A toy garage would make a wonderful gift for a young child, and would appeal especially to a little boy. Most, my own included, are attracted to cars and all things that move, so would be delighted with somewhere to park all their vehicles and to use as a base for imaginative games.

But how do you choose the best toy garage? This is a traditional, classic toy that has been around for decades and will still be popular for generations to come. There are many on the market, at greatly varying prices. Of course, you could buy a cheap, plastic version, but in my opinion these often look rather inferior and do not have the durability of the more expensive, wooden models. Cheap plastic is liable to breakage, particularly when affronted with rough play - and let's face it, little boys are not exactly known for being gentle.

My choice would be to purchase a toy garage that is both strong, has enough features to keep your child interested, and looks reasonably pleasing to the eye. After all, a garage can be quite a large toy, meaning it will often end up being left out on display in the corner of a room. I would also look for something which is built to last, and can hopefully be passed down to any future children - and, although many parents do not often purchase toy garages for little girls, you will be surprised at how many girls do enjoy playing with them, especially when they belong to a sibling and are already in the house.

Features to Look For in a Toy Garage

Based on my own observations, I have concluded that a children's garage is not worth the box it comes in unless it has one of those rather cool slopes for the cars to whizz down, and preferably more than one. This is the most 'fun' feature for most children - my own son was playing with a garage on display in a newly opened shop the other day - I could not drag him away from his pursuit in sending all the cars shooting down the slope and watching them speed to the levels below, again and again and again. We actually have a small garage at home, purchased as a gift by a well-meaning relative last year, which has no such facility - this toy is lucky to ever see the light of day because it just isn't fun enough.

The second very important feature, in my opinion, is one of those elevators which will raise or lower the cars to the next level. Usually, these work by winding the handle, and are very popular as boys tend to like toys with working mechanisms. 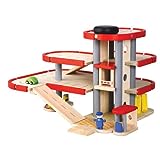 I just love Plan Toys - one of the most ethical and ecological toy manufacturers that I have come across. Plan Toys boast excellent credentials, and never use toxic chemicals in the production of any of their toys. They use E-Zero glue and eco-friendly, chemical free, recycled rubberwood to construct all toys, and finish them with water-based, non-toxic colors. As a parent of a young child myself, this fills me with great confidence that my child will not come into contact with anything harmful during play.

Plan Toys Parking Garage has three storeys, with two exciting ramps to push cars down. There is also an elevator, to raise or lower cars to different levels, and a helipad right on top (note that this toy does not include a helicopter, though Plan Toys do sell this separately). A mini play-figure, gas station and pretend car wash are all included, but vehicles are not. The ramps are actually detachable from the main construction of the garage, and have to be slotted into place (they can be glued if necessary).

Another reason why I am rather biased towards the Plan Toys Garage is the opportunity to connect it up with the Plan Toys Road Systems, either standard or deluxe. These Road Systems are great because your child can build their own road layout, just as with the wooden train systems. In fact, popular wooden train sets like Brio also connect up with these Road Systems, or you can even purchase the PlanToys Road and Rail Set (see right).

When I was a child I had a build-your-own-road toy, which was actually not the best quality - it was made from thin cardboard that soon became dog-eared and flimsy . However, I was able to build my own road, and it was a very popular toy in my house. These days, play roads are so often nothing more than a 'mat with a picture of a road on', with no room for self-construction or imagination. This is not fun, and does not educate your child in the skills of successful construction. What's more, part of the fun in playing with such toys is putting it together. 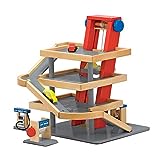 Melissa and Doug is another company that make brilliant, ever-popular toys for kids. They have a huge, ever-expanding range (we have some of our own and they have always been fantastic). This wooden parking garage has everything a child needs to play great car games, though it does not have the scope for adding road attachments, as with the Plan Toys version (of course, you can always set is beside an alternative road set). This example does has the essential elevator and four floors, giving it three fun ramps to push cars down. It also includes two fast-rolling cars, a gas station, car wash and till booth, complete with attendant.

Here we have a toy of high quality, and very durable, meaning that it should be able to be passed down to subsequent children and withstand the often rather heavy play of little boys. It has received excellent reviews from satisfied parents, and would make a fantastic gift for a car-mad boy - it is suitable for all children from age three upwards.

This garage from KidKraft is not wooden, but actually made of strong fiberboard (MDF). Whilst I am not particularly a fan of MDF, I still felt it was worth a look as it has received so many excellent reviews. Indeed, it does have some wonderful features which will delight a young child, and it comes with 6 vehicles included, plus four mini-figures, a helipad and a helicopter. There is also a winding elevator which will take cars right up to the top level, and a car wash with scrubbers that actually move. One of the aspects of this set which will really impress a young child is the fact that the cars, when pushed from the top ramp, will actually zoom down the entire three floors, right to the bottom. With most garages, this simply does not happen - usually the child will have to push cars down each ramp separately.

There is a lot of detailed picture design on this fantastic product, and it has the usual ticket booth and barrier, plus gas station for filling up. This is a toy that really could keep a young child entertained for hours. All in all, a very good product with some stand-out features.