The history of the teddy goes back over one hundred years although there is some debate about exactly who and how they came into being.

So how do you find out if your old teddy is valuable or just lovable?

Even though most teddies are not be valuable, some of the best known makes are profitable enough to attract fakers. If you want to collect teddy bears, you need to know how to sniff out the genuine ones from the fakes.

The History of the Teddy Bear - Steiff Bears

One of the most notable births of the 20th century was that of the teddy bear, the delight and comfort of children and adults for over one hundred years.

There are two claims for the invention of the teddy bear. One belongs to German toy designer, Richard Steiff, who is said to have seen performing bears in a circus when he visited America.

This gave him the idea for a new toy: a bear that had jointed arms and legs and could turn its head, just like a doll. In 1903, he exhibited his new toy, called Friend Petz, at the Leipzig Spring Toy Fair.

I've always liked the more scruffy looking bears like this one. 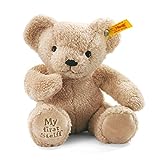 Here's an ideal gift for a new baby. The clue is in the name.

More History of Teddies from the USA

Meanwhile, in the USA in 1902, President Theadore (Teddy) Roosevelt went on a hunting trip which was unsuccessful.

The story goes that his aides procured a bear cub for him to shoot to compensate for his lack of success but he refused to shoot it. The following day a cartoon illustrating the incident appeared in newspapers all over the United States. It was seen by Morris Michtom, the owner of a Brooklyn candy store, and it sparked off the idea for a new toy: Teddy’s bear.

He worked out the design for a jointed bear and his wife made them. Sold in their candy store, Teddy’s bear was an immediate hit. It was such a success that the store was closed and Michtom started the Ideal Novelty and Toy Company, one the largest toy companies in the world today.

From these small beginnings teddy bears have become one of the most popular toys ever with toy manufacturers in Britain, Europe and America making their own versions of the teddy.

NOT the World's Most Expensive Bear! 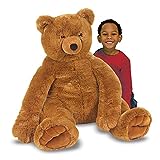 This big bear is not cheap but it doesn't cost £110,000 (British Pounds). It is the perfect gift for anybody who wants an enormous bear, though.

Actor, Peter Bull, was one of the most prominent teddy bear collectors and probably one of the people who helped to make collecting bears as popular as it is today.

He toured the USA with his collection of teddies and the bear that appeared in Brideshead Revisited belonged to him.

Sotheby’s held the first teddy bear auction in 1982. The world record price for a bear was achieved in 1994 at an auction at Christie's, London. It made £110,000 (British Pounds). It was sold by a Colonel Bob Henderson and bought by a Japanese collector who is said to have booked the bear his own first class seat to fly back to Japan.

There are more expensive teddy bears for sale but they are new and made for multi-millionaires.

A Selection of Antique Steiff Bears

Get Tips from the Video

This video of antique Steiff bears is great to watch if you love teddies. Some are still cute, while others look sad - those are the ones who look like they've had hard lives. Maybe they have just been well-loved but now feel abandoned.

There is a practical reason to watch the video if you want to collect teddy bears. Look at the pronounced snout and hump on the back of old Steiff bears. Over the years, both features have disappeared but are noticeable on old bears. Watch out for these when someone is hoping to sell you an antique bear.

When collecting teddy bears, authenticity, provenance and condition is of paramount importance.

First of all you need to identify your bear. Take a good look at him and carefully examine all his parts. Feel him too so that you can identify the stuffing. The first bears were stuffed with wood shavings (wood wool), then in the 1930s kapok and wool waste began to be used although wood wool was often still used for the head. Because of this, a bear with a softer body is unlikely to be pre-1930.

A label on the bear is a good clue to its maker but not an infallible one! The most valuable and desirable bears are those made by the German company Steiff. They have a small metal button in the left ear and the design on the button can identify the period of manufacture. The company used an elephant on the original button from 1903. Other desirable manufacturers include Ideal, Bruin, Chad Valley, Farnell, Merrythought and Chiltern.

The fur on early bears was usually mohair fabric, later, other fabrics were used: in the 1930s, fabrics like silk or cotton plush and, after the 1950s, synthetic materials. The paws on early good-quality bears were made from felt, or on cheaper ones, brushed cotton. From the 1930s some bears had paws made from a leather look cotton fabric, velveteen or just from using a different coloured plush.

Who Murdered the Teddy Bear?

Care and Repair of Teddy Bears

If your bear is a much loved reminder of your childhood, you will still want to care for it and make sure its condition doesn’t deteriorate.

Insects and Other Bugs
When you buy a collectable teddy bear, you need to take precautions in case it is infested with bugs like the larvae of the furniture beetle, moth larvae or even fleas.

Put your bear inside a plastic bag with no holes in it and then seal it and put it in the freezer for a few days. If it’s a large bear, leave it for at least a week. Alternatively, you can put moth or other insect repellent in the bag and leave it sealed for around 2 weeks.

When you take the bear out of the sealed bag and when it’s completely dry if it’s been in freezer, gently brush the fur.

Inspect your bears regularly for signs of infestation. You might find small holes in the pads of feet or paws or the papery casings of larvae cases.

Regular Cleaning
You can use a vacuum cleaner on your bear but do it with care. Cover the nozzle with a piece of fine net curtain or part of a pair of tights (panty hose) so that you don’t accidentally suck off an eye, label or stitching.

If your bear needs a bit more than a vacuum clean, you can sponge it but very carefully.

Using warm water and a small amount of very gentle soap liquid, well mixed, with a soft cloth or very soft brush (a baby’s hairbrush, for example), carefully wash the fur but without wetting the backing fabric. Then use clean, warm water to remove the soapy water. You can use a hairdryer on warm but not hot to gently dry the bear. Otherwise, gently towel dry. Whichever way you dry your bear, put it somewhere warm like an airing cupboard for a couple of days to remove all traces of damp.

If your bear is more modern, it should come with washing instructions and these should be followed.

Top Tip - Use your nose to sniff out a fake.

Does the teddy smell as fresh as if it was made yesterday? If it does, perhaps it was! An old bear usually has the fusty, dusty smell of age and without that, perhaps you should think twice before spending too much money.

How to Make a Teddy Bear

How do you feel about teddy bears?

Do you still have your childhood teddy bear?