Doctor Who action figures - the perfect gift for fans or collectors of any generation!

One of the secrets behind the success and longevity of the BBC science-fiction TV series Doctor Who has undoubtedly been one of the Doctor's own extraordinary abilities as a Time Lord - when he is ailing and on the point of death he can regenerate into a new body, with a change in not only physical appearance, but also personality.

This masterstroke of writing has allowed the show itself to be rejuvenated numerous times over the decades, from the first black and white episodes of the 1960s starring William Hartnell as the First Doctor, through to the present day show starring whipper-snapper Matt Smith who plays the Eleventh Doctor. Peter Capaldi will become the Twelfth Doctor when Smith leaves the show at the end of this year, making his first appearance in the 2013 Christmas Special.

Whilst Mego and Denys Fisher launched a hugely successful UK-only action figure line featuring the enormously popular Fourth Doctor played by Tom Baker way back in 1977, and Welsh firm Dapol brought out some rather good action figures in the late 1980s, when the BBC relaunched the all-new Doctor Who series in 2005 the action figure merchandising around the show escalated enormously, allowing fans to collect each and every one of the eleven doctors so far, as well as a universe of villains.

This lens is an introduction to each of the Doctors and their associated action figures and features reviews and even fan-made video recreations of favourite episodes entirely realised in action figures! Don't to forget to vote for YOUR favourite Doctor and leave a comment before you go!

When the hugely popular David Tennant left Doctor Who in 2010, he left some very big boots to fill for the relatively unknown Matt Smith in the role of the Eleventh Doctor. I fell in love with Smith's young-old-innocent-wise spin on our beloved Time Lord from the very first episode when he crashes into the young Amy Pond's garden in the episode "The End of Time, Part Two". Smith is the youngest ever actor to play the Doctor.

Like the Doctors before him, he has a distinct look - he wears a tweed jacket with a bow tie and braces, trousers which are a tad too short, showing his ankle boots.

His exclamation "Bow ties are cool!" early on has become a running joke in the show whenever he attempts to incorporate another unlikely element into his wardrobe such as a fez - "I wear a fez now, fezzes are cool" - or a stetson - "I wear a stetson now, stetsons are cool"!

Big Chief Studios Doctor Who: 11th Doctor 1:6 Scale Collector Figure
Recreate scenes from the 'Eleventh Hour' with this twin pack that features two incredibly detailed and authentic Eleventh Doctor five inch action figures. When the Eleventh Doctor's TARDIS crashes into the garden of young Amelia Pond, he is still wearing the remains of the Tenth Doctor's suit, ripped and raggedy from the damage after the TARDIS control room exploded. After he departs, Amelia grows up, telling her friends about 'The Raggedy Doctor', making dolls and puppets of him. When he returns to her life after twelve years, he's still wearing the same battered clothes but, shortly before facing down the Atraxi, he selects for himself a new outfit, 'borrowed' from various lockers at the local hospital. Tweed jacket, bow tie and boots in place, the Eleventh Doctor is now ready to face the future...
Buy Now

If Tom Baker's fourth incarnation was the definitive Doctor for kids of the 1970s, David Tennant's is the runaway favourite Doctor for the younger generation of children growing up on the revamped series. In the role from 2005-2010 - five years is an eternity for kids - his final appearance was a genuinely moving affair that had grown Whovians reaching for their hankies.

His outfit usually comprised a tight fitting pinstripe suit, Converse sneakers and a long faux-suede overcoat, and was inspired by the outfit British TV chef Jamie Oliver wore during an interview with Michael Parkinson.

I have to admit, I was really excited when I first heard that the BBC would be relaunching one of my all time favourite childhood shows Doctor Who. The all new 2005 revamp was better than anybody could possibly have dreamed, and the actor chosen to fill the part of the Ninth Doctor, Christopher Eccleston, was spot on.

Deeply troubled after the Time War which had destroyed his race, this moody, gritty Doctor was sadly to last one season only, but Eccleston's formidable performance was hugely important in bringing critical credibility to the relaunched Doctor Who.

His look was that of the man in black - a short black leather coat over black trousers. Utterly cool!

Vote for YOUR favourite Doctor Who of all time! - Please vote below!

Who is YOUR favourite Doctor Who of all time?

The Eighth Doctor was portrayed by Paul McGann, best known to international audiences for his starring role in the cult movie Withnail and I. Whilst his portrayal had been intended to kickstart a whole new series of Doctor Who, as it turned out his one and only appearance was in the 1996 Doctor Who television movie.

The Eighth Doctor may have appeared in only one television film, however, in many ways he is the most prolific of them all having appeared in numerous parrallel stories published as novel, novellas, short story and audio episodes. Indeed, McGann continues to portray the Eighth Doctor in the various audio spinoffs shows and seems, as with his Withnail role, to have achieved true cult status as the Eigth Doctor.

His look is pure Victorian elegance - a long green velvet jacket, a waistcoat with a pocket watch, a cravat, and his hair is long and wavy.

I confess I completely missed out on the Seventh Doctor, played by Sylvester McCoy. He took up the role in 1987 and continued playing the part until - horrors of horrors - the BBC cancelled Doctor Who after 26 years of continuous broadcasting in 1989. Sadly, his tenure coincided with me starting art school, leaving home and going off to university - life changing distractions which took me away from the television screen! I do like his look, however, with his hat, paisley pattern scarf - which was, incidentally, all the rage in the 1980s in the UK - and umbrella.

After the sensitive Peter Davison's fifth incarnation, the downright haughty and arrogant Sixth Doctor as played by Colin Baker, was perhaps a more difficult Doctor for audiences to like. Appearing in only three seasons from 1984 - 1986, like McGann the Eighth Doctor, Baker later proved hugely popular in the Doctor Who audio adventures.

His overbearing personality was perfectly matched by his bold, brash and mismatched costume - the action figures of Colin Baker are a joy because of just how well his costume is reproduced!

When Tom Baker finally hung up his Doctor Who scarf in 1981 the BBC decided to use a much younger actor for the fifth incarnation, to give a fresh new feel to the show. They didn't go so far as to risk an unknown actor, however, and instead went for the already popular Peter Davison, an actor familiar to British television audiences for his portrayal of veterinary surgeon Tristan Farnon in the hit show All Creatures Great and Small.

I remember really liking this new, rather sensitive Fifth Doctor as a child, and particularly loving his costume, which was a new spin on a traditional Edwardian cricketer's uniform, worn with plimsoll shoes, a Panama hat, and most eccentrically of all, a celery stalk in his lapel!

Buy the Fifth Doctor and the Master action figure pack

Underground Toys Fifth 5th Doctor Who and the Master SDCC Comic-Con 2010 Action Figure
The definitive Peter Davison figure which includes his trademark Panama hat. The likenesses of both Davison and Anthony Ainley as The Master, are incredibly accurate.
Buy Now

Tom Baker was the actor who became the definitive Doctor for anybody of my generation. Taking over the role of the Fourth Doctor at the end of 1974, he stayed with the series for seven consecutive seasons until March 1981. Indeed, his portrayal remains the longest of any of the vintage or modern era Doctors, and he is instantly recognisable, even in the United States. Some of my favourite all time Doctor Who adventures, such as The Talons of Weng-Chiang and The Hand of Fear, starred the eccentric Fourth Doctor. He also shared his adventures with the enduringly popular K-9, the robot dog, and one of the most popular companions of all time, Sarah Jane Smith played by the late Elisabeth Sladen.

He is famous for his impractically long scarf, wide-brimmed hat, and long overcoat with bulging pockets full of jelly babies. The character's look was apparently inspired by posters byÂ Henri de Toulouse-Lautrec of his friendÂ Aristide Bruant. 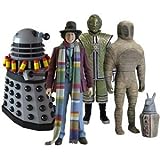 Doctor Who - The Fourth Doctor Adventure Set
Straight from the much-loved BBC classics follow the 4th Doctor in his many time travelling adventures! Re-enact Tom Baker's fight against the mummies from 'Pyramids of Mars' (1975), his encounters with Voc robots from 'The Robots of Death' (1977) and even his war with the Daleks in 'Destiny of the Daleks' (1979). All three of these villains are brand new to the Doctor Who classic toy line and are only available in limited quantities as part this collector's set.
Buy Now

Jon Pertwee starred in Doctor Who as the third incarnation appearing in five seasons from early 1970 to mid-1974. Jon Pertwee was, in fact, the first Doctor I remember watching on BBC television in the UK as a small child. I remember adoring him and being extremely disturbed when he transformed into the Fourth Doctor played by Tom Baker! Looking back now I can see how the whole regeneration concept might have been rather troublesome to my six-year-old self!

I've always loved the Third Doctor's outfit too. He was something of a dandy, with a sumptuous velvet smoking jacket in a variety of different colours, and a frilly shirt. Curiously, although I'm pretty sure I must have watched those early episodes on a black and white television, I distinctly remember the deep blue of his jacket!

Patrick Troughton would seem to be the Doctor's Doctor. He played the Second Doctor from 1966 - 1969 and has been named as Peter Davison, Colin Baker and Matt Smith's personal favourite incarnation. He returned to the series for its 10th anniversary serial The Three Doctors, for the 20th anniversary special, The Five Doctors, and again in 1985 in The Two Doctors. Sadly, Troughton died in 1987 so his appearance in the fiftieth anniversary special slated for the end of 2013, will use archive footage.

We may take it for granted now, but it is to Troughton's enormous credit that TV audiences back in the 1960s accepted a new, changed protagonist in Doctor Who.

His costume featured a bow tie - Matt Smith's modern costume is a homage to that detail.

William Hartnell – the legendary First Doctor – was the protagonist of Doctor Who before audiences even knew that he could regenerate. In fact, they would learn very little about his background – he was simply a mysterious time traveller from another world, in a time machine called the TARDIS, which was disguised as a police box. Seemingly frail, yet with great willpower, he could sometime be cantankerous.

His costume was Edwardian in style and he carried a wooden walking cane. An action figure of William Hartnell is essential for any Whovian.

Are you a Doctor Who fan? Please leave a comment before you go!