The Eeth Koth LEGO mini figure is a cool Jedi Master with an elaborate head brick specially made for the character. LEGO Eeth Koth was released in 2011 and was included in the

When I saw the Republic Frigate set from LEGO I was very interested in it because of the two new Jedi mini figures included in it. Sure, Yoda is cool and if you are making an army Clone Troopers are always good, but the Eeth Koth and Quinlan Vos figures were the most exciting aspect of this set for me and most fans.

I remember seeing Eeth Koth, briefly, in "The Phantom Menace" and more of him in "the Clone Wars" series so I was keen to see the LEGO mini figure of him. Here I will highlight this new mini figure and the Republic Frigate set that he appears in.

I hope you enjoy looking at these Star Wars LEGOs.

Had You Ever Heard Of Jedi Master Eeth Koth Before?

Did You Know About Jedi Master Eeth Koth?

Well, I guess it is obvious by now that Eeth Koth was a Jedi. In fact he was a Jedi Master and a member of the High Council in the last years of the Galactic Republic and can be seen in this role in the movie "Episode I; The Phantom Menace" and also briefly in "Episode II; Attack of the Clones", on both occasions he does not speak.

Eeth Koth was a Zabrak, a race endowed with extreme mental discipline and tolerance of pain which allowed him to endure General Grievous's torturing in an Episode of "The Clone Wars" digitally animated series. In fact, it is this series in which fans can see the most of Jedi Master Eeth Koth, similarly to many of the other Jedi characters.

You can read much more about this character here - Eeth Koth on Wookiepedia. 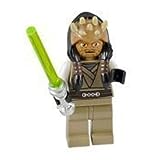 Eeth Koth - Lego Star Wars Minifigure
Eeth Koth is another Jedi master that can join the ranks of your Lego army of the Republic and battle separatists droids, bounty hunters and Sith. This mini figure is highly detailed and rare, making it all the more desirable for collectors of Star wars Lego.
Buy Now

A superb hair brick gives Eeth Koth an authentic look with his horned head and pig-tailed hair.His face is nicely printed and gives him a rugged expression.Highly detailed printing on the torso makes him look like he is dressed as in the movies and series.He comes armed with his cool, green light saber.

There is no printing on the legs which are just plain.This mini figure has no cape, which he should have to match the clothing he wears.

Eeth Koth - All about the LEGO mini figure and his appearances in LEGO sets and computer games on Brickpedia.

Eeth Koth - Everything you could possibly want to know about this Jedi Master and much more. Information about his character and actions in the Star Wars expanded universe.

Fans of Star Wars love light saber fights. I can remember waving my light saber around along Oxford Street in London after my mother bought it for me one Christmas. In this video clip from "The Clone Wars" series 3 Jedi Master Eeth Koth can be seen having a light saber battle with the evil General Grievous.

This scene is the first time that fans get to see Eeth Koth as one of the main protagonists in the protracted story.

This is the cool LEGO set that contains the new Eeth Koth Jedi mini figure. It is one of the larger spacecraft in the Star Wars theme and makes an interesting creation to build - actually making the model is a large part of the fun with LEGO after all.

As with most of the recent sets, this features lots of interesting parts, hatches, weapons and other moving parts, making for maximum playability. This really is a great Star Wars LEGO set and it contains no less than 3 cool Jedis - two of them being new mini figures.

Buy Your Own Lego Star Wars Republic Frigate on Amazon.com

Swoop into battle with this Republic Frigate made from 1015 pieces to attack the separatist forces in the Clone Wars. This incredibly detailed spaceship features an escape pod which can disengage from the main ship, an opening cockpit, rotating laser cannons, a proton torpedo launcher, opening hatches and a retractable undercarriage. This superb LEGO Star wars model also comes with two "Wolf Pack" Clone Soldiers, Yoda and all new Eeth Koth and Quinlan Vos Jedi mini figures.

Please Take A Look At Some More Star Wars LEGOs

Geonosian Lego - Geonosian Warriors, pilots and zombies line up to fight the Clone army. These sets provide some unusual but detailed mini figures to add to your battles.

Lego Jawas - The Jawas were such fun characters and here is their giant Sandcrawler in LEGO along with Jawa mini figures.

Lego Embo - Star Wars Bounty Hunter - The Embo mini figure and the sets he appears in. This is one of the coolest Star Wars LEGO mini figures - take a look.

Bossk Lego - The Bossk bounty hunter, from "The Empire Strikes Back", mini figure and the sets he is included in.

Lego Slave 1 - LEGO Slave 1 models; both Jango Fett's version and Boba Fett's Slave1. If you are a fan of this bounty hunter's spacecraft then take a look at this.