Aigh! Someone just bought fake Final Fantasy Trading Arts minis from an eBay ad on one of my pages!* Let me show you how to tell fake Square-Enix Trading Arts figures from real ones, so you don't make the same mistake.

My method isn't fullproof: there's no guarantees when you buy something online. But this way you'll be able to spot obvious Chinese counterfeits.

Left: Photo of my

*I can see what was bought, but not by whom. I earn a few pennies of commission from items bought through my pages, but I'm a fan, and I don't want fellow fans getting ripped off!

So here's Tidus as a Final Fantasy Tradin Arts Mini figure. Ain't he cute? (I resist the urge to show mini Auron for this demo.) The eyes on these figures are adorable, the likenesses are superb in miniature, and tiny details like zippers (of course, it's a Nomura design), jewelry and stripes are picked out with exacting detail. Some even have hair highlights!

Amazingly, this photo is larger than the actual figure, which is only two inches tall.

Final Fantasy Trading Arts Mini figures were originally released in "blind boxes": you didn't know which figure was inside! Hence "trading arts": Japanese Final Fantasy fans collect and trade them. After a while, they are re-released in boxed sets: Vol. 1, Vol. 2 and so on. The boxed sets often contain a "bonus" secret figure, like Rikku from FFX-2.

Unfortunately, because these figures are tiny (barely over 2" tall) and all of one piece, they're much easier to counterfeit than the large, jointed Final Fantasy Play Arts Action Figures. I'm guessing that counterfeits are cast off originals so the details are just a little rougher, and pieces like Aerith's staff and Balthier's gun tend to be bent. Fake Trading Arts mini figures often don't fit in their bases. Worst of all, their paint jobs are far less detailed and accurate than the original.

Here's a Tidus figure I found for sale on eBay. eBay listings seldom have high-quality photos, but even this photo shows some telltales. Notice the details, especially the red "Zanarkand Abes" symbol on his pants leg-- whoops!

The more you look, the more you see: no stripe on the sword pommel's tassel, no bracelet, no zippers (designer Tetsyuo Nomura would have a coronary), no yellow shoes.

I've got all of these except Cloud (wah!) The easiest way to spot a fake in this set is to check Yuna's skirt: on the counterfeit, it's painted a solid light blue with no white shading. Also, if you can see the tip of her insanely long ponytail, the tip down by her feet should be brown, not red.

Fake Vaan also loses the detailing on the sides of his hips and thighs, as well as his pectoral (chest necklace).

I've set this widget to search for "final fantasy mini vol 1" with a few qualifiers to keep out wrong results, but you never know how people will label their sales. Also, this is liable to turn up single figures from the boxed sets.

So take a look here for bargains, but be careful and follow my tips above.

This is actually how I picked up Vol 1 and 2. I found an honest seller with them packed in their original baggies, but not the boxes, so I got all ten. They are the real deal.

Look for the different-colored beads on Auron's jug of nog, or the stripe on Tifa's gloves. The fake listings I've seen are missing those details.

My eBay widgets ONLY find "Buy it now" listings from Top Sellers, and only show the first result. There will be more listings on eBay, but you'll have to look for them yourself. Things to try, in various combinations

Rikku is really, really hard to find. This is also one of the easiest batches for which to spot fakes.

I've already shown you the fake Tidus above, with the yellow "Abes" symbol on his pants and lack of yellow shoes. Also, fake Balthier's cuirass (armored vest) has zero detail, and his belt buckle is conspicuously absent.

Final Fantasy Trading Arts Vol. 3 Mini Figure Set of 4
I just love Balthier and Fran. It's their Revenant Wings look! Click the large-size image above for several good detailed photos of these. Aerith, Tidus, Balthier, Fran Japan exclusive: Rikku (REALLY rare, NOT shown in Amazon listing although a third party seller might include her -- check if it says "set of 4" or "set of 5")
Buy Now

This may be the only way to find Rikku. As usual, watch out for fakes. If you can't see her yellow braids falling in two u-shaped loops over her blue headband, it's a knockoff.

I haven't seen fakes on these, but I'd guess that they skip painting the white hyacinth pattern on Yuna's skirt. I still need to add all of these (or at least Yuna and Sephiroth) to my collection.

By the way, check out this great close-up by collector Manveri. He/she has good photos of all the Trading Arts mini figs. Zidane, Sephiroth, Yuna — they all really come to life when you see them up close.

The FFIII and FFIV Trading Arts Figures are based the 3D remakes of these games, which I played on iOS; I think they originally were released on Nintendo 3DS.

These aren't on Amazon, but sometimes turn up on eBay. I'm guessing you're fairly safe from fakes; it's the more popular characters like Cloud, Yuna, Balthier, Tidus and Squall that get counterfeited.

Good to see Refia the blacksmith's apprentice gets a lot of the limelight— she's snarky and smart and my favorite character from the remake. Unfortunately, her Dark Knight and Magus figures don't come in the usual boxed set; they were Japan exclusives (found in blind boxes), so they're rare.

They tend to be available for sale individually, but now and then you can find the whole set if you go to eBay and hunt. (Try searching for "Final Fantasy IV Mini Set")

I'm afraid I don't know any of these little floofs besides Shantotto, hilariously voiced by Candi Milo (Lucil, Lady Dona and Pacce in Final Fantasy X).

Again, if you go to eBay and search for "Final Fantasy XI mini set," you may find all of them; for some reason my widget's being cranky.

There are several "Bandai" Mini Final Fantasy figures which are not exactly fake, in that it's a real Japanese company imitating Square-Enix toys, but they're not licensed and official Square-Enix products. And some are copies of Trading Arts Minis with poorer paint jobs.

On the other hand, Bandai has supplemented the "official" line of Final Fantasy Trading Arts Mini figures with Kadaj, Loz, Yazoo, Cloud and Tifa in Advent Children outfits, Nooj and Paine from FFX-2.

The Bandai figures are actually the source of most of the "Final Fantasy Mini" keychains. Some are pretty cute, even if the quality isn't quite as good as the official Trading Arts minis. 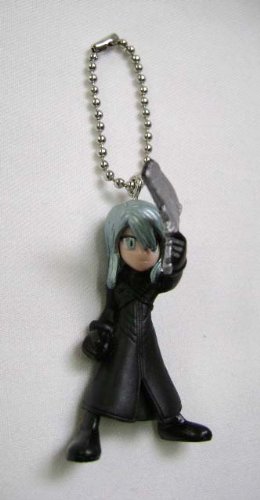