9 Games Like Plants vs Zombies - Other Tower Defense Games

Plants vs Zombies (PvZ) is a popular casual tower defense game published by PopCap that has received strong praise from critics for its gameplay, humorous undertones, long game length and variety of gameplay options.

Plants vs Zombies started my love for PopCap Games (I later got hooked on Peggle). Their ability to produce high quality games has still been unmatched in my opinion.

Size Doesn't Matter In This Game Like Plants vs Zombies

Tiny Defense features the same side view tower defense style of Plants vs Zombies but instead features miniature robots.

The game takes place on Green Planet, which is the home to small mechanical life forms, simply known as Mini Robots. All was peaceful until one day they were invaded by an army of robots known as The Machines. You must help defend the peaceful Mini Robots as they try to reclaim their planet.

Mini Robot Wars features 150 levels, 30 mini-games, 40 Mini Robots and over 30 Machines to battle. Mini Robot Wars also offers achievements and a number of different areas to add an extra element to the game. The game is without a doubt the best iPhone game like Plants vs Zombies.

Garden Rescue is a Big Fish Game like Plants vs Zombies. The game has you protect your peaceful garden form a number of insects that would love nothing more than to destroy your garden. However, the plants of your garden have other ideas and rally to defend their home with you in command.

Kill insects, earn coins, plant a variety of plants and upgrade them to increase your chances of survival. With 3 difficult levels and a large variety of plants Garden Rescue will no doubt keep you busy for ages to come. The game is available through the Big Fish Games website with a trial version is also available.

Elements vs. Monsters is a lane based Plants vs Zombies game. This fun and addicting mix of genres is available on your iOS and Android devices making it accessible to all smart phone users.

In the game you'll have to command and upgrade your four elements to fight off incoming waves of enemies. Each element has their own attributes and strengths which you have to combine to defeat your opponent (or boss) for each level.

With multiple lanes to use the game does challenge you to think strategically. If you love Plants vs Zombies the style offered by Elements vs. Monsters is an easy decision.

The game puts you in the role of a young boy that can't sleep because of nightmares, these nightmares come in the form of a number of creatures such as goblins, ghosts and even vampires. The only thing you have to defend yourself is your trusty toys (such as lego, army men and teddy bears).

In order to bring your toys to life you require fantasy (which works like sun from Plants vs Zombies), this fantasy is generated from books (much like Sunflowers from PvZ). As you advance through the levels you will also collect coins which can be used to unlock new units and upgrades.

A Pirate Based Free Game Like Plants vs Zombies

Pirates of Teelonians (PoT) takes the Plants vs Zombies formula into a pirate setting and delivers, making for a great game like Plants vs Zombies. The game also injects some of its own innovation making the game an exciting gameplay experience.

One such innovation is the inclusion of a Pirate Captain, there are three available and each comes with their own abilities, strengths and weaknesses. The Pirate Captains are essentially a movable turret which can be moved between each row to temporarily boosts your defenses for that row. Units can also be upgraded with a number of benefits to make them more potent.

Just like Plants vs Zombies there is also a number of different mini-games thrown in to break up the levels.

Defend Your Garden In This Game Like Plants vs Zombies

Garden Defense takes place in Lindencroft which has recently come under attack by a number of flower eating pests. And it is up to you to defend their flowers by using the various garden tools, plants and inventions available. By defeating your enemies you will gain money which you can use to beef up your defenses or upgrade the inventions you already have.

Garden Defense has good replay value thanks to its 5 different difficulty settings that can take some serious planning to beat (on the harder settings). The game can be played for free (demo) or purchased for the bargain price of $6.99.

Garden Defense offers hundreds of scenarios for you to play and features addictive gameplay combined with colourful graphics to make a great game like Plants vs Zombies. 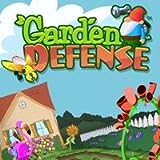 Garden Defense [Download]
Help the Smiths save their flowers from flies, ants and slugs in Garden Defense. Outfit your garden gnome with a rocket launcher, plant a variety of deadly plants or use a collection of battle hardened bugs. With plenty of available upgrades and a variety of levels Garden Defense is a great tower defense game.
Buy Now

A Game Like Plants vs Zombies By Big Fish Games

Monster Mash is another game like Plants vs Zombies brought to you by Big Fish Games, The game takes place in the Curly Valley, which has recently come under attack from a number of strange monsters.

The mission falls on you to protect the villages from these invaders using a number of towers (which can be upgraded throughout the game). The game features unique storybook art, over 20 tower combinations and a number of cut scenes to encourage you on your way to victory.

As the game is published by Big Fish Games there is a 1 hour Demo available.

Grub Guardian comes from the team that brought you the popular MMORPG, Wizard101. Grub Guardian is the first of many planned free to play games that can link to your Wizard101 account (not required though). This first offering is a highly addictive and challenging tower defence game based within the Wizard101 universe (no knowledge of Wizard101 required though).

In the game you'll be protecting your grub that you've reserved for your pet from the endless swarms of hungry enemies that want nothing more to eat you're food. Depending on which pet you decide to choose you'll have a variety of different ultimate powers to help you fend off enemies when you get over run.

With a huge selection of maps, high scores, medals, varying strategies based on your chosen pet and the option to unlock Wizard101 goodies if you link up your account.

Grub Guardian is one of the best free to play tower defence games released in recent times ensuring that players of all skill levels have a challenge ahead of them.

The Creeps! is another tower defense game like Plants vs Zombies that offers exciting gameplay and has even been featured by Apple as the best tower defense game. The game is available for free on iPhone with more levels being available through premium purchases.

The game focuses on protecting yourself from a number of of creepy things that live in your closet. Your weapons include toy blasters boomerangs and flashlights.

If you are looking for a game like Plants vs Zombies for iPhone you can't look past The Creeps! With its fun art style and large number of levels (across many different themes) you'll be playing it for hours on end. The Creeps! holds a strong 4/5 star customer rating in the iTunes Store.