I don't know about you but when I see some of the amazing Harry Potter Lego Sets that are available I wish I was a kid all over again!

But actually (don't tell anyone!) I don't think we really need an excuse to be able to create some of the amazing scenes that lego enables us to do we?

Many years ago I visited LegoLand here in the UK and I must admit I was enthralled. Maybe even back then the creators were casting some of the spells that we are now familiar with through Harry Potter.

The Harry Potter Lego Sets are bound to be a big hit this year! Imagine all the fun of recreating Hogwarts School in Lego! Perhaps you (or should that be your kids) will love creating Lego Harry Potter Professor Lupin's Classroom or maybe Gringotts Bank or Slytherin House appeals?

Maybe you could start simple with the Lego Sorting Hat before you build up to the truly stunning Lego Harry Potter Hogwarts Castle. Whichever of the Harry Potter Lego Sets you choose you and your kids are bound to have hours of truly magical fun!

Lego Brings Hogwarts and Harry Potter To Your Kids!

Isn't it amazing how throughout the years the Harry Potter phenomenon has continued to capture the imagination of so many!

The range of Harry Potter LEGO Sets that are available give your the perfect range of gifts for a child that they can use for years to come. The younger fans can use it as they grow and with many of the LEGO sets there are board games that they can continue to use as they get older.

LEGO has managed to combining the magic, excitement and mystery of the Harry Potter saga with their famous building blocks. All kids loves to stretch their imagination by creating their own masterpieces and now they are able to incorporate their much loved Harry Potter movie characters into their play and designs.

LEGO have again managed to bring a popular image to their world with another Harry Potter LEGO Set which this time is the LEGO Harry Potter Hogwarts Castle. It's a great new way to experience the wonderful Harry Potter saga.

This Harry Potter LEGO set has everything that you need to bring the adventures of Hogwarts castle to life. There are a total of 11 characters including Harry Potter, Hermoine Grange, Professors McGonagall, Snape and Flitwick, Argus Filch and his cat, Mrs. Norris, Albus Dumbledore, Lord Voldemort and 2 dementors.

The castle has intriguing areas built in so that you can create even more intrigue while playing. There is a fireplace which features Sirius Black's face located in Gryfindor's common room. Sirius's face actually appears in the fire, itself.

When you reach Dumbledorf's office you will find the Sorting Hat, a Basilisk Fang, Gryffindor's sword and a set of secret sliding stairs. Make sure that you don't forget to look for Rom Riddle's book, which is hidden in the knight's armor.

The interior of the castle has some amazing detail, and by way of example the library's restricted section and the Great Hall are both decorated in Gryffindor and Slytherin colors.

There is an amazing 1,290 LEGO pieces in this Harry Potter LEGO Set which can be used to construct the castle. They are designed to the high standard of all LEGO and make the set a remarkable piece to play with. Once you have finished constructing the LEGO you will have a finished product which stands at almost 23 inches by almost 15 inches.

There are three instruction booklets with this Harry Potter LEGO Set to help the kids through the intricate process of constructing and the Hogwarts Castle.

Fans of Harry Potter will love the adventures that you can have with the LEGOS Harry Potter Hogwarts Castle. You can create your own adventures or re-create the actions form the hit movies.

There is also a more expensive version of the same set that is priced around the $500 mark. It features some pretty elaborate features that you will not find in the standard set. Possibly the most interesting additional feature is the mechanical clock tower. The pendulum actually moves with the moving of the gate. There are also trap doors and moving staircases, among other things which bring an added dimension to the Harry Potter LEGO Set.

If your kid is a Harry Potter fan, then they are sure to find the LEGOS Harry Potter Hogwarts Castle fascinating as it depicts a world that they can escape into and try out their own skills of wizardry! 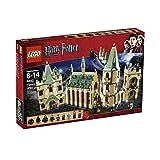 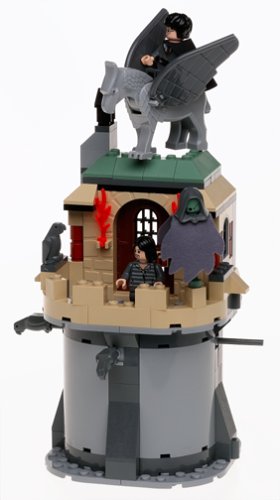