Horseshoe and Quoit Pitching are two similar games in which either horseshoes or quoits are thrown for accuracy at two stakes driven into the ground. Both games may be played by two players (singles) or four players (doubles). In singles both players stand at one stake and pitch two horseshoes or quoits apiece at the other stake. They then walk to the end where the shoes lie, count the score, and resume the game by pitching toward the stake from which they started. In doubles two opponents stand at each stake and pitch from there throughout the game. A simple underhand throwing style is used. Scoring is the same for singles and doubles. 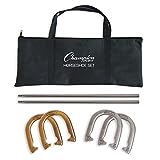 A quoit is an iron ring about 5 inches in diameter and between 3 and 5 pounds in weight. It is generally flat on one side and rounded on the other. Rules and scoring vary, since there is no recognized governing body. The stakes, called hobs, extend only 1 or 2 inches above the ground and are placed 20 to 30 feet apart. A ringer, or a quoit that encircles the hob, generally counts 2 points; one that leans against it, 1 point. One point is also scored by a player whose quoit is nearer the hob than his opponent's. The recent introduction of hard rubber or heavy rope quoits has made for a safer, easier game, often played indoors.

Although actual horseshoes were originally used, and still are, those in general use today are made of forged steel and specially designed for the game. The stakes are made of iron or steel, 1 inch in diameter, and extend 12 inches above the ground, with a 3-inch inclination toward each other. The distance between the bases of the stakes is 40 feet for men; 30, for women. A ringer scores 3 points. A ringer is denned as a shoe that encircles the stake far enough so that a straightedge placed against both ends of the shoe does not touch the stake. A player who has one shoe closer to the stake than either shoe of his opponent scores 1 point; if he has two shoes closer, 2 points. If two opponents pitch an equal number of ringers in the same round, neither scores. Official regulations do not allow a score for any shoe more than 6 inches from the stake, but in informal games the rule is often ignored. Games are usually played for a total of 21 or 50 points. The governing body for the sport in the United States is the National Horseshoe Pitchers Association.