Jim Shore's Collectible The Muppets and Kermit The Frog Figurines

If You Love The Muppets and Kermit The Frog, You Will Love These Jim Shore Figurines

Jim Henson started creating The Muppets as long ago as 1954 and our favourite little green dude, Kermit The Frog, was 'born' in 1955. More than fifty years later, his creations continue to be extremely popular. So popular in fact that they inspired Jim Shore to create these wonderful Muppet figures for Disney Traditions.

Jim Shore is a very popular artist who has worked with the Disney Company since 2005. The Muppets are one of his very popular series. Shore has been reported to have said that he is "extremely proud of his association with Disney.

"You can find Jim Shore's Muppet creations at retail outlets around the world as well as right here on this page.Let me introduce you to Jim Shore's version of your favourite Muppet characters including Kermit the Frog, Miss Piggy, Animal, Fozzie and the critics, Waldorf and Statler.

Kermit the Frog is one froggy dude that needs no introduction. Here he is hand crafted and hand painted as designed by artist Jim Shore, sitting on a log, playing his banjo and singing. 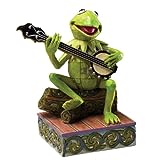 Miss Piggy's first appearance was on the Herb Albert television show in 1974. However, it was on The Muppet Show that she started off as a minor character and went on to become one of the most important characters. She's one strong minded pig, who was always determined to be a star. I think she made it although she has yet to receive a star on the walk of fame.

Here she is as presented in all her diva glory by Jim Shore. She's dressed to the nines in a pink evening gown. Look out Kermit! 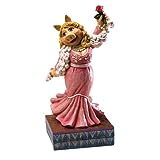 Fozzie Bear is a stand-up comic who is famous for his phrase "Wocka Wocka Wocka” and for the ability to wiggle his ears. He is the subject of much heckling, particularly from critics Statler and Waldorf and is often on the receiving end of a barrage of rotten tomatoes. He is very good-natured, however, and loves his friends dearly. 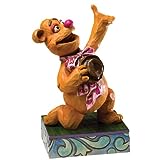 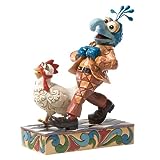 Here he is just a strutting down the street. Gonzo. Cute? I'm not sure that you could ever call Gonzo cute. However, I do think Jim Shore has done a nice job of capturing Gonzo and his plucky friend.

Jim Shore has captured the Muppets Animal character bursting out of his drum set as is normal for this popular character. As I wrote this, he is sold out on Amazon so I have included a link to eBay in the hopes that you might be able to find one through that venue if it is Animal you want to add to our collection.

Staler and Waldorf are two of the most disagreeable old goats (did I say that) that you will ever meet. Critical Curmudgeons, that's what they are. Like most of the characters on this page, they also rose to stardom through the television series The Muppet Show in which their main role was simply heckling the entire cast from the balcony. It is noteworthy that no matter how much they complained, they always came back and were allowed to make regular guest appearances in the show.

Jim Shore's The Muppet Show Display Stand - Or displayer as it is often called. 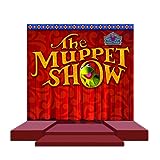 If you have managed to gather together the six figures in Jim Shore's Disney Traditions The Muppets set or you are currently building your set, you might wish to purchase this item. It's the Muppet Show stage displayer made by Enesco for the purpose of attractively displaying your collection.

This hand-painted displayer measures 12 inches in height by 10 inches in width and 21.25 inches in length.

Which Jim Shore Muppet Figurine is Your Favorite?

Which Jim Shore Muppet Figurine is Your Favorite? Honestly, I always have a hard time picking favorites in any category and I love all of Jim Shore's Muppet-themed pieces.

If I could only have one? I'm afraid it would have to be Kermit the Frog. He's my hero...at least until such a time as there is a Walter figurine available. He's just so cute and he's available, LOL!

Which Jim Shore Muppet Figurine is Your Favorite?

As I write this, the Animal and Waldorf & Statler figurines as shown above are very hard to find, with the later selling on Amazon for just under $350 and none available at all on eBay. If you are have picked one of these as your favorites or you need one of these to complete your set, you can quickly view ALL of the figurines that are available on Amazon, just click here. Good luck with your treasure hunt!

More of The Muppets