UNO is a super card game for family night or parties! It is inexpensive, readily available, and the rules are simple enough for even young children to join and play. But are you ready for Killer UNO? Killer UNO uses adds twists, traps, and speed play to the classic game to ratchet up the fun - using just the regular UNO card deck! 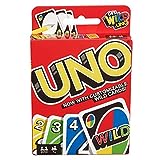 UNO: Disney Princess - Card Game
Uno with Disney princesses will be a hit at a girls' party!
Buy Now 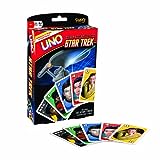 UNO is a great family game!

UNO must be played with a deck of UNO cards. For a game with more than 10 players, you may combine two decks.

1. Each player draw one card to choose the first dealer; highest number deals. Word cards count for zero. Play begins with the player to the left of the dealer.

2. Deal 7 cards to each player. Place the remaining cards in the middle for a draw pile, and turn the first card over to begin the discard pile.

3. The first player must match the discard either by color, number, or instruction. So if a green 4 is showing, the player may play any green card in her hand, or may play a 4 of any color. A wild card may be played at any time, and the one who plays it declares any color. If the player cannot play, she must draw a card. If that card cannot be played, play passes to the next player.

4. Play continues, with each player attempting to match the previously played card in color, word, or number; or following the instructions on the word cards. When the player is faced with an instruction to draw cards from the draw pile, that counts as his play and he may not play a discard for that hand.

5. When a player has only one card left, she must call "UNO!" If the player is caught not declaring UNO, she must draw two more cards from the draw pile. Play ends when one player plays her last card.

See below for the exciting

Ten or More Can Play!

Up to 10 players can play classic UNO or Killer UNO with one regular UNO card deck. For more people and more fun, just add a second deck and up to 20 can play at once!

Wizard Of Oz--Uno
Play UNO with some of your favorite friends from the land of Oz!
Buy Now 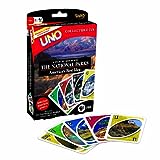 KILLER UNO is played with a regular deck of UNO cards and no special equipment. All of the above basic rules of UNO apply in Killer UNO. These added rules give the game a faster pace and several unexpected twists!

Passing Zero: When the zero card is played, play stops while all players pass their hand to the player next to them. If play is currently moving to the right, pass your hands to the right; if play is moving left, pass hands to the left.

Silent Two: When a two is played, everyone has to BE QUIET! The first player to speak must draw two. The silence is lifted when the next card is played (as long as it is not another two), so you would think this penalty wouldn't catch many people, but it does!

Multiples Play: When it is your turn, you may play multiple cards from your hand as long as the face matches. In other words, if someone plays a green five, and you have a green seven, you may play your green seven AND play as many other sevens as you hold in your hand. You can NOT play other green cards, but as long as the faces match your first played card, you can play them all. Since Killer Uno is a speed game, if you play them one at a time, someone could interrupt you playing another card - either the person who is next in line to play, or with one a legal interruption move.

Interruption Play: If a card is played and you have the EXACT match in your hand - exact color, exact face - you may quickly play your card on top of the matching card. If Player Two plays a yellow four, and you are Player Five and you have a yellow four, you can quickly lay down your yellow four before Player Three takes his turn (or before Player Two completes a multiple-card move as described above). If you make your play, then players Three and Four are skipped and play continues in the direction it was going before.

Draw Until Play: A player who has no playable card must draw from the draw pile, and continue until a card that can be played is drawn.

Car-Go UNO - Take UNO along in the car!

UNO: Car-Go Fun - Card Game
Now you can take UNO wherever your car go! Shaped like a thermos, the UNO CAR-GO container fits into most cup holders. It separates into a 2 piece card tray, one side for drawing and the other for discarding. The round UNO cards have holes in the center so the cards fit over the center tube to stay neatly in place. The game plays just like the classic UNO card game, only this time you can play it on the road! It's completely self-contained, portable, pop-open fun! Comes with UNO CAR-GO Container, 108 Round UNO Cards, and game instructions.
Buy Now

This rule is the same in both

Specialty Variations on Classic UNO - UNO has many fun variations that require more than a classic Uno deck. 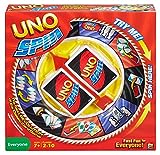 UNO: Spin
Ready to give UNO a spin' The UNO classic card game goes revolutionary! When a spin card is played, someone must spin the wheel. Will luck be on your side' Will players get to discard cards, be forced to pick up more cards, or even exchange hands' In a single turn, everything can change; players can come from behind and suddenly take the lead. It's fast-paced fun that'll make your head spin.
Buy Now

UNO: Flash Game
Clockwise? Counterclockwise? Nope; it's totally random! This exciting electronic version selects who's next, so you have to stay alert. Did you blink? Uh-oh, you missed your turn and time ran out. It's the fast, crazy game that will keep you guessing, on your toes and raring to go. And just when you think you can relax and take a breath, you still need to remember to yell UNO.
Buy Now

UNO Attack!
The object of the game is still to get rid of all your cards. The UNO command cards direct the game by telling players when to trade hands, discard, reverse the playing order, or skip a player. Beware the dreaded Hit command, though, as this translates into a game of Russian roulette. You never know when the card launcher is going to fire off a stream of UNO cards just for you! For 2 to 10 players.
Buy Now 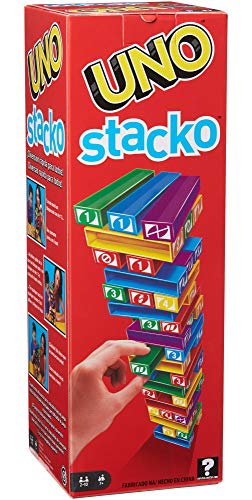 Mattel Games UNO StackoGame for Kids and Family with 45 Colored Stacking Blocks, Loading Tray and Instructions, Makes a Great Gift for 7 Year Olds and Up (43535)
Jenga meets UNO! UNO Stacko combines the skill of stacking with the fun of UNO. Pull out a block by color, number or command, then follow the command on the tile. It's great entertainment for the entire family! For two or more players.
Buy Now 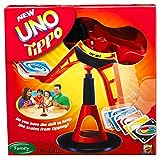 UNO: Tippo Game
Like the classic game of UNO - the object is to be the first to get rid of all your cards. But now UNO Tippo™ has two discard piles to match color and number. Discard carefully! If you tip the trays you'll have to draw 2 cards!
Buy Now

When a player plays her final card,

the game is over. The player who went out gets all the points remaining

in her opponents' hands.

* Face value for each number card

* 50 points for each Wild card

There are four colors:

Draw Two cards - two of each

Reverse cards - two of each

Skip cards - two of each

The farm animals have come out of their barn to play UNO! Round them up by matching colors or animals. Is there a blue pig on the barn roof? Match it with any blue animal or any color pig. You can also play a farmer, he's wild and matches anything! The first player to get all of their figures back in the barn wins! For 2 - 4 players, ages 3 and up.

UNO: MOO Preschool Game
We bought Uno Moo to play with our 3 year old. He loves the game and we love that we have finally found a game the entire family can play. He loves to Skunk people and make someone draw 2 balls. It's a great game and is helping him match colors and animals. He also likes to make the sound of the animal. As he grows older this game will be great to help him figure out strategy. ~ C.S.T. My three and a half year old loves this game. It will assist in teaching colors and animals if your child doesn't already know them. My son's favorite thing is skunking someone (playing the skunk figure) and making someone draw two. As he grows in the next couple of years, it will be a good game to work on stragety and logic. ~ Jack's Mom
Buy Now

UNO MOO for Preschoolers! - Even the youngest can play this fun UNO variation!

What do UNO? - Will you try Killer UNO?