Is you kid crazy about LEGOS? Then the LEGO City series will make it jump for joy. The set gives your son or daughter the opportunity to create a miniature city in the middle of your living room (or play room if you keep your living room toy free). It contains all the elements of a real city; police and fire station, garbarge truck and more.

If you've ever played with LEGO toys yourself, you know that the flexibility in building something to your liking, and not just the picture on the box, and the huge amount of accessories are what make it so much fun. You can get started with just one set and add several other sets later on to make the city bigger.

With all the vehicles and buildings you can create with LEGO city you can simulate real life to the smallest details. Your imagination is the limit really.

Even in make believe cities, safety is vital, which makes the LEGO police station a must have. Catch bad guys and fight crime with this easy to build building.

Besides the building, the set also contains four police officers and two robbers. The police station contains two jail cells where the officers can confine the robbers they caught. The officers can depend on a loyal K-9 unit to sniff out the danger. The dog has his very own kennel in the station where he can rest when he's not out tracking bad guys.

Police officers wouldn't be able to do their work efficiently without a fully equipped command center with computers. The accessories add to the realism, with a crowbar, mug shot area, wanted posters and even handcuffs. Evidence can be kept in the dedicated evidence room. And don't forget to look for the secret compartment.

No station would be complete without a garage to park the police cars and a helipad on the roof for quick interventions with a police helicopter.

Also included are a police van and car, and a bicycle to help your police squad catch the criminals. In short, everything is included in this set to turn any LEGO City in to a law abiding and safe place.

It's a great starter set that will provide countless hours of imaginative play time. After building this set, you can add other sets as you please. 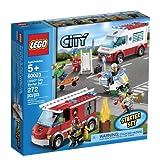 Getting a bird's-eye view has proven to be very successful in catching criminals in real life. Adding a LEGO City Police Helicopter will enable your kid to not just patrol the city from the road but also the sky. Helicopters don't fly themselves, so a pilot is included for a safe flight.

The rotating helicopter blades add to the realism, along with other typical accessories i.e. a camera and tools. With no less than 94 pieces included in this set, you kid will spend plenty of time building and playing.

This LEGO City set has been awarded an almost five star rating by buyers. Apparently the instructions are very easy to follow and most kids don't need help from an adult to put everything together.

Are you just as crazy about LEGO as your kids? You're not alone, a lot of adults have fond memories of playing with these building blocks.

And I'm sure you've seen some of the amazingly realistic things adults have built.