Brick Bank is the latest building of modular LEGO series. This model, like many other similar Creator modular buildings, is an advanced set for adults and older youth and might be a little difficult or boring for little kids. Recommended age for this set is 16 years and older, though younger LEGO enthusiasts with enough patience and attention to detail, can also enjoy building this model. Every Creator Expert set contains at least 2000 pieces and this one at 2380 pieces will also take some time until it's finished.

Brick Bank is the fourth corner model in the whole series! Corner buildings aren't great to see from the sides: walls are supposed to be hidden by the other buildings. Rotate the building and you will see you've actually got not only the bank but the second smaller building over the right side which features the laundromat down on the bottom and the manager's office upstairs. This model isn't as colorful as many of the other ones from Creator Expert series, but like any other new modular building, it tries some new different techniques for decorations and brings lots of usable accessories and printed pieces! Brick Bank is a fun model to play with and it will integrate well with other modular buildings!

On the outside, you see some interesting details: a brick built tree, double-sided classic clock, and bench. Windows on both the laundromat and the bank have the printed elements! The building itself also has something interesting to show: nice brickwork all around the facade, ice cream cones on the front and new send-green arch window pieces. When you come into a lobby on the first floor, the counter lady is ready to help you. They are behind security glass, so everything looks realistic. Here you will also find a transaction counter with hidden alarm buttons. On the opposite side of the lobby, there's the staircase that starts out with a half spiral and comes up to the second floor. You can also rotate the back of it so there's more space. Further, there's a big vault with safe deposit boxes and a large round door. It has a lock, so you can't get in unless you turn it the right way. Between the laundromat and the safe you see the air vent and if you calm down through it, you can access the vault and take all the money. On the back side, you can access the laundromat where strange things happen: people are putting money and valuables inside the washing machines and those things they put inside show up in the special bottom vault! When you come up to the second floor, the secretary meets you. He sits behind the desk with a nice typewriter. If you build your own LEGO City making streets of the Creator modular buildings, you may see they represent the style of 1930-50s. So there are no computers. What is interesting into the bank manager's office? There are some nice details: the office has a portrait of his father's father that started the bank, a classic big lamp, and a big statue. Also, in the cabinet, there's a full-length window which allows the manager to see what's going on downstairs (on the second floor is the large open area). And on this floor, there's a stairway going up to the roof. The roof doesn't have many details to show: here's only a skylight on the top that takes up your attention. Below is a nice chandelier which has lots of nice crystal gemstones strong enough to not worry about it breaking. 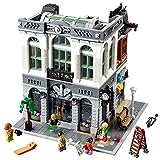 LEGO Creator Expert Brick Bank 10251 Construction Set
Brick Bank is a great choice for you if you love interesting details, fun features for play or it can also be used as a family activity, or as a present for another Lego enthusiast! This set is intended for older youth and adults, for more advanced builders, though it still can be a fantastic choice for kids with developed motor skills and patience.
Buy Now

Brick Bank is a corner building and will look even more interesting when attached to other buildings. You can collect and build an entire town with the LEGO Modular buildings collection: