Palace Cinema is the eighth of the eleven Lego's modular buildings. Unlike many products of other Lego's series, these modular building sets are interesting to build not only for children but for adults. You won't be able to find a modular building set with less than 2000 pieces and in the box of this one, you will find 2196 total pieces. The suggested age for this set is 16 and older.

Palace Cinema resembles us the Hollywood of the 1930's. It's a corner building this time: this way designers could add some more scenario on the streets. And though two-story cinema features lots of interesting details, has an incredibly detailed interior and is gorgeous from the outside, it's not quite interesting to look at from the back side since it's the corner unit, so everything from the back and from both sides is intended to be bounded up against other buildings. With Lego Creator collection you can build an entire town the streets of which resemble the 1930's!

The Palace Cinema design is inspired by Grauman's Chinese Theatre in Hollywood, California. And as it has been already mentioned, the cinema itself resembles the Hollywood of the 1930's. Look at the traditional three-sided sign that showing you exactly what's playing right now. Everything is surrounded by lots of lights. And then, as you go up, you see an iconic cinema sign, so there's no doubt there's the cinema building. "Palace Cinema" was used a lot for many theaters at that time. Beneath the sign is the set of doors with long, tall yellow handles that grab your attention right away. Down below on the ground is actually the unique star print (not stickers), which creates a line of stars along the sidewalk.

Coming around the corner you see the ticket area. On the outside, there's a lamp-post and a couple of searchlights which you can point up at the sky and in such a way attract attention to the event. On the other side of the cinema, the three posters for upcoming movies are displayed. They are covering the windows and actually aren't prints but stickers on top of the glass pieces. You can see the advertisement inside and outside the cinema. Movie boards have great Lego-based names on them: "The Brick Separator" and "Forever Sorting". And to LEGOlize the posters even more, the names of designers were added to them. On the second floor, we see upper-arch shaped older styled windows. Up above, there's the roof with couple different colored tile roofing. This set comes with 6 mini figures: a child actress arriving at the premiere night in the classic black limousine, chauffeur, female and male guests, photographer and cinema worker.

Come into an incredibly detailed lobby with a concession stand and ticket area. There's a red carpet, which is a new unique color for the baseplate. Here you can buy tickets and also buy yourself drinks, popcorn for the upcoming show. And when you've got some snacks, you walk up the grand staircase that leads into a large-screen theater, which is on the second floor. On the second floor is one more stairway which leads to the roof.

So the second floor is the auditorium. There's an old style film projector showing the movie of the evening. Here are the reclining chairs for 6 minifigures and an actual movie screen with a curtain pulled back. We can see a screen shot from the movie with a grainy image. 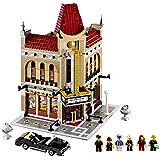 LEGO Creator 10232 Palace Cinema
Palace Cinema is an excellent set for you if you enjoy building lego creations or the best choice for a present if the person you're shopping for is also passionate about building realistic things! This set, as any other of this collection, is intended for more advanced builders, though it still can be a perfect choice for a kid with developed motor skills and patience.
Buy Now

Palace Cinema is a corner building and will look even more interesting when attached to other buildings. You can collect and build an entire town with the LEGO Modular buildings collection: