Town Hall is the seventh of the eleven Lego's modular building sets. The first set was introduced in 2007 and became the first product that was intended not only for children but for more advanced builders. You can join buildings together to form a large neighborhood layout! Connect several buildings together and form the streets that resemble a 30's style design.

Every set of this collection contains at least 2000 pieces, so the suggested age is 14-16 or older. In the extremely large box of this one you can find 2,732 total pieces and many interior details, such as a working elevator, wall paintings, desks, chairs, sculptures, plants. Town Hall is really large. This is the tallest, the largest Modular Building released so far! Of course, it takes some time to build and probably you will spend at least 10 hours before it's completed. But if you enjoy building the sets, then you will love this one! When finished, Town Hall draws attention when someone comes over for the first time, and when compared to other modular buildings, this one is the greatest.

The Town Hall is the most impressive in its size with three floors and a roof. It's a strict building, the most iconic elements of town halls are captured. In many of the municipal buildings you see dark orange and white as the main colors on the outside, and this building is colored in the same colors. Outside the first floor, on either side of the sidewalk are potted plants and a street-lamp. The facade of the building is as tall as the first floor and its upper part is supported by four large columns mounted on the stairs that lead up to the building. The shield on the front of the building has been designed especially for this set. Though it resembles the one of Billund, where LEGO comes from, their own pattern was used and designed in an old style. On top of that, there's the balcony where you can greet the people. Further up there's the year 1891, that defines when the building was built, but also the year the founder of The LEGO Group was born. And the coincidence is, when reading backward, it is also the year of birth of the designer, Astrid. Further up you see the clock tower. This set is the second to include a bell tower and has a print made specifically for this model. The nice thing about it is that you can actually turn the clock and set the time you want. On the roof, there's a large skylight that lets you see inside. Next to it is a hatch that is used to access the elevator shaft and a ladder which can be used to clean the bell.

On the back, there's the second entrance to the building and some tall windows adding a lot of light inside. At first sight, you may wonder what a gap in the wall is for. The opening is for an elevator to slide up and down. You can fix the elevator on each floor and when you take the building apart, the elevator comes with it. Behind the tall dark green double-doors is a hallway, tiled in black and white, from where you can visit the tax office and walk through the auditorium. At the end of the auditorium is a podium with the stairs leading up to it from both sides. Around the podium, in front of the walls on every side, is a long black bench. You can continue through the hall and through the elevator to reach the second and third floors.

The second floor has the mayor's office with a reception area. The mayor's office is pretty comfortable room and is furnished with a desk, a chair, wall paintings, lamps and a balcony. Also, there's a wide-open view of the auditorium in the hall, so anyone who is in the mayor's office can overlook what's going on downstairs.

The third floor is a spacious conference room. In the center is a long green table, surrounded on both left and right sides are plenty of seats, with one larger chair at its head. In the right corner of the room, is a globe of the Earth. From the third floor, you still can overlook the auditorium downstairs.

This set has the largest amount of minifigures in the whole series! In the box, you will find 8 minifigures: a bride, a groom, a janitor, the mayor, a news woman, a secretary, a female child, and a male child. 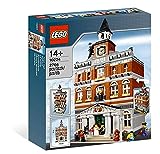 LEGO Creator 10224 Town Hall (Discontinued by manufacturer)
Town Hall is a fantastic choice for you if you really love building lego creations or a great present for another person you are shopping for! For young kids, it may be a little bit too difficult to deal with, but as a family activity, or for older kids with developed motor skills and patience, this is a great set.
Buy Now

The finished product is handsome and you will have even more use for it if you have your Lego city! You can collect and build an entire town with the LEGO Modular buildings collection: