We're very excited about the new range of Lego Dino sets for 2012. It's about time we had some new dinosaur Lego sets.

I have a five year old son and two of his great interests in life are dinosaurs and Lego. The Lego Dino sets are for kids age 5-12, so this is just perfect!

The Lego Dino sets were first available in early 2012.

Will there be any new LEGO Dino sets for 2013? No, it doesn't look like it. What's more, therthe LEGO Dino theme has been discontinued for 2013. So you probably want to think about buying any LEGO Dino sets that you want as soon as possible. LEGO Sets can get very expensive once they are discontinued.

It might be a while before we get more LEGO dinosaur sets and dinosaurs are hugely popular with lots of kids. 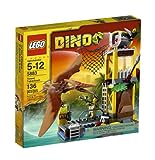 Fans will enjoy the LEGO Dino Game - a fun chase featuring the dinosaurs and characters from the range.

LEGO Dino Raptor Chase 5884
The Lego Dino Raptor Chase set features a raptor dinosaur. You also get 2 hero MiniFigures and their off-roader vehicle with big wheels and a lasso for catching that raptor. Lots of accessories too.
Buy Now

Future LEGO Dinosaur Theme - What would you like to see?

The LEGO Dino theme was based around the Dino Team needing to save humans from rampaging escaped dinosaurs.

A previous Dino Attack theme was much more conflict based.

What would you like to see in a future LEGO Dinosaurs theme?

LEGO Dino Defense HQ 5887
The Lego Dino Defense HQ (5887) set is a large set that includes 3 dinosaurs: T-Rex, Coelophysis and Raptor. There's a big dinosaur headquarters compound to build with bars to keep the dinosaurs in or out. The Dino Defense HQ has opening gates, a moving crane with a net, a communications centre, a laboratory, a helicopter landing pad and 3 flick missiles. You also get a helicopter and a land vehicle and 4 action figures.
Buy Now

The LEGO Dino range was discontinued at the end of 2012 after just one year in production. Dinosaurs remain a popular theme with younger LEGO fans so these sets have become collectible.

You can usually find the sets on eBay. New unopened sets are likely to be quite expensive, but you can also find used sets. Buying a collection can be good value sometimes.

Outdoor Dinosaur Toys
Looking for dinosaur toys for your dino fan to play with outdoors? We've got a big collection of dinosaur sand and water play toys. Paleontologist or dino hu...

Lego Dino - Dinosaur Lego Sets 2012
We're very excited about the new range of Lego Dino sets for 2012. It's about time we had some new dinosaur Lego sets. I have a five year old son and two of...

Best Dinosaur Toys by Age
Looking for the best dinosaur toys for this year? We've organized our recommendations by age. Dinosaurs are brilliant for sparking the imagination and scient...

Dinosaurs for Kids - Toy figures and more. Raah!
Looking for dinosaur toys for kids? We've got lots of dinosaur figures, all the common ones like T Rex, Triceratops and Stegosaurus and less well known ones ...