Lego - Famous Structures from Around the World

What do the Eiffel Tower, Taj Mahal, Statue of Liberty, Tower Bridge, Big Ben and Sydney Opera House all have in common?

They have all been immortalized in large Lego sets!

Ranging in size from 2,882 pieces to 5,992 pieces, these are some of Lego's largest sets ever created. In fact, the Taj Mahal set is the largest Lego set ever produced for sale! However, even though these sets are large in size, they also contain exquisite details.

Unfortunately, the Statue of Liberty, Eiffel Tower, and Taj Mahal have all been retired and are very hard to find (and also quite expensive), but the Tower Bridge, Big Ben and Sydney Opera House are still available at regular retail prices. Hopefully, you will one day have the chance to build one or more of these famous Lego structures, but if not you can still enjoy the pictures here and don't forget to vote on YOUR favorite set at the bottom!

Sets are listed in order of release...

This Lego statue is also fun to build as each "section" is unique - no two parts are duplicated on this build. Definitely, a great show piece to display when finished! This was the first large (1,000+ piece) Lego set I ever built and it was one of the most fun things I have ever done!

Erected in 1889 in Paris, France, the Eiffel Tower is the most visited paid monument in the entire world! The Lego rendition of the Eiffel Tower contains great detail including a small French flag at the top!

While this Lego tower does repeat most of the steps four times for the symmetrical four corners, it is still a lot of fun and is a great build to complete with a group of friends! (This large set has also been used in fun and competitive team speed competitions at Lego events around the world.)

Built in the mid-1600's by an Indian Emperor for his third wife, the Taj Mahal's construction lasted approximately 20 years and employed the help of hundreds of artists and craftsmen. The Lego Taj Mahal beautifully expresses the mastery of this exquisite work.

This is not only the largest of the architectural builds but the largest Lego set ever released to the public! This is a challenging build yet very rewarding too. Several of the parts are repeated throughout, such as the arches, minarets, etc. but the final product is fabulous!

Completed in 1894, the Tower Bridge spans the Thames River and is one of London's most popular tourist attractions. The Lego edition comes complete with several vehicles including an English taxi and double-decker bus!

This Lego bridge with its moving drawbridges is fantastic! As you pretty much build everything twice for the two towers, it is a great project to complete with a partner. Just make sure you have a long enough space to display this great piece!

Finished in 1973, the Sydney Opera House is one of the world's most recognizable buildings, hosting over 1,500 performances annually. The Lego Sydney Opera House model is the newest in the line of large famous structures and promises to be a hot commodity.

Perhaps the most challenging Lego build of all the large architectural sets due to its curved design, this project nevertheless has some really fun window and roof elements! The details are stunning and the end design is striking!

Completed in 1859, the iconic clock tower, known as Big Ben or the Elizabeth Tower, is one of the most recognized structures in all of England. The tower is located on the north end of the Palace of Westminster along the Thames River. Technically, it is the large bell inside of the tower that was originally called Big Ben, but today that name is often lovingly used to refer to the entire structure.

Technically, it is the large bell inside of the tower that was originally called Big Ben, but today that name is often generally used to refer to the entire structure. The intricate detail employed by the Lego designers make this magnificent set a pleasure to build! The small Lego Big Ben from the Architecture series has been one of Lego's best sellers in that line and this large one will likely be a best seller in the large structures line too!

A Fun Artistic Video of the Lego Eiffel Tower Build!

Own a Piece of History... 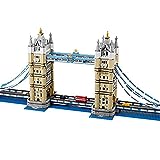 LEGO Tower Bridge 10214
With Lego you can own your very own piece of history whether it be a world-renowned suspension bridge like the Tower Bridge (shown here) or any of the other great architectural structures featured above. Have fun viewing these great works of art!
Buy Now

Which is YOUR favorite large Lego famous structure?

Which famouse structure would you want released next?

Personally, I am hoping Lego adds a Colosseum to the line although I think any iconic building looks great in Lego :) I just think the round structure of the Colosseum would be fun to build with all of those arches and I know a lot of little boys would love staging "battles" once it was complete. Lego sure does open up options for the imagination!

Informative content is courtesy of my own 20+ years of Lego experience. Historical details and other specific facts were researched from Lego books, websites, etc. Some photos are from my own collection while others were acquired from Amazon (via our affiliate status which gives us free access to these) as well as public domain images from other sources and Lego friends from around the globe. Any Lego "artwork" created by individual builders is specifically labeled as such.