Mad Libs: My Favorite Game for on the Road or an Evening at Home

We'd go to Florida every year to visit my grandparents, but my mom was afraid to fly. So we'd drive those 2,000 miles from New England and then back again, which was a LOT of time to pass, especially for a kid. (And for my dad, who did all the driving.)

So, my parents would help keep me occupied (and my dad awake) by playing games. We'd play the license plate game, 20 Questions, I Spy, logic problems ... all kinds of interactive fun we could have with me in the backseat and my parents up front. And my favorite game of all while on the road was Mad Libs.

For those of you who've never heard of Mad Libs (is that even possible?), it's very simple: You've got a book full of short stories, and each story has blanks scattered throughout. Each blank line takes the place of word of a designated part of speech: a noun, plural noun, adjective, verb, or adverb.

One person has the Mad Libs book and pen or pencil in hand. That person tells the other participants -- which can be one or more people -- which types of words to come up with in turn and fills in the blanks. Those providing the words have no idea what the story is, so the words they choose are completely random and can be as silly as they'd like. (Yes, sometimes, depending on the company you keep, they can be kinda naughty too.)

When all blanks are filled in, either the writer or someone else (doesn't matter who) reads the story aloud. Of course, since the blanks were filled in with random words, the stories usually end up being pretty goofy and often really funny.

This simple word and story game was always a favorite of my family's when we were traveling, but those weren't the only times we played. We also busted out the Mad Libs on snow days, curled up in our PJs with hot cocoa to enjoy some silliness. Sometimes the game took the place of TV in the evenings.

Mad Libs are also great for....

You can also play the game by yourself online. Check out MadGlibs.com where you'll find 188 free Mad Libs games. Choose a story title that you like, fill in the parts of speech you're asked for, then click and read the story you've helped create.

So, Where Did the Name Come From Anyway?

The story of how this word game got its name is pretty cute. You see, the inventors, Leonard Stern and Roger Price, were having a tough time agreeing on a name for their creation and in fact didn't choose one for 5 years after coming up with this fun pastime.

What eventually solved their problem was a conversation they overhead while having a meal -- they were apparently eating eggs Benedict, if you must know -- in 1958 in a restaurant in New York. Actually, they were eavesdropping on an argument between an actor, who wanted to ad-lib an interview, and his agent, who insisted that ad-libbing would be "mad."

And there you go! Mad Libs was born.

Create Your Own Homemade Mad Libs

All it takes is paper, something to write with, and some creativity. Just pen a short story, leaving blank spaces for the ____ the players will provide. Decide what part of speech each blank should be and note that below. In this case (above), the blank would be a plural noun. But instead of the word "words," you might get "burps" or "puppies" or "gumballs" ... you never know.

And creating homemade Mad Libs is something kids can do, too. It makes learning fun!

Sometimes on those long road trips, we'd put away the pre-printed stories, and my mom and dad would give me a list of random words, each taking turns coming up with a variety of nouns, verbs, adjectives, and adverbs as I'd write them down. Sometimes, they'd have to help me with the spelling and even a definition now and then, as they'd mix in some words that made me go, "Huh?"

When my list of maybe 15 - 20 words was complete, it was my turn to create a short story around those words, working them in until I'd used them all. Then I'd read my creation aloud, giggling as I'd go until I finished to high praise from my front seat audience.

Then I'd give my mom a list of words -- Dad was driving, so he couldn't write of course -- and she would create a story, sometimes asking my dad, "Give me a sentence using the word ___," which she'd somehow fit into the story she was writing, which always turned out to be very silly and very creative.

In fact, I have to credit those reverse Mad Libs games with contributing to teaching me creative writing.

SO Many Mad Libs to Choose From!

These are just two more of hundreds of versions of this simple but simply fun word and story game that are available. After all, the publisher has been cranking them out for more than half a century and probably will continue to for many years to come.

More Best of Mad Libs: World's Greatest Word Game
Here are more than 125 selections from Mad Libs past, with a variety of fill-in-the-blank story themes to keep you occupied and laughing.
Buy Now 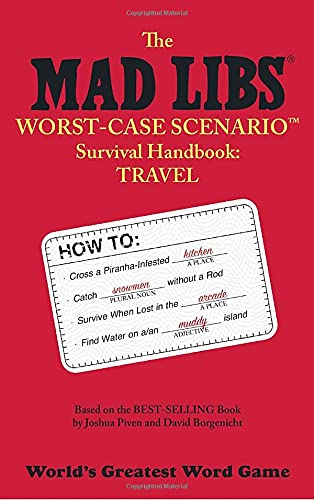 The Mad Libs Worst-Case Scenario Survival Handbook: Travel
Who knew that survival situations and disasters could be fun? Fill in the blanks to create stories of how to make it through all sorts of whacky emergencies.
Buy Now