Find all of your favorite Mega Man games all in one place, from the NES classics to games playable on Playstation, Wii, and XBox! Games like the Mega Man Anniversary Collection, Mega Man X Collection, and the Zero Collection are great catalogs of classic games in the series, while dozens more exist on other gaming platforms. Choose from the acclaimed ZX series, the DS Star Force games, Powered Up, Playstation games, and even old school NES cartridge games. Scroll on down for some suggested Mega Man merchandise, action figures, field guides, and more!

Capcom's Anniversary Collection compiles all of the classic NES games that you cherished as a kid (or maybe you've just been acquainted with them) like Mega Man 1, 2, 3, 4, 5, 6, 7, and 8. Game seven in the series was released on the SNES, with 8 being released on the Sega Saturn and Playstation. As a bonus, it includes two never before released Mega Man Arcade game, which you'll battle different robot masters in a Street Fighter style fighting game! These games are The Power Battle and The Power Fighters.

This is actually a pretty good deal if you're a fan of the series. Not only will you be able to play all 8 original games, but two new ones as well. 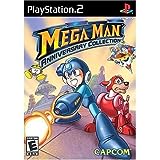 Mega Man Anniversary Collection - PlayStation 2
Also available as a GameCube game which is playable on the Wii. Includes TEN awesome games! The first SIX NES classic games are featured, in addition to two arcade games, the first two Sega Saturn games. One game is previously unreleased. Hours and hours of gameplay, this is worth every penny, and ultimately the best way to play all of the first games in the series.
Buy Now

Instead of continuing with the same old formula of games when the 16 bit SNES was released, Capcom decided to change it up a bit and release the X-series of Mega Man games. The first was released in 1993 to rave reviews. Along with the updated graphics and gameplay came a new cast of characters. Mega Man X, or simply known as X, was the leader of the Maverick Hunters. He, along with Zero, are on a mission to defeat Sigma, the leader of the Mavericks or rogue reploids.

In this adventure, the player has the choice to battle through eight bosses. Unlike its 8 bit predecessors, this game has a new host of characters as well as new gameplay mechanics like wall jumps and dashes.

Mega Man X7
Introduces Axl, who is a reploid in the X world that works alongside X and Zero. A very tough game to beat, and one of the last in the franchise to be created for some time.
Buy Now

Starting with X4, the series shifted from SNES to Playstation. These games proved to be good sellers for the most part, and added some brand new game play elements like 3D. X4 is regarded as one of the best of the series, though all of them are entertaining. Later in the series, character Axl is added into the mix as a playable Reploid.

X7 and X8 were met with favorable reviews. Both of these games are tough to beat, and only available on Playstation 2 (playable on PlayStation 3 as well).

In the majority of these games, the main villain is Sigma, known as the ultimate Reploid as nearly indestructible. In X8, it looks as though he may have met his demise, but we'll see if they ever pick the series back up again. X8 was released in 2004.

* All 4 Mega Man Zero games together on one cartridge and enhanced for play on the Nintendo DS or DSi.

* Utilize awesome weapons such as the Z-Saber, the Recoil Rod, the Shield Boomerang and the Buster Shot

* Collectable wallpapers, character cards and mod cards to unlock as you progress through the game

The Zero Collection: Four Games in One

Mega Man Zero Collection - Nintendo DS
All four games in one! Playable on the 3DS and all other DS incarnations.
Buy Now

Want to play the original game quickly without paying for it? You can play Mega Man on this site using your keypad! 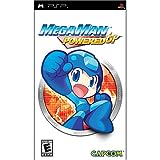 Powered Up - The Game

It had been some time before the original bosses from the original 1987 game were featured in their own game again, but they're back in Powered Up. Available on the PSP, this is an interesting anime take on the blue bomber that has been made with good reviews.

* Every level has been revitalized, producing vibrant environments

* All original background music and sound effects are remixed

Consider this a modern day, revamped version of the old school 1987 game with brand new graphics and higher quality, remixed music. It's the same bosses, but a brand new world of play with beautifully detailed graphics and environments! Also don't miss Mega Man Maverick Hunter X, a remake of the original Super NES 1993 X game, now on the PSP as well!

Which series do you prefer?

One of the most difficult bosses from MM4

Made by scientist Dr. Cossack, Pharaoh Man was reprogrammed by Dr. Wily (sounds like a familiar storyline, doesn't it?) to do his bidding against Mega Man. Originally, this robot was created to do pyramid research and discovery. He was equipped with technology to see well in the dark, and was very agile to avoid traps in the pyramids.

His weakness was the Bright Stopper, from Bright Man. This light can affect his vision making him much easier to defeat.

With over 100 video games to his name, Mega Man is one of the most recognizable icons of gaming. Mega Man: Official Complete Works showcases 20 years of artwork from this classic series and features character designs, box art, promo art, and loads of rarely seen art pieces. No Mega Man fan would dare miss out!

The ultimate handbook to the classic Mega Man universe. Inside you'll find profiles of every major Mega Man character, including all the Robot Masters from Mega Man 1-10, Mega Man and Bass, the Mega Man Game Boy series, plus important special characters like Proto Man, Rush, Roll, Duo, and more. Each profile features classic CAPCOM artwork, and includes bios, quotes, likes and dislikes, weapons, and, of course, each Robot Master's secret weakness! This 144 page guide is the perfect gift for CAPCOM fans!

This is hard to find, so your best is to find it on Ebay (see right).

"Promotional art, enemies, bosses, anniversary pictures, international covers, level sketches, you name it! I can't believe the the amount of pure art that's packed within these pages, all beautiful enough to look at again and again. One of the best parts of any art book, at least for me, are the comments from the original artists saying how they thought about a particular piece. You really get to see the passion put into what seems like 'standard' promotional art. Other things like a mini manga showing the origin of Mega Man and an interview with Keiji Inafune help round out an already great release. "

Part two of this book is the Mega Man X: Official Complete Works book, which features just the X series.

Dr. Wily's first ever robot that he created was Metal Man (remember in the first game that those six robots were reprogrammed by Wily, but made by Dr. Light). This robot is especially vulnerable to his own weapon. Once you defeat him, you'll be able to use the Metal Blade to do battle with him once again in Wily's Castle.

For the first battle, however, you'll need to defeat him using the Mega Buster or Quick Boomerang. The conveyor belt will randomly change that he stands on, and he will fire blades every few seconds. If you can stay on the opposite side of the room, he's a fairly easy win, making him a good choice for the boss to go after first.

Learn More About Everything in the Mega Man Universe - Official links you may want to check out...

When the first game was released in 1987, the sales levels actually didn't warrant a sequel. However, Capcom had pushed forward with a sequel with some leftover content and a little extra effort. More cartridge space allowed for more levels, better graphics, and better gameplay.

The hard work paid off, and the result was the massively successful Mega Man 2, released in 1988. This game features the most famous mini bosses of any game. In no particular order, they are Air Man, Wood Man, Crash Man, Flash Man, Quick Man, Heat Man, Bubble Man, and Metal Man.

To play this game today, you can play via:

There aren't a whole lot of Mega Man action figures out there today, but they are available in some capacity. Listed below are some of the collectible and new action figures available. Click through any product to read more about it! 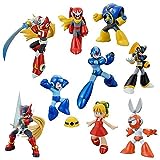 Thanks for stopping by! If you have a favorite game, a favorite character, or favorite mini boss from any of the games, tell us about it here! Make a recommendation on what you think is one of the better games, which ones people should steer clear of, or tell us which ones you think are "must owns" in the series.

What's Your Favorite Mega Man Game? - Tell us about your favorite game in the series, and why!