I have to admit I had no idea that Pillow Pets were now popular with teenagers. I learned this inside information when I had to go over to my sisters house and watch over my Niece's sixteenth birthday party, until my sister got home from work.

The kids were all going to gather at my niece's house and then head out for her birthday dinner. It was my job to make sure they didn't get into trouble while gathering and that they actually left the house. They all started showing up except for Kaitlyn, who is always late. They decided they would give my niece her presents while they waited.

When they started giving my niece her presents, they initially made sense to me. For instance she got a picture frame with a picture of her and all of her friends in it.

However when she opened the next one and it was a Pillow Pet, I was a little surprised. I knew my niece was taught to be gracious, so she would be kind and say thank you no matter what she was given. Her friends however aren't all that shy about teasing each other, so I thought well the kid who gave her this is about to get mocked.

But no, that is not what happened at all. They all started awwwwing and saying how cute it was. Then they started discussing which ones they had and which ones they wanted. At this point I was kind of perplexed and wondering if I had traveled back in time and this was actually her sixth birthday that I was watching over. Just then, the doorbell rang and Kaitlyn finally arrived, so they all left for dinner.

This gave me the chance to go check out the Silly Monkey Pillow Pet. It is cute and incredibly soft. The design itself is actually pretty smart. When it is folded up with the velcro strips connected, it looks like a regular stuffed animal. When you release the velcro strips and it opens up, it is a regular sized pillow that basically has a monkey as a pillow cover. Another smart decision in the design is that they have a piece of material that covers the rough velcro when it is opened up as a pillow so that you don't get scratched by it.

I had some time to reflect about why would these now be popular with teenagers. Part of it I think is teenagers these days were pushed to grow up fast and didn't necessarily get the chance to just be a kid the way that we did. We were seen as kids and wanted to be all grown up. They have had to deal with more and are trying to cling onto what little childhood that they had.

Perhaps it is no where near that deep. It could be as simple as it is cute and teenagers sleep a lot. So here is a cute gift that you can use to help you sleep.

From talking to my niece it is also something that you can take with you to use for the bus and car trips to the different sports events. It is a comfortable pillow for the ride and then folds up smaller, for easy storage in your back pack.

On Sunday we had the family birthday dinner for my niece. My mom also invited over my niece's best friend from grade school. Once again what does she get but a Pillow Pets pig, well actually it was a knock off. This time it was my mom oohing and awing over how cute it was and saying she wanted one.

Do these people understand that these were invented for small children? They were not invented for teenagers or grandmothers. Yet this is what my niece got for her 16th birthday and it is what I bought my mom for Mother's Day. Just don't tell her yet, as I haven't decided whether to give it to her, or keep it for myself.

After all the Silly Monkey would blend in perfectly with my brown couch and make for an interesting design choice. It is really soft and when it opens up it is a comfortable pillow. It is about the width of two adult heads. I wouldn't want to try to share it though, there isn't that much room on it. The stitching on it is well done and is therefore built to last. I haven't had to do it yet but they say they are machine washable.

Well now what am I going to get my mom for Mother's day? Maybe she'll like the elephant, they have always been her favorite....

All images Â© of whatsittoyou 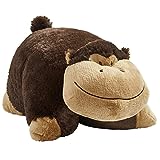 Pillow Pets My Silly Monkey - Large, Brown 18" Stuffed Animal Plush Toy
This is the Pillow pet that my niece was given for her birthday. It is a stuffed animal and a pillow all in one.
Buy Now