What Do You See in These Optical Illusions?

There are many great ambiguous optical illusions in which you can see two different things depending on how you look at them, or how your brain is wired. I have collected a number of such images, including famous optical illusions like the spinning silhouette or the Necker cubes. All of them can be interpreted in two different ways, so don't forget to vote for what you saw in the pictures after looking at them!

Which way is the woman spinning?

This famous animation is also known as a left brain / right brain test, which is supposed to tell you which hemisphere is dominant depending on what you see.

What do you see in the picture?

The classic figure-ground illusion as described by Danish psychologist E. Rubin. Most people can "switch" between the two perceptions with little effort, so vote for the thing that you saw first.

What animal is this?

My Wife and My Mother-in-Law (1888 German Postcard)

What do you see in the drawing above?

Hint: the chin of the young woman is the nose of the old lady. This is the first known incarnation of this popular ambiguous image.

The Photographer by Joaquim Alves Gaspar

Is the man walking away or towards the camera?

"All Is Vanity" by Charles Allan Gilbert

What do you see in the painting?

Tip: back away from the screen or zoom out to see the skull.

How many cubes do you see in the picture?

Hint: the light gray side can be both the right and the left one.

Which word did you see first?

What do you see here?

What did you see first?

Hint: the saxophone player is in black.

The Ultimate Book of Optical Illusions 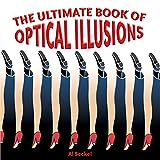 The Ultimate Book of Optical Illusions

If these few optical illusions aren't quite enough to satisfy your cravings, check out this publication by Al Seckel. The book contains optical illusions of all sorts, from the kind that seems to pulse, spin, or otherwise move on the page, to ambiguous pictures similar to the ones on this page. Furthermore, there are pictures like the Impossible Terrace, reminiscent of Sandro Del Prete's art, which couldn't exist in reality at a second glance. Whichever type you prefer, this stuff will confuse and delight your brain.