Who Is Plo Koon?

Jedi Master Plo Koon was a male Kel Dor from the planet Dorin who became a lifetime member of the Jedi High Council, from just before the Invasion of Naboo to the end of the Republic. In the Clone Wars, Plo Koon was a Jedi General in the Republic Army and he was also an expert starfighter pilot.

You can read the complete biography of Plo Koon on Wookiepedia.

Had you ever seen or heard of Jedi Master Plo Koon before?

The Plo Koon Lego mini figure is one of the coolest and most unique Jedis in the Star Wars Lego universe. The most remarkable thing about this mini figure is the specially designed head which is essential in bringing to life this Kel Dor Jedi; Lego have done a very good job of making this as accurate as possible.

The body of the Plo Koon Lego mini figure is printed appropriately to create the effect of the clothes that he wears and he is armed with a blue lightsaber.

The Plo Koon Lego mini figure is available on both Amazon.com and eBay.

Plo Koon (Clone Wars) - LEGO Star Wars
Add the Plo Koon Jedi Master mini figure to your or get yourself extra figures for your Jedi army by buying this Plo Koon separately. With his specially created head and breathing apparatus this is a very accurate model and one of the rarer Jedi Legos around.
Buy Now

Recreate Jedi Master Plo Koon's adventures leading armies in the Clone Wars against separatist forces. This Lego set has received numerous good customer reviews on Amazon.com and is suitable for all levels of Lego builders.

You can watch a video clip review of Plo Koon's Jedi Starfighter below.

Increase the size of your Republic army with this large piece of weaponry operated by two Clone Troopers and commanded by Jedi Master Plo Koon. This giant canon is fun to build and its level of playability is high with flick missiles and shooting canon.

As well as two cool Wolf Pack Clone Trooper mini figures there is a droideka to use as target practice. Additionally this set contains a new design of the Plo Koon mini figure - so far this is the only LEGO set that contains this version of this popular Jedi. 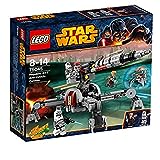 Jedi Masters Plo Koon and Obi Wan Kenobi dive into battle on this Republic gunship leading four Clone Troopers to attack the Sith apprentice Asajj Ventress. This 1034 piece model is a challenging one to assemble and comes armed with missiles and laser cannons.

Buy Your Own LEGO Star Wars Republic Gunship 7676 on Amazon.com

This Lego Star Wars set is out of production and out of stock in almost all stores making for a high price. You may be able to find a bargain on eBay though.

Hoth Lego Diorama - A superb, home-built Lego version of the Battle of Hoth.

Bossk Lego - Bossk Lego mini figure and the Lego sets he is included in.