Dolls for Children from India, Nepal, Pakistan... and Right Here!

To girls, dolls can be confidants. They can also be a reflection of a girl's current and future self. These days, thankfully, dolls come in all the shades that people do. Depending on their faith and traditions, they may wear saris or abayas. You can even find tiny henna-etched hands.

(Almost) whatever a child's features -- or culture or religion -- there is a doll that mirrors it. It is indeed possible to find dolls appropriate for little girls of South Asian descent: children from India, Pakistan, Afghanistan, Nepal.

It can be a bit more difficult to outfit these dolls and bring their world to life, but there are artisans creating fashions. I was intrigued to find doll clothes made in India and distributed (fair trade) by a company in the UK.

Let's explore the world with some charming little guides: dolls.

The German doll company, Gotz, makes two dolls that appear to have South Asian features. The South Asian baby doll here is Gotz Cosy Aquini Asia. She is designed for ages three and up and so comes close to being a "first doll". She is readily available in the U.S.

There is also a beautiful "big girl" play doll, Hannah, who was introduced in 2012. At almost twenty inches, Hannah is about midway between an American Girl and a Karito Kid in size. She's available on the UK site. She's a bit hard to come by in the states, though, I have seen her on eBay, but that's it.

A search of eBay may also yield a limited edition Gotz doll made for Pottery Barn. Prita has more than just the features. She also has the clothing for the part!

What a find! These fair trade doll clothes are from India. They represent fashions from several different lands. Some are designed for sixteen-inch multicultural dolls, others for fashion dolls.

Some of the same outfits are available for Barbie and her pals. Barbie also has a Ghagra Choli!

Indian Doll Fashions... for a Good Cause

The following is a blog post by a woman who has created her own Indian fashions for eighteen-inch play dolls like American Girl. There are quite a few fashions here -- they are simply stunning. You can find gagara-choli and kurta-salvar sets in rich fabrics and brocades.

The woman undertook the project to support Love and Grace Children's Home in India. She is now back from India. I don't know if she is currently making the clothing. You can contact her directly through the blog.

Nahji from India, Shola from Afghanistan

Nahji is the Indian doll from the Hearts for Hearts line. It's interesting to read the reviews. One reviewer note that she bought the doll for a friend of her daughter because she came from a similar background, and that the two preschoolers had been pretending to host Indian wedding celebrations. Another said that her nine-year-old granddaughter had wanted it because she had a friend from India.

In 2013, Hearts for Hearts brought a second doll from southern Asia into the line. Here is Shola, from Afghanistan, wearing a style of headdress that will be familiar to many American girls. She is lighter in complexion than Nahji.

At 14 inches, the Hearts for Hearts dolls are much smaller than American Girls. There is now a line of basic doll clothes for the Hearts for Hearts dolls. If you are looking for additional street clothes to fit little Nahji, the Les Cheries dolls are about an inch shorter and appear to me to have a similar build. You might want to take a look and see if you think they'll fit. 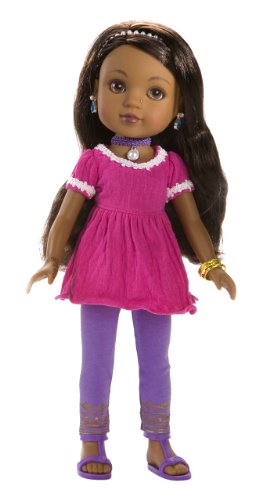 More About Hearts for Hearts

Hearts for Hearts is a wonderful company. They partner with World Vision, making a small monetary donation each time you purchase a doll. They company has also created an online space where girls can go to learn how to affect change in their world.

Girls can also go online and find out about Nahji's life. Her diary tells about on a tea plantation in Assam.

Sometimes the companies don't tell you the ethnicity -- they give you the skin color and hair color and leave it to you to guess! Adora's Jasmine has generally been regarded as Asian. The shape of her eyes, the general appearance, speak to me not of East Asia but of South Asia. She is from the Adora Friends line. You can also find her as a Girl Scout, from Daisy to Junior. 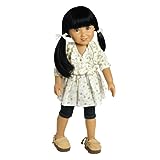 If you are having trouble finding a doll with the features and color you're looking for, you might go with a semi-custom doll. I call it that because it hasn't really been molded to look just like your child, but the artisan has a lot of different face molds and components that can be combined to get a pretty good likeness. Apple Valley makes doll kits that can end up looking strikingly like really babies and children -- including those who have less common features. They are made of play-safe vinyl, but are larger than dolls that are marketed as first dolls.

You will probably want to buy from a dealer, not directly from Apple Valley. That way, you can get more skin tones. My favorite is Brittany's Babies. The site does a good job of walking you through the process and seeing what options you have for a particular skin tone (and also what they will look like).

I am also featuring the clearance site of Just Mom and Me dolls. Here you will find some dolls that were created from kits. I see some that have features we might associate with South Asian countries.

Sonali Doll in a Sari

American Girl doll Sonali is at least part Indian -- her mother has Indian heritage. In this child-made video, she models a sari. The video is set to "What a Wonderful World".

Sonali is an eighteen-inch play doll from the Girl of the Year series. These dolls can be hard to come by once the year passes, but you can sometimes find one at a reasonable price on eBay.

Indian Barbie dolls are not hard to come by. There have been at least two lines of Barbie dolls marketed in India. Here we see Expressions of India and Barbie in India.

So often when the big name doll companies sell products in another nation, they sell generic white/ blonde dolls that aren't representative of the population. For most of the time that Barbie has been in India, though, there has been some effort to make her look Indian.

There's quite a variety of Indian Barbie dolls, in features and costuming as well as in price. In addition to dolls that were originally designed for an Indian audience, there are dolls that were included in the Doll of the World and Princess of the World lines. This doll, from the princesses collection, strikes me as more real than others who came before and after.

Barbie Princess of India Dolls of the World
Buy Now

Curious about those Barbies? Here is a photo essay of the Expressions of India line and some notes about the product's history.

Fulla - Barbie may be Hindu, but Fulla is Muslim

Many people associate India with the Hindu religion, but there are people of quite a few faiths. I taught the children of an Indian Muslim family several years back. I remember the aunties arriving at the house in a black abaya bearing gifts and the six-year-old's squeals of delight as she tore into a pink and purple package. It wasn't Fulla -- I think it might have been toy puppies -- but the packaging had a Barbie look to it. I think about that when I see Fulla, clad here in purple.

In some lines, she has floor length clothing and an abaya. In others, her skirt is knee length.

From Mixis.com (a company that specializes in mixed ethnicity fashion dolls) comes a lovely Bollywood outfit -- a modern take on the salwer kameez.

The dealer has got quite a few pictures and poses posted. It looks like that doll does ballet!