The Coolest Spy Gear for Kids

Get cool spy gear for kids. Check out spy kits, plus lots of spy gadgets, spy toys and outfits for dress-up play.

Kids can create their own spy missions or use these toys for backyard (or indoor) camp outs, to conduct surveillance, exchange secret messages, decipher codes, and gather evidence.

Playing spies also happens to be educational. Children build observation, analytic and deductive reasoning skills while completing missions and playing games. It can be just plain fun, too. Get some kids' spy gear today for your little double agent.

Many of these kids' spy gadgets have photo and video recording components for spying, as toys are integrating these technologies more and more. These toys stimulate the imagination and can beef up observation and analytic skills as kids gather evidence to complete missions. If your little one likes to play 007, give him some of these cool new spy toys.

If you get just ONE spy gadget, it should be THIS one.

Video Watch with Night Vision has lots of features and activities for spy play to keep kids busy, and is the ultimate intelligence gathering tool for little spies.

A real agent must be able to keep an eagle eye on a situation, even in the dark. He also needs stay in communication with his team while remaining undetected.

Evidence gathering is a piece of cake when you’re equipped with a spy cam, video camera and mic. This watch can record and play back full-color video and audio, and the camera can take up to 2000 photos of suspects or evidence that kids can upload to a computer.

For more secret agent action, the watch comes with some built-in spy apps (including the lie detector voice analyzer and voice changer) and games. Plus, you can connect the watch to the internet via USB to download more free apps, games, and 20 video missions from SpyNetHQ.com.

Once kids get the hang of using the multimedia features, this high-tech toy is sure to provide endless entertainment. Watch this video to see all the cool features:

Spy Surveillance Goggles use real infrared technology with an LCD display to help you see up to 50 feet away in total darkness.

You can switch between Night Vision and Daytime Surveillance (full color) mode, and even record videos and photos for the ultimate surveillance.

The Thermal Tech mode produces images with heat vision/thermal imaging, and the Ghost Recon mode produces a spooky, ghostly effect. Kids even have the option to record videos and take photos for later playback or uploading by adding a MicroSD card, so make sure to pick one up if you don’t already have an extra one around.

Great fun indoors and outdoors! For ages 8 and up.

Enter a world of intrigue and espionage as you experience the search for clues, the thrill of the chase, and the self-satisfaction of a completed mission.

Here are some of the top spy kits for kids, which include an assortment of cool gadgets and tools to gather intel, solve mysteries and complete missions.

Get all the essential tools with the Micro Spy Kit spy belt.

It's got a motion alarm that you can set to secure your perimeter or to see when your backpack, bedroom door, etc., has been disturbed to keep out those nosy little sisters or brothers. Use the ear light to remain undetected in the dark while you use the micro ear listener to gather information in stealth mode. Pass along secret messages using the invisible ink pen.

A spy pen is an essential gadget for spy communications. Use special paper for your little spies to write messages on with invisible ink. This UV ink can only be read with an LED black light. Even older kids will enjoy having this secret method of communicating.

Here's another spy kit that 's worn as a belt to keep your hands free. It kit comes with a motion alarm to secure the perimeter from intrusion, a pinch shooter that shoots discs up to 20 feet away -- in case your little agent has to defend himself, finger lazer light to help him see in the dark, and an invisible ink pen with UV light decoder for passing secret messages and keeping them from prying eyes.

Kids will love playing around with all the different gadgets. This one little toy packs hours of secret agent fun and doesn't cost a ton of money.

While spy gadgets tend to be focused on fieldwork and surveillance, Many spy kits focus on the scientific side of sleuthing -- using magnifying glasses to find physical evidence, locating and dusting for fingerprints, decoding secret messages, etc.

Many of these kits come complete with pre-made activities, like the Super Sleuth Kit. It comes with a flashlight, ink pad, fingerprint powder, code wheels, rear view spy glasses, magnifying glass, secret marker pens and a reader for secret messages.

So, what does one need to disguise his identity? An ensemble that makes him hard to ID. To go deep undercover, conduct incognito surveillance, he needs an outfit that helps him carry and hide all his gadgets, blend in, and keep his identity under wraps. You can go undercover for Halloween (or anytime) with a stealthy spy costume.

Get an outfit has all the things you need to disguise your identity. A suit is a always a good way to blend in, or you can wear the signature spy trench coat, of course. This one is black and double-breasted with a belt and buckle. You never know when you'll need to conceal your face, so this coat gives you plenty of material for that with its stand-up collar.

To be even more incognito, this secret agent costume comes with a matching fedora hat, dark sunglasses, and a fake handlebar mustache.

Spies in the Cold War era liked to wear trench coats because they could be easily rigged with secret pockets and compartments to hide their spy gadgets, and the coats blended right in with the style most men were wearing at the time. Today, we still think of spies as being dressed this way -- although there is a certain famous British double agent who prefers to wear tuxedos.

No double agent can complete a mission without his spy gear. Add your own accessories (toy gun, handcuffs, etc.) or any fun gear you have from your own collection.

This costume will get lots of use outside of Halloween, too. It's loads of fun for playing spies. The small fits children sizes 5-8, and the large fits sizes 8-12.

Why do spies have so many gadgets and gizmos? They have to be fast on their feet and keep their hands free, and they have to keep their gear hidden so as not to give themselves away.

This is one of those cool all-in-one spy gadgets kids can't get enough of.

Get the Spy Glove >>

The adjustable Spy Glove fits on either hand and includes a wristwatch, a digital recorder for taking verbal notes or recording conversations, a mini-telescope for viewing across long distances, a flashlight for stealth activity, and a magnifying glass to examine evidence once the mission is complete. 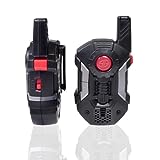 When you're out on a mission, nothing's more important than having a reliable way to communicate with each other.

These new and improved spy walkie talkies work over a long range (up to 2 miles). These can be great fun in the yard and around the house for secret spy missions. Keep in touch with your partner, call for backup when you need it.

Kids who are too young for (or just don't have) cell phones will love these. They'll get lots of use out of them for camping trips, playing games around the neighborhood, or just entertaining themselves around the house on a rainy day. If you didn't already know, you'll find that kids love the idea of being able to use technology and talk to their friends in secret.

Now here's a toy based on a real spy gadget. These may look like just another pair of sunglasses, but they're actually a high-tech gadget.

These stealthy spy glasses have a camera that can secretly record 20 minutes of video and take over 2,000 pictures of evidence and other intel for the ultimate surveillance.

Then, kids can upload the evidence to a computer for further examination, using the USB jack.

You just press the button on the side of the glasses to record or snap pictures. You can recharge the built-in battery by connecting via USB to a computer. (There's a USB connection, but a USB cable is not included.)

These would be a great gift to go with other spy gear or with a costume.

Are you spying, or just lookin' cool? No one will be the wiser when wearing these stealthy specs.

Rearview sunglasses (not pictured) are another cool way to go undercover. Not only will they keep your identity secret, but they'll show you what's going on behind you. If you're hot on someone's trail, use these glasses to keep track of your subject's every move.

Want to know more about the history of espionage? Want to know what gadgets REAL spies have used? If you're ever in Washington, D.C. take a trip to the International Spy Museum. You'll see special exhibitions and all kinds of creatively hidden cameras, recording devices, and secret weapons from the Cold War era and beyond. (I personally like the lipstick cameras).

They'll even let you complete a one-hour interactive mission as part of your visit called Operation Spy, which I can tell you is lots of fun for kids of all ages. For more information, for museum hours, and to purchase tickets, visit https://www.spymuseum.org/.

The CIA museum collection includes clothing, equipment, weapons, insignia and other memorabilia donated by CIA agents -- much of it custom built for the agency's use. Everything on display is declassified, of course.

What's at the museum? Here's some highlights from their collection: http://blog.fastcompany.com/post/92557664476/10-of-the-most-bond-worthy-spy-toys-in-the-cia.

Which best describes you?