Find Fossils In Your Backyard

Tennessee and so many other parts of the country are sitting atop mineral-rich geology and fossils that preserved eco-systems that existed millions and millions of years ago. Although the idea of vast swaths of our country covered by leagues of seawater is so dramatic and different from the terrain today, it's hard to imagine.

Like many people, I found the study of geology as a hobby or career incredibly boring (blame my geology teacher!) until I discovered there were a multitude of diverse fossils right in my back yard! Tennessee is full of fossils -- literally. The sunken basin that encompasses Nashville is particularly rich in fossils from the Ordovician Period, which date back roughly 450 million years.

In 2009, a 9-year old in Williamson County found an awesome Trilobite fossil that went extinct approximately 500 million years ago--before dinosaurs existed. Williamson County, Tennessee, was home to another ground-braking discovery (pun intended) in late 2010 when Mastodon bones and items that appear to be stone-age tools and axes were uncovered during construction-related digging in a suburban backyard.

A lady in Smyrna was using a 10-pound hunk of coral as a doorstop for 15 years before she noticed what it was. And in the summer of 2015, a kid in Alabama found a fossilized vertebra from an Elasmosaur, a water-dwelling reptile with a long dinosaur-like neck.

Nashville and much of Middle Tennessee is part of the geological region known as the central basin, which extends through the Alabama border. To the west and north, the basin is border by the highland rim, which represents an entirely different variety of fossils from the Devonian Period. In the east, there is a brief highland rim region, which preceded for areas formally designated as the Cumberland plateau. In Middle Tennessee, major geographic formations include:

The geographic formations are generally to distinguish by their distinct qualities. For example, near my home most of the fossil records are from the Ordovician Period, but across the across the street there is a strong elevation change and rocks that are completely different.

All About Tennessee Fossils

Fossil Identification Guide for the Tennessee Valley Part 1
This mesmerizing ebook includes approximately 500 photos and descriptions of fossils found in Tennessee. Part One includes all kinds of fossils ranging from the most common to ones that are extremely rare.
Buy Now

This bi-valve shells are among the most prevalent fossils in Tennessee. Although brachiopods are common, there are most than 5,000 types, including some that are very rare. When I started find brachiopods, I through they were clams. In face, I didn't even know what a brachiopod was. Like clams, mussels and scallops, Brachiopods are bivalves, so-called because they have two shells or valves. Brachiopod literally translates to arm-foot, which sounds a little strange, but defines its growth habit well. Unlike clams that over about on the ocean floor, brachiopods were supported by their own arm that would anchor them to the ground.

The Difference Between Brachiopods and Clams

If you were to draw a straight line across the shell, you will notice that the brachiopod is perfectly symmetric on both sides while the clams and mussels are always asymmetric.

Brachiopods come in all shapes and sizes. Most brachiopods are between 3/10th of an inch and 1 inch although they can grow four inches long. To show you how easy fossil collecting can be, all of these articulate and inarticulate Brachiopods were found right here in my backyard.

Gastropod include snails, shells with corkscrew spirals, slug and other animals that belong to the mollusk family. Gastropods are also called univalves because their shell is comprised of one molded piece. A lot of interesting things can happen to gastropod shells. Sponges, corals and reed-building organisms readily cover over gastropods turning them into unrecognizable specimens that make one ponder how they came to be.

Speaking of corals, sponges, and bryozoa, they are going to be one of my next topics along with trilobites, ammonites and other fossilized creatures.

DK Eyewitness Books: Fossil
Perfect for kids and adults, this handcover, photo-filled book from DK explains how fossils are created from all kinds of living materials and how ancient life forms were preserved over millions and millions of years.
Buy Now

Crinoids are living echinoderms related to anemones, urchins, sea cucumbers, starfish and other marine animals that have a plant-like form. Crinoids first appeared during the Ordovician period approximately 500 million years ago.

Although the majority of these creates are extinct, several hundred species exist today. These unique animals resemble palm trees with flexible stems and feathery fronds. Notoriously delicate and difficult to preserve, Crinoids are seldom found in tact. They are typically found in segments that resemble nuts, washers, and bolts complete with spiraling threads. Finding a complete crinoid is extremely rare. This high-quality pieces traditionally end up in museums while the rest of are us are content finding the occasion stem segment. Click on a push pin to get directions from your address and find out more about the fossil collecting site. You can find even more on fossil sites listed in this earth science pamphlet published by the state. 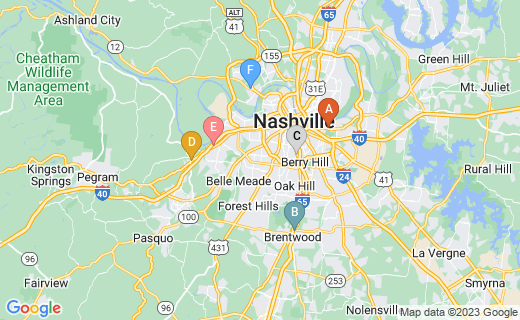 This building supply store across from the Mount Olive Cemetery is home to the remains of a massive volcano that divides two geological formations.

Tucked away at the edge of this parking lot is a massive rock face that exposes bryozoas and other goodies. This was a Shoney's but is now St. Thomas

Located at the corner of Inverness and 8th avenue, this rock cut in the Sonic parking lot is filled with layered fossil deposits.

This exposure near the Nashville Moose lodge on Charlotte Pike and Old Hickory features a large exposure where you can see fossil slabs.

Remember when they were just building this target? Well, they certainly ran into a few brachiopod fossils during the construction.

Located near the Northwest Family YMCA in the Bordeaux, this site behind the shopping center features a large variety of fossils.

Where and When to Look

Fossil hunting is a great activity for children and adults. One one hand, you can enjoy time outside, get your hand dirty and discover the thrill of fossil hunting, but on the other hand, you are dealing with nature, who has the unmistakable propensity of becoming mean in an instant. While fossil hunting it's important to be safety conscious, wear bug repellent, sunblock and watch where you step or put your hands. Rocks and be very unstable and spiders, snakes and all types of creatures love living in and around outcroppings. Here are some tips to ensure a successful fossil hunting trip and pinpoint the best places to look:

Rock cuts along highways and parking lots are a great place to look for fossils. These rock faces show many, many years of fossil records and distinct periods as well as anomalies.

Disturbed areas can hide a great deal of fossils. Quarries, man-made ponds and erosion-prone areas are ideal for fossil hunting. In these areas, it's easy to find fossils that are fully free from the matrix and any extraneous rock material.

After the rain, many ancient fossils are revealed for easy finding. Hunting after a rain event when terrain has sufficiently dried can yield tremendous results.

Handbooks: Fossils: The Clearest Recognition Guide Available (DK Smithsonian Handbook)
If you're interested in learning more about fossils, this book from the Smithsonian is the perfect solution!
Buy Now