The Best Wii Games For Kids

Reviews of the Best Games for Kids on the Wii

Finding the best Wii games for kids is often a chore. You have to sift through a bunch of duds to find the diamonds. Did you go home with something like "Cooking with Lame-O Sam" when your child wanted "Cooking Mama"? Don't feel discouraged. Help is available!

This lens is for parents who want to know about the best and greatest games. Your child is missing out if you think "Mario Brothers" and "Dora the Explorer" are all the Wii has to offer.

Those games are fun, but many more are available. Your child can play puzzle games, rhythm games and more. Popular kids games like "Where's Waldo" and "I Spy" are on the Wii too.

The Wii games below are grouped according to age-group. That makes it easier to find the best game for your child. Simply look at the games within a specific age group. Refer to this page often, and you'll never end up with another inappropriate game.

Check out the best Wii games for kids listed below. Your child will appreciate it!

Be sure to check out this other Wii Games For Children list too...

Finding a suitable Wii game for young children can be tricky, as many of them require some reading, but there are a few that specifically cater this age group. Many games just need a parent to set them up, and once they're ready to play, the child can play mostly without reading.

The Dora and Diego Wii games are particularly good for little kids, and encourage exploration and learning.

Wii Play with Wii Remote
This "game" has its critics in the adult world, but the mini-games are ideally simplistic for little guys & gals. This is listed so high simply because it's accessible to a younger age. Lower games on this list are more involved, but much more fun.
Buy Now

Go Diego Go Safari Rescue - Nintendo Wii
The Dora/Diego games are the best intro games for young beginners (3-4yo). Little children will be interested and capable of playing without much parental assistance. Boys like Dora just as much as Diego, but some 'macho' boys may prefer Diego over Dora.
Buy Now

Dora the Explorer: Dora Saves the Snow Princess - Nintendo Wii
Very accessible to the youngest children with no reading and very little adult assistance required. All Dora games on all consoles are very accessible to their target audience, though they do tend to be effectively repackaged variations on same game.
Buy Now

Carnival Games - Nintendo Wii
This is exactly what you'd expect from the title. It isn't deep, but it is easy and entertaining enough for early gamers to enjoy without the frustration that comes from games requiring more dexterity.
Buy Now 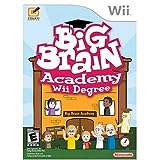 Big Brain Academy: Wii Degree
Highly Educational! My highest recommendation for young kids and great fun for all ages. Your children probably won't be able to handle all the mini-games right away, but you'll be surprised what they can do with a little instruction.
Buy Now

A lot of games are geared at older children, and teens, and a lot of the very young kids get left out. There is not much of a broad variety of games for very young children when you go looking for them in game stores, and you certainly don't want to give a 5 year old a game that features blood, gore, and adult themes, but here's a list of Nintendo Wii video games that are geared at the young kids!

Boom Blox - Nintendo Wii
Outstanding fun for the whole family! One of my top recommendations! Similar to Jenga, except you don't stack blocks, you knock them down or otherwise manipulate them. You will enjoy this just as much or more than the kids.
Buy Now

Mario Kart Wii with Wii Wheel
Later tracks will become way too challenging for young kids, but the intuitive steering-wheel control makes this Kart racer so much easier than all predecessors with traditional console controllers.
Buy Now

Mario has appeared in over 200 video games since he was created way back in 1981 and has taken on the role of Nintendo's mascot and has been a huge selling point together with lots of top selling merchandise. He is of course part of the hugely successful Nintendo Wii currently taking the world by storm.

Mario games really are the best Wii games for kids.

Super Mario Galaxy 2
Launch into a new universe of gravity warping worlds in the sequel to one of the greatest games of all time!
Buy Now

Super Smash Bros. Brawl
The third installment of the incredibly successful Super Smash Bros. series is now on the Wii, The roster is longer than ever, but that just means more butt to kick across over a dozen different, graphic-rich stages with original moves, new modified moves, and a brand-new super attack called Final Smash!
Buy Now

Cars - Nintendo Wii
My 4-year-old had trouble with the Gamecube version of this title, but did much better with the Wii control scheme. Mario Kart is a more enjoyable racer with more appeal to older gamers, but this one is worthwhile especially if you're fans of the film.
Buy Now

Mario Party 8
A family game. Kids love the Gameboard design of the game and the mini-games are a blast. Some will pose a challenge to them, but it's great fun to play with them so you can provide assistance, coaching, and encouragement where necessary.
Buy Now

WarioWare: Smooth Moves
Maneuvering through the world map & story mode may be too hard for younger ones, so you will have to play a bit on your own to open up a bunch of the mini-games, but then they'll have plenty of easy, quick options. No need for a long attention span or complex thinking - every mini-game makes it clear what you need to do with the Wiimote.
Buy Now

Endless Ocean: Dive, Discover, Dream
Young children (3yo) can use the Wii-mote to explore the serene & vibrant environment, but in order to advance the story-mode, it really requires more skill (~5+yo).
Buy Now

Disney Princess: Enchanted Journey - Nintendo Wii
I try not to gender steer my boys too much, but the princess-pretending and dress-up features were beyond my comfort level. You make the decision for yourself. Younger children will need more assistance.
Buy Now

The LEGO Wii Games are definitely some of the best Wii games for kids. Two people can play together through the story, which is very easy to pick up and play and there are cute Lego characters and funny moments. If you like LEGO or just want something you can play with a younger child, these are great.

LEGO Harry Potter: Years 1-4 - Nintendo Wii
This game is really fun for kids and adults. Lots to explore even after you finish the game.
Buy Now

Lego Star Wars: The Complete Saga - Nintendo Wii
This game involves fighting, so if you don't want the kids exposed to it then skip this one. But the game design is brilliant and you'll enjoy as much or more than they do. You can play cooperatively, too. The youngest can join you as a "force buddy" and just work the nunchuk when you're a jedi.
Buy Now

Lego Indiana Jones: The Original Adventures - Nintendo Wii
No way to lose. You always respawn at your previous location. Enjoyable for multiple gaming skill levels. You will enjoy helping your younger children with the challenging parts.
Buy Now

Lego Indiana Jones 2: The Adventure Continues - Nintendo Wii
Not quite as entertaining as the Lego games that have come before, but still accessible to children and fun for adults.
Buy Now

Lego Batman - Nintendo Wii
A little more repetitive, but also a little trickier, then the other Lego video games, but still very fun for everyone. This is a no-brainer if your family loves Lego, superheroes, or both.
Buy Now

When children get a bit older, they're able to read the on-screen instructions, and figure out the controls for a game without any parental help. Here are some games that are popular with kids of this age group, and are a lot of fun.

Zack & Wiki Quest for Barbaros’ Treasure - Nintendo Wii
Lots of Reading necessary. Entertaining game design! A ton of fun! You will need to play this with your little one (even 5-6yo) and take the controls at times, but it won't be a burden. This game is a blast to play together with your kids.
Buy Now

Mario & Sonic at the Olympic Games for wii
A fun single & multiplayer game. Younger children may be able to dabble with this, but to avoid frustration requires stronger gaming skills.
Buy Now

Super Paper Mario
Great practice for more complex platformers (eg, Mario Galaxy). Young ones will need help and guidance, but the game is so fun that you won't mind taking the controls for the tough parts. It switches from traditional 2D side-scrolling to full 3D.
Buy Now

Dora the Explorer: Journey to the Purple Planet - Gamecube
I know this is a GameCube game, but it's compatible with the Wii and I include it because it is the single best traditionally-controlled console game available for young ones (3-5yo). It only has two controls to worry about (movement & action), it's simple yet entertaining for little ones, and plays just like a Dora episode.
Buy Now

Big Brain Academy: Wii Degree
Big Brain Academy: Wii Degree does a great job at bringing gamers young and old together in a game that works well, and expanding the online gaming action that the Wii has just started seeing. It is definitely a must buy for anyone who loves a mental challenge that is different from action games that are more about looks than fun.
Buy Now

Pikmin, New Play Control - Nintendo Wii
A GameCube classic but updated for the Wii with motion controls. This is a strategy game with adorable Ant-like creatures that help you find the pieces to your ship while battling large bug-like monsters. Sounds weird, but even my mother loves this one.
Buy Now

Super Monkey Ball: Banana Blitz
If you want unique, addictive, yet simple gameplay, try this out. The goal is to get the ball to the end of the course, but there are lots of obstacles and it is pretty easy to fall off! Think of those games with marbles where you try to get them through a hole.
Buy Now 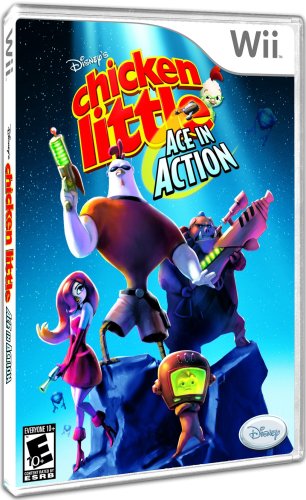 Disney's Chicken Little: Ace in Action - Nintendo Wii
My boys 6 and 7 love this game... They have been playing it since they received it. They can't wait till the next day in order to play again. They have not found it too difficult and the even asked if there was a Ace in Action movie. They love it and their little sister loves to see them play.
Buy Now

Got a child or grandchild or niece/nephew? What are their favorite Wii games at the moment? What games do they want to get for Christmas?