Meet the Titanic's Rose DeWitt Bukater, in Barbie form. Mattel created this Titanic-themed Barbie doll in 2007 in celebration of the tenth anniversary of the iconic movie, Titanic. They dressed her in a gorgeous rube red dress with tulle and beading accents.

She is a Pink Label Barbie Collector Doll, which means she is aimed at an adult audience and not really meant for playing with and Amazon customers are totally pleased with her for that purpose. She is a wonderful gift idea for any Barbie doll collector or any Titanic enthusiast.

The Making of the Titanic Barbie Doll

The story of the making of the Titanic Barbie doll is unfortunately divided into five parts on Youtube but don't be intimidated. If you are interested, each video is short with the longest one being about three minutes long and each video includes details about how the doll was designed. You will also get to see some interesting footage behind-the-scenes at the facility where the original Titanic movie costumes are stored.

To watch the videos in order, watch the first (large one) first and then click the arrow on the large picture to bring up the second video. Then you can ensure you are watching them in order because I have numbered the parts for you. There are five parts in total.

I think the dress really is the highlight of this Barbie doll and seeing how it was designed in these videos was interesting since it is probably a basis for understanding a process that might be used for each Barbie doll that is produced. Seeing the dress and this Barbie doll will pull on the heartstrings of those who remember how James Cameron's Titanic movie pulled on our heartstrings in 1997... 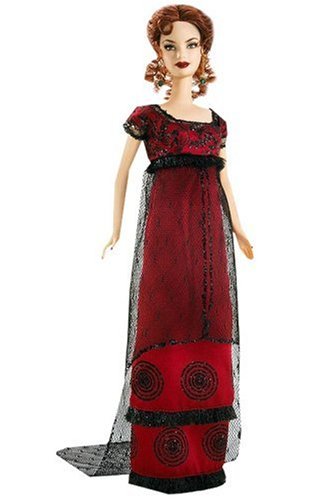 Barbie Titanic Rose
I enjoyed reading through the Amazon customer reviews, which you can do by clicking on this link, which you can do without any obligation to "Buy Now" though those are the words on the link. The very satisfied Amazon customers left interesting comments like, "it will remind you of the movie." Most of the buyers are using the doll as a display piece and collectible, deeming the dress too fragile to be removed, and many gave it as a gift to a Titanic enthusiast and Barbie collector.
Buy Now

Or was she a character created for the Titanic movie?

There is much confusion online about whether or not Rose DeWitt Bukater was a real person.

This unofficial IMDB page implies that Rose DeWitt Bukater was a real person who later married and became Rose Dawson Calvert. They say she survived the Titanic sinking and lived until 1996.

And this Hubpage, The "Real" Rose Calvert from Titanic, says that James Cameron based Rose's character on a real woman aboard the Titanic who was named Beatrice Wood. This second source shares a lot more information and tells of Ms. Wood's decline of an invitation to the premiere of the movie because she was a woman of 104 years of age and in ill health. As a result, Cameron presented her with a copy of the movie in video form, which she also declined to watch because she knew it would be a very sad movie. Dying a few days later, Ms. Wood never saw the movie.

Whether or not "Rose DeWitt Bukater" was real, the love story shared in the Titanic movie was fictional and I thought this story was interesting for anyone who might be interested in Mattel's Titanic Barbie doll.