There are reasons for playing memory games other than memory improvement and fun, and I had one of those other reasons a couple of years ago: dealing with fear.

I'll tell you about that in a minute, along with what kind of memory game the supportive person with me used to take my mind off of what was scaring me. I can't say I forgot about my fear -- that would have been next to impossible -- but dedicating at least part of my brain to the memory game really helped calm me down.

And one doesn't need any type of physical aids to play fun memory games. Here are some suggestions....

And how it helped mitigate my fear

So, okay, I was hiking in the Grand Canyon on what's called the Tonto Platform, which is roughly midway between the rim and the river. I was on a Search & Rescue mission, helping to look for a missing hiker. I was paired up with one other SAR member for this search, and we'd been dropped off by helicopter and asked to hike to another location and search the area. Along the way, the "trail" (what there was of it, anyway) took us right along the edge of a very long way down ... for quite a long distance ... and there was no way to get away from that precarious edge. So I basically froze.

My teammate realized I was no longer right behind him and returned to where I was standing. It was obvious I was afraid. So, he kindly let me hold on to the back of his pack and stare at his feet as we slowly moved along. Then he said, "Okay, we're going to play the Going Camping memory game. Here's what you do...."

It is, but the game really did help me focus on remembering the growing list of things for each letter instead of thinking about falling to my death. And the constant repetition after each new lettered object, going back through all the things I'd said before, took up a good amount of time, while my search partner and I covered a good bit of distance, taking baby steps along the precarious, narrow trail as I remembered my list.

Funny thing is, I guess I was so focused on that verbal memory exercise, I remembered the whole list a year later!

A Book To Help You Remember Things

Because brains need exercise, too

Brainpower Game Plan: Sharpen Your Memory, Improve Your Concentration, and Age-Proof Your Mind in Just 4 Weeks
One reviewer writes.... "Green has created a program that will not only put you on the road to cognitive sharpness, but it's darn entertaining too. I find the exercises engaging and fun to complete. The book further helps by providing you with nutritional information, tasty meal plans (complete with well laid out grocery lists), and physical exercises all geared towards strengthening your mind."
Buy Now

Games for children and adults

You can play verbal memory games with more than just two people. Here are a couple of ideas...

The Icebreaker: A verbal memory game to get to know a little about a lot of people

This one is good for a group of people who've never met. Everyone says his or her name in turn and something he or she likes to do. For example, "I'm Deb and I like to hike." The next person repeats this information and adds their own name and "like" until you've gone through the entire group, each person repeating all that was said before. You can go around a couple of times so that everyone, including the first person who went, has to remember the whole group.

Except for the reader, all participants first listen to a short story. As the story is being read, the others should write questions that relate to the story, with the questions ranging from simple to challenging and detailed. Once the story is over, give the questions to the reader, who will then ask those questions, beginning with simple ones and working up to the harder ones--one question per player. Repeat the questioning until a player gets a question wrong. That player is eliminated. The last player left is the winner.

The "What Was Moved?" Memory Game

This memory game isn't completely verbal, but it doesn't require any special props, and it can be played with two people or a large group, inside or out.

Have everyone study a room or particular area for several minutes. Then have the observer/s leave the room or area or at least cover their eyes (although, in that case, their hearing might help them some, so you might want to have them block their ears as well).

Next, one other person should move a number of objects -- how many is up to you; it can be one, a few, or a lot.

Once that's done, have the observer/s re-enter or uncover their eyes and figure out what's been moved. You can choose to have them write the things down and even note where the objects were moved from and to, and then see who has the most correct.

Here Are Some More Memory Games

A Fun Memory Game for Adults

Lots of laughs and challenging too

This is a memory game for anyone who might need to sharpen their skills and brain cells. The game comes with hundreds of funny memory lists, 46 Senior Moment cards, eight Lost Key cards, two game booklets, a game board, colored markers and a die.

Senior Moments Board Game
From 2 to 8 players can enjoy this game at once. Great for game nights and parties.
Buy Now 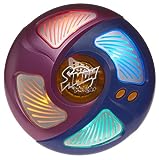 Mostly for kids, but grownups can play -- and exercise their memories -- too

This was one of my favorite games growing up ... and even now. There are several different ways to play this memory game, but the basic game is to repeat the pattern the machine builds with a series of colored, lighted musical notes, beginning with one, then two and increasing in number and speed from there as you respond by pressing the correct buttons in sequence.

This game, which has been around for a long time and still as popular as ever, is suited for all ages. You're never too old to play a memory game.

This is a basic flip-and-match memory game with everyone's favorite monkey. Turn over two pieces. If they match, yay! If not, flip them back over, let the other play take a turn, then try to remember where you last saw two matching pieces and try again.

This game is great for travel in the car or the plane, because there are no loose pieces and the compact game is stored on the board. You choose from fourteen fun themes, then slide a card into the game board and start looking for matches.

This memory game is appropriate for young children. 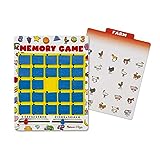 How Well Do You Remember Faces?

This a tricky flip-and-match game, because faces can be difficult to remember. The pictures on these pieces (which for some reason aren't showing here at the moment) are really cute. 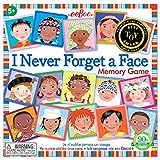 You've Probably Heard of This One

This game can be played three different ways, with the simplest version being a basic matching of memory card pairs. Children as young as 4 can play, with no reading is required. Two slightly more complex games use riddle cards, included.

What Have I Left Out?

If you know of any other verbal memory games -- or at least a memory game that doesn't require purchasing anything -- let me know in the guestbook below. If it fits the bill, I can feature it on this page.

How's YOUR Memory? - Do you remember how you got here?