I hope you will enjoy these looking at these 20th century postcards of New Jersey. They are all "linen finish" from the 1940s. Linen finish refers to the texture of the picture side. It's not the old glossy postcard, it is matte and has texture much the same as linen fabric. i love the look of these old works of art.

Shown in the intro photo is the typical State postcard of the 1940s. In the right corner is a picture of the State Capital in Trenton and in the lower left corner is the State Flower the Violet.

In any event, these are all colorful and very pleasing to look at, so come take a tour with me.

Information on The Back of the Intro Photo

Are you from New Jersey?

Here are two views at the Atlantic City boardwalk

Look at the low building with the Spanish style tile red roof in both the photos. It's on a tan building with an arched window up front and what looks like a movie marquee. I believe this is the same building and it has survived until today.

What strikes me the most is the difference in the clothing the people strolling along the boardwalk are wearing. See how much more dressed up the people were in 1944 than in the current photo.

Many of the women are wearing skirts and dresses and some of the men are even wearing suits or at the very least the mean are wearing sport shirts. None of the people in the old photo are wearing shorts.

These were both published by Tichnor Brothers, Inc. which operated from 1912 - 1987.

One picture is of the famous cyclone roller coaster and the other is of the Cockeyed Circus, which was a fun house.

The park sat on the line of Cliffside Park and Fort Lee, New Jersey. It was west of the Palisades Cliff. Today, this spot is occupied by high rise condominiums.

More New Jersey Postcards from the 1940s - All are unused, and thus there is no postmark This was published by Tichnor Brothers, Inc. Boston, Mass

The back reads: "The George Washington Bridge is one of the main highways into New York City from New Jersey. It was constructed at a cost of $60,000,000 and is 3,5000 ft. long. Beautiful Riverside Drive may be seen in the foreground.

This card was published by Acacia Card Co. 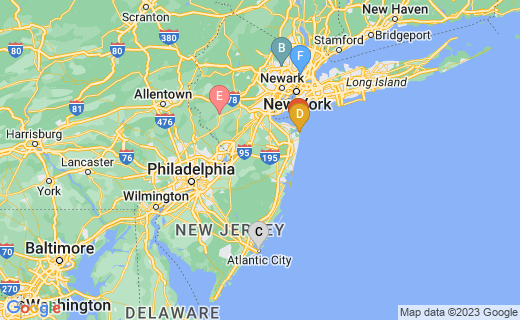 B
Garret Rock and East Side Park:
Paterson, New Jersey

Please let me know you were here