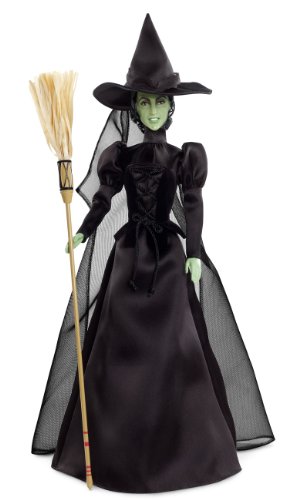 The Wizard of Oz is one of my favorite films, mainly because it is so bizarre, surreal, and wacky!

This wonderful Barbie collector special doll commemorates the 75th anniversary of the great musical film made in 1939. I really love this doll because she is so well made, all Barbie dolls are, and they have clearly modeled her face on Margaret Hamilton's who played the Witch in the film!

The characters of the Wizard of Oz are especially odd; Jitterbugs, Flying Monkeys, Winkies, not forgetting Munchkins, and the people of the Emerald City all make me wonder how Dorothy coped so well – and so far from home too!

Of course Dorothy had the help of wonderful Scarecrow, Tinman and Lion, who assisted her along the yellow brick displaying intelligence, tenderness and bravery against the machinations of the most malevolent Wicked Witch of the West!

This collection of dolls includes all the Wizard of Oz characters - they are all wonderful.

The witch holds very dear memories for me, but I'd love the full collection if I'm honest!

I was so lucky when I was at school because I was cast to play the Wicked Witch of the West. We used to put on wonderful productions and this one was no exception. What fun and wonderful memories!

I was extremely shy as a school child, but a new drama teacher joined us and he helped me so much. I changed from a very shy kid to an A grade student, and eventually I got into university and became a teacher of drama and special needs.

The whole experience of acting in the Wizard of Oz taught me so much as I found the courage to play the Wicked Witch of the West. My drama teacher helped me to look deeply into myself and find the courage to have a go, to take a risk, and this attitude to life has stayed with me. Being the Witch was empowering, and I'm sure her ability to cast magic spells helped me through life too!

Here she is! I think she's very scary. A real witch that kids would be terrified of - poor Dorothy! I loved playing her though - best part in the story I think! People cheered every time I stepped on the stage - lol

I just have to add that they're putting on a production of the Wizard of Oz at my son's school and he's been chosen to play Tin-man - I'm so happy for all the kids; they're heading for a fantastic time. It's their turn now!

I will be helping with the production and doing some directing, which is where my heart really lies. I shall make sure that the witch is very scary and that the wizard is a real power to be reckoned with! The children are all very excited, and so am I!

UPDATE: Our Production of the Wizard of Oz

The production is over now and it was amazing. My son played the Tin-man and and we had so much fun working on the part together at home. It brought back very many happy memories and he enjoyed being in it just as much as I did all those years ago!

My favourite bit was the poppy field, we did this by filling the stage with bright red umbrellas displayed over a huge green canvas - it looked stunning.

The girl who played the Wicked Witch of the West was fantastic too, she really did put her heart and soul into the part and she loved her green makeup - she even painted her nails green!

The play was fantastic - and the kids were great - really happy. It's been a great term for them all. 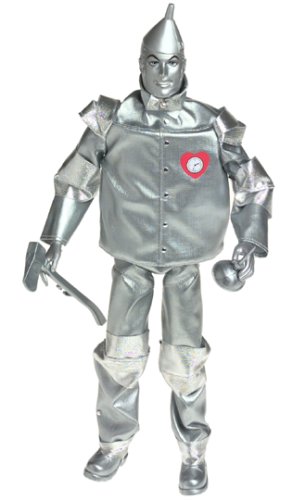 Barbie Ken as the Tin-Man in the Wizard of Oz
The romantic Tin-man with no heart!
Buy Now

As well as the witch, you can collect all the main characters from The wizard of Oz . This is an example of Tin-man as you can see he's just as well made as the witch. Scarecrow and lion are wonderful too.

Below is a large picture of the Cowardly Lion - isn't he wonderful!