Zombies are all the rage these days. They are taking over television, the movies, and even proms with their cravings for the brains of normal humans.

Then play a game of zombie tag. It is the perfect way to experience a zombie outbreak with the comfort of knowing the world as you know it isn't over.

Mold the rules of the game to match your group, the size of the play area, the time frame and so on. Small groups can play in the backyard. Large-scale games will need a bigger space.

The game is exciting with the added bennefit of being great cardio exercise. It will help get you in shape and will serve as a drill in case there is a real zombie emergency.

Zombies are chic right now, so hop on the zombie bandwagon. Keep reading to find out how to play zombie tag with kids, at Halloween, on campus, and even a large-scale game of tag with thousands of players.

The question is, will you survive the game?

Kids love zombies as much as adults do. Play a game of zombie tag at your child’s birthday party. Keep the rules simple to avoid confusing the kids.

Set up boundaries for the game. Pick one person to be the zombie to start. The zombie tries to tag the others. As the other children are tagged, they become zombies and try to tag the humans. The last “human” left is the winner.

If the group is large, you may want to give the humans a token that is removed when they are tagged. This will eliminate squabbles over who is a zombie and who isn’t. The token can be something as simple as a rubber band bracelet.

Play the game multiple times and let different children be the starting zombie.

These pocket-sized zombie figures are great for prizes or to stuff in loot bags.

Which zombies are the scariest?

Zombie tag is killer fun at Halloween. Play it at an adult party or during kids’ Halloween parties. Make the rules more or less complicated according to the age level of the players.

If the group is mostly young children or if you want a simple game for adults who may have consumed a lot of punch, see the game play in the birthday party section above.

For teen Halloween parties and adult parties before the punch, you can add more rules to make the game more interesting.

You can give the humans weapons to use against the zombies. For instance, Nerf dart guns or pairs of rolled up socks. If a zombie is hit with a weapon, he must freeze for 30 seconds or to the count of ten or whatever amount of time you want to use.

Setting up clear boundaries for the game is even more important for teens and adults. You might want to specify that no vehicles are allowed.

What did the zombie eat after his teeth were pulled out?

Pick one person to be the zombie to start. The zombie tries to tag the others. As people are tagged, they become zombies and try to tag the remaining humans. The last “human” left is the winner.

Tokens are definitely a good idea. Every human should begin the game with a token. The human must give the zombie who tagged him the token. Tokens can be Halloween necklaces, foam brains, or any other spooky thing you can find.

Award the last human standing and the zombie with the most kills a prize.

Have a zombie costume contest as well. Let your guests know ahead of time to bring zombie apparel. Serve brain shaped food at the party as well.

After an invigorating game of zombie tag, refresh your guests with some delicious brain food.

How do you know a zombie is tired?

He's dead on his feet.

It doesn't have to be a special day to play zombie tag. You can play it in April or in the snow or on a beach. All you need is a group of friends or even random strangers to chase you.

Just follow the basic game play described in the above sections. You will want at least ten people to make the game interesting.

You can add elements to the game such as a Doctor. The Doctor can have an antidote that can turn zombies back to human. If you have twenty or more people playing, this is a fun addition.

Want to play zombies without having to break a sweat? Grab this deck of Zombie Fluxx cards and shuffle your way to a seated version of zombie tag.

Sometimes you just want to dress like a zombie and shuffle around. Many cities have annual zombie walks.

Basically it is a large group of people putting on zombie costumes and gathering together. It can be incredibly fun, though. Some people can create amazing zombie attire. It can look so real that you want to crawl into a zombie proof shelter.

These events are often parades or marches where the zombies line up and walk down the streets. Sometimes it is even for a cause such as hunger awareness. Some cities have zombie festivals and other zombie themed events such as zombie proms.

Check to see if any cities near you host zombie walks. If not, organize your own. Get your brains working and the zombies will come.

How to Play Humans versus Zombies

Humans vs. Zombies is a giant game of tag usually played on college campuses, schools, camps, conventions, and other places where large groups of people gather.

Games usually last for about a week. Many schools have games with hundreds of players. There is a moderator who passes out bandanas and assigns identification numbers.

The game begins with one or a few original zombies. The zombie must eat a human every 48 hours or he will die. Players who are tagged by zombies become zombies as well.

The humans defend themselves with rolled up socks or by using dart blasters. Zombies who are hit are stunned for 15 minutes.

There are safe zones, such as inside buildings where zombies cannot attack. All players have to stay on campus during the game.

Click here to read more about the official rules of the game and to find out how to organize a game at your school, in your neighborhood, or other site.

This is the perfect gear to survive a game of HvZ. Ward off any zombies with this dart blaster.

Do zombies eat popcorn with their fingers?

No, they eat the fingers separately.

Recently their was an enormous game of zombie tag in the city where I live. There were over 3,000 people playing the game. It was the most awesome adrenaline pumping game of tag ever.

There were a handful of people who began the game as zombies. Everyone gathered in a large field in the downtown area. You could feel the excitement in the air as thousands of people waited for the zombie attack to start.

A few minutes before 7pm, when the game was set to begin, the crowd just got spooked. Thousands of people just began running chaotically at the same time. My heart nearly jumped out of my mouth. There was no choice but to run because of the crowd swarming.

There were several checkpoints in the play area that were safe zones. Humans received a stamp at each one. The person who made it to all the checkpoints first without being tagged was the winner. The zombie who tagged the most people was also a winner.

The game was over in about an hour. The twenty minutes I lasted as a human were absolutely thrilling. If you want to know what a real zombie apocalypse feels like, play a game of large-scale zombie tag. Even though you know it is just a game, it is still nerve racking. Any time a zombie was spotted, people went haywire running and screaming. Some hid, some gave up, some outsmarted the zombie.

If you get the chance to play a large game of zombie tag, do it. It was a blast to play and interesting and a little frightening to see how quickly the zombies can take over a city.

Zombies Are Coming! Everybody Run!

Energize Yourself for the Game 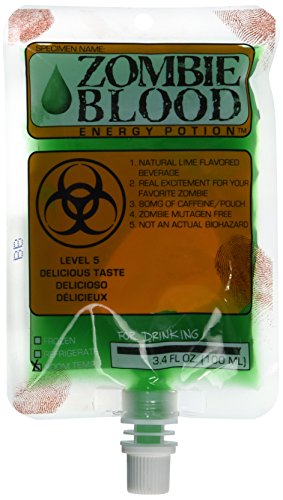 Pump yourself up with this zombie energy potion so you will be fueled to run from the zombies.

Set clear guidelines and make sure people are following to keep the game safe. It is a pretend game of zombies, not a real fight to survive.

Zombie tag can be an awesome adrenaline thrill that is great to play in groups of twenty or groups of 2000.

Young and old alike get their hearts pumping as they run to save their brains from being eaten by the zombies. So be a part of the phenomenon and form your own game of zombie tag.

Do you think you could survive a zombie apocalypse?

What did the vegetarian say when turned into a zombie? 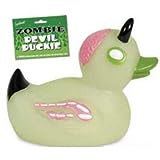 Tag! Tell me your zombie tale.