10 Positive Things About Having a Sprained Ankle 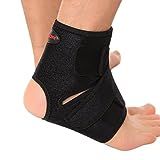 I recently sprained my ankle for the first time in my life. Although I had seen other people with sprained ankles and knew that they looked painful and uncomfortable, I really had no idea just how difficult it is to get about your daily business with this type of injury. It doesn’t help that I live alone in an apartment with no elevator and narrow, steep, curvy stairs that I’ve now learned are carpeted with extremely thin, rough uncomfortable carpet that is more like the faux turf at a miniature golf course than anything actually resembling carpet. And it doesn’t help that I live in San Francisco where I am normally happy to be a pedestrian but now find to be busy, crowded and difficult to get around on crutches.

So yes, I’ve been a little bit mopey and self-pitying about this whole experience. But I try to see the positive side of everything if that’s at all possible. (My old article on 15 positive things about the bad economy is a great example of that.) So I’ve decided to focus on what’s good about having a sprained ankle. And yes, there are actually quite a few positive things that I’m learning to appreciate about this situation.

Here are ten positive things about having a sprained ankle:

1.     I am forced to slow down. This has been incredibly frustrating for me. Although I’m good at taking downtime when I need it, I typically tend to move about at a rather fast pace. And I won’t lie – I’m looking forward to being able to do that again. But there are some good things about slowing down. There’s some truth to that whole “stop and smell the roses” thing. So instead of multitasking my morning while my coffee is brewing, I sit there and smell the coffee and I think that’s actually kind of nice.

2.     I have gained a greater appreciation for the good friends in my life. I live alone and tend to be pretty independent. This is mostly a good thing but I admit that I occasionally have these silly fears that I’m going to die alone in my apartment because I don’t have that quintessential family or even a roommate to buffer the loneliness when it creeps in. But the truth is that I have a lot of awesome people in my life. My boyfriend’s come over to do some of the errands and tasks that I just can’t do without being able to get around properly. I’ve had multiple friends offer to come over to do things, bring things or just keep me company. And my family has called steadily to keep me from going out of my mind with boredom as well as to make sure that I’m okay. I really can’t whine that I’m “alone” because I’m not alone at all and gaining a newfound understanding of that has been a really great thing.

3.     I have gained a greater appreciation for my health. This happens every time I get sick at all but each little bit that reinforces makes me more and more committed to taking proper care of myself, something that I ultimately think enhances the general quality of life.

4.     I have become more empathetic to others who are struggling with disabilities of any kind. When you are sick you feel like the whole world should empathize with you because they’ve all been there. And yet, when you’re not sick it’s hard to remember how bad being sick can feel. It’s kind of the same thing. I’ve always known that getting around on crutches or with some other hindrance is difficult and felt for those people but I feel a sudden deeper understanding of their plight thanks to this situation.

5.     I am able to take time to refocus on my goals. I am currently participating in a monthly journaling project through Swapbot. Basically I write in a journal every day and send it to an assigned stranger at the end of the month. I did this the past two months as well but I’m super focused on it this month since I’m stuck at home a lot just sitting around. One of the things I’m using the journal for is to track my success with various goals. This really focused journaling is allowing me to refocus on what my goals are any why. This increased frequency of focused journaling has definitely been a benefit to me.

6.     My actions are all more purposeful and efficient. This is true in so many ways. For example, it is uncomfortable to move from the bedroom to the living room so before I leave the bedroom I make sure that I have absolutely everything that I might possibly want throughout the day with me. I don’t want to make extra trips back to the bedroom. My actions are focused. And at a more basic level, I don’t want to fall again so my every step is more focused and planned. I definitely believe in the value of mindful activity, which this is. And I definitely think that really thinking through the actions before I do them is making me more productive. Who would’ve thought that a sprained ankle could make me more productive instead of less?

7.     I have lots of time to work. I work from home on my computer. I admit that I’ve taken some days just to whine and feel bad for myself and watch terrible TV but I’ve also been able to spend a lot of time on work so the experience has been productive in that way as well.

8.     I feel better about the times when I’m not doing anything. I think it’s important to take time off from things in life. To just watch bad TV. To just surf the web for hours with no purpose. To just play hours of Words with Friends. The thing is, when I’m healthy and well, I feel a little bit guilty about the time spent on those things. Maybe guilty is too strong of a word but it feels pointless and that frustrates me. I feel like I should be out doing something active, creative and productive. But being mostly immobile I just write it off in my head that some of my time will be spent that way and I’m okay with that. It’s been good to just let those icky feelings of lack of productivity go and accept that downtime is a part of my day. I hope that I’m able to retain that even as I start to be able to do more over the next few weeks.

9.     I have an excuse to say no to activities and events. I actually have no problem saying no to other people when I don’t want to do something. But I often have trouble telling myself “no” when it’s something that I want to do but don’t want to do right then because I feel like I’m going to miss out on something. For example, if I see an art opening that sounds cool, I may want to go but the day of the opening I may just feel like staying home. And I struggle sometimes to find that balance of doing enough to be busy and happy and yet not doing too much. Since I’ve just been saying no to anything, I’ve been reminded that there will always be another event the next day and I’ve become more comfortable with this idea of saying no to myself and not worrying about it.

10. I am getting a ridiculous amount of exercise. Hopping around on one leg has worked my muscles in that leg like crazy. Moving around on crutches has tested me non-existent upper body strength tremendously. My muscles ache with that good kind of soreness (well, mostly good). The ironic thing here is that I hadn’t been exercising much and so I decided to start jumping rope and that’s how I fell and hurt my ankle in the first place!

So, it’s not all bad. Can you think of any other reasons that I should be feeling positive about the sprained ankle?