Amazing Health Benefits of Alfalfa : The Father of All Foods: Grow Alfalfa Sprouts in Your Home

Father of All Foods

In the west, it is mainly known as alfalfa sprouts, but the leaves of the mature plant are edible and fine just like the seeds. The alfalfa sprouts are well known for their healing power. Alfalfa cures a wide spectrum of diseases. It is a performance enhancer for athletes, its has power to improve impaired thyroid function. It can be used against menopausal hot flashes, strengthens the heart and prevents night blindness, just to name a few.

How did it get that name?

In Latin, it is called Alfalfa Medicago Sativa. The most suggested explanation for the word Medicago is descended from medication because it is a medicinal herb against many diseases. Yet there are those who argue that it grew mainly in the wild around the North African city of Medea and that is why it has got that name. Alfalfa is derived from the Arabic word “al-fac-facah "which means ” Father of All Foods "which refers to the many phytonutrients including a large variety of vitamins and minerals contained in these sprouts.

In the Bronze Age, in Iran, Alfalfa was given to horses to make them faster. In China in the 6th century BC, alfalfa used as a remedy for digestive diseases and kidney stones. In Ayurveda, the Indian medicine, its written that alfalfa is good against arthritis. From about 400 BC alfalfa was grown as a medicinal food crop in Europe. The American Indians used alfalfa after processing seeds into flour. In folk medicine, it is used as medicinal vegetable: loss of appetite, anemia, digestive problems such as indigestion, stomach pain and promoting breast milk. Nutritionists confirm that alfalfa the most nutrient-rich food in the world.

The Storehouse of Vitamins and Minerals

For the medicinal properties, the whole alfalfa plant can be used or germinated seeds or leaves. Alfalfa contains more vitamins and minerals than any other plant. In the germinated sprouts the vitamins B1, B2, B3, B6, B17, C, D, E, K and U are in plenty. It contains the minerals potassium, magnesium, calcium, phosphorus, iron, selenium, zinc, boron, silicon, chromium, cobalt,manganese, molybdenum, sodium and aluminum.

There are 14 different amino acids in these vegetables, including eight essential: leucine, Isoleucine, phenylalanine, Valine, tryptophan, methionine, threonine and lysine.

This medicinal herb is a tonic for the pituitary and thyroid. The combination of vitamins, minerals and amino acids provides an increased TRH hormone and works revitalizing, uplifting and invigorating adaptability. By merging these healing forces in the alfalfa sprouts, it can be prescribed as a phytotherapeutic drug in:

This medicinal plant can be used for :

Vitamin K, iron and chlorophyll provide extra blood production, it increases the hemoglobin level. Therefore Alfalfa can be used as a medicine for:

Alfalfa against Rheumatism and Poisoning

Alfalfa is a mild diuretic. That is, it has a dehydrating effect, excess fluid is excreted rapidly. In addition, it can clean the blood of impurities. In particular, chlorophyll is hereby the active substance. It ensures that heavy metals such as mercury, lead and cadmium, and toxic hydrocarbons, such as PCBs and dioxins are discharged from the body more quickly. It is also deacidifying. Through the combination of these facts, it is an anti-rheumatic agent. Rheumatic diseases are in fact caused by toxins that accumulate in the blood. In herbal medicine the use of alfalfa may be noted as:

Where to Buy Alfalfa Tablets Online 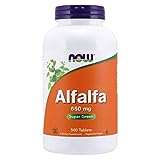 NOW Supplements, Alfalfa 650 mg source of Vitamin K, Green Superfoods, 500 Tablets
“Alphalpha is a super food that I love to take because of the multiplicity of health benefits. ”
Buy Now

Menopausal Symptoms can be countered with phytoestrogens. This bio-identical hormones are healthier than synthetic hormones. There are three types of phytoestrogens found in alfalfa: genistein, and coumestrol biocanine. In addition, it contains a lot of minerals, which also assists against menopausal symptoms. These medicinal properties make it a good medicine against:

Alfalfa Recipe which you can try

Arteriosclerosis is virtually the beginning of any cardiovascular disease. Chlorophyll helps prevent calcium from adhering to the walls of the blood vessels. Lime or calcium indeed plays a role in atherosclerosis. In addition to calcium deposits, it can oxidize cholesterol and together with calcium adhere to blood vessel walls. This can be avoided by many antioxidants. Alfalfa is a vegetable that is relatively one of the most antioxidant-rich: it actively helps to prevent arteriosclerosis. In addition, alfalfa is a natural blood thinner, strengthens the rutin present the blood vessels. These medicinal properties make alfalfa to be used against:

Methyl methinine protects and restores damaged liver, intestine and stomach mucosa. It is a digestion-promoting agent in that it contains enzymes. Chlorophyll has a laxative effect and also deodorizing. Moreover, the germinated alfalfa sprouts are an antispasmodic agent. These medicinal properties of alfalfa helps to get rid of:

Where to Buy Alfalfa Seeds Online?

The many phytonutrients and especially chlorophyll and L-canavanine provide a resistance increasing effect which alfalfa is a vegetable that virtually keeps all diseases at bay. It not only prevents disease, but fights diseases which already leads. In particular, infectious diseases can be combated with the help of these culinary responsible sprouts. It can be used to lower blood sugar, the probability is very high that you need less insulin if you regularly eat alfalfa. For these reasons, the medicinal sprouts are used against:

Buy seeds and grow them yourself, it takes 3-4 days before they are ready and it is much cheaper . Grow in a in a plain large glass jar. It's super easy! Plus, homegrown is always the best.

You will need about 1/3 cup seeds. Start by rinsing them a couple times. Use a thin kitchen towel, linen if you have.

Drain. Always hold the jar upside down so that all the water runs out. Repeat about 2 times a day.

The sprouts after two days, start to grow a little tail. Continue pouring in a little water and place the jar upside down. The sprouts grow best in the dark.

After 4 days the sprouts will be ready. When the sprouts start to get big, you should take them out of the closet and let the sunlight make them green. Then you can eat them.

Storing the seeds in the refrigerator. They stay fresh for about 4 days.