Antipsychotic Drugs: Should We Be Alarmed?

Antipsychotic medications have been around since the 1950’s and were originally developed to use as a surgical anaesthetic. They are grouped by the terms “typical” (first generation) or “atypical” (new generation). The typical antipsychotics are still used today, but considerably less than the newer atypical drugs. They were originally known as neuroleptics and then major tranquillisers before being classed as antipsychotics.

A third generation drug known as Aripiprazole or abilify is now used to treat bipolar disorder and clinical depression. Antipsychotics are mainly used in the treatment of the following:

Although primarily a type of drug used in mental health treatment, antipsychotics are also used in the treatment of nausea and can be found in some cough remedies and antihistamines.

Interesting consultation video with a lady who has tardive dyskinesia

Originally the neuroleptics would have been used to treat acute anxiety and they still are such is their sedatory effect, but eventually they began to target such symptoms as delusions, paranoia and hallucinations seen in psychotic conditions including psychotic depression. They are also used to treat mood swings as seen in bipolar disorder.

Many years ago, I had cause to wonder why so many mental health patients seemed to have a permanent stoop as they walked. Actually they didn’t walk; they seemed to be propelled forwards quite quickly! I saw patients grimacing and lip smacking constantly, trying to talk around facial tics and what appeared to me to be a case of gurning. I thought this was a “mental illness”! I truly thought those were the symptoms of their illness. Little did I know back then that these symptoms, visual to all, were side effects from antipsychotics. These kind of side effects sadly draw much attention.

I know several people quite well even now, who have such side effects. One 54 year old lady I know has developed the shifting foot movements of akathisia, whereby she repetitively moves her feet whilst standing in the same place. She also has a tendency to move her lips in a chewing type gesture. She has bipolar disorder and has been on and off antipsychotics for over thirty years.

It must be stressed that the aim of this article is not to scare people but to give them the facts; facts that most doctors don’t actually tell people when they first start taking antipsychotics.

Antipsychotics and their Side Effects (Cambridge Medicine (Paperback))
Buy Now

Side Effects of Antipsychotics

Below is a list of some of the side effects encountered by patients who have been placed on either typical or atypical antipsychotics. The list is not exhaustive and it should be noted that some of the more serious side-effects such as tardive dyskinesia, can have a considerable delayed onset with both generations of drugs.

As you can see from the above, the old and newer generations of antipsychotics don’t differ much with regard to recorded side-effects.

Apparently those taking olanzapine and risperidone do have less chance of the side effect dystonia and tardive dyskinesia seems less likely with the newer drugs generally. It is difficult however, to believe this information, when you consider that most of the atypical drugs have only been in use for a few years. The lady I know did not start experiencing her worst side-effects for around twenty years!

The newer antipsychotic drugs are also supposed to have a better effect on things such as motivation and generally caring for oneself better.

Clozapine has a better record so far with some of the more serious effects like tardive dyskinesia and dystonia but there is a price to pay for that! Increased salivation is quite common and it can affect your bone marrow, making infections more likely. It is also more likely you will have epileptic fits on this drug and risk inflammation of the heart muscle. Although patients do admit to feeling much better on clozapine and despite the less serious side-effects, doctors are more likely to try one of the other atypicals first.

It is known that the atypical antipsychotics are as likely to cause weight gain as the typical drugs and usually this is rapid. They can also cause abnormalities in insulin sensitivity. It is a known fact that diabetes is more likely in those who are overweight and so type 2 diabetes is going to be a potential risk for those on antipsychotics for the long term. The lady I know with bipolar disorder has a problem with weight gain and has developed diabetes.

Similarly to other psychiatric medications, psychiatrists may need to try you on different antipsychotics when treatment commences. It may take time finding one that suits you and you can tolerate OK. This may even mean that you have to take one of the older antipsychotics which have a greater risk of the more serious side-effects, (if we can believe the latest facts on the atypical ones).

FDA Alert - Risk of death with antipsychotics in elderly dementia

The fact of the matter is, that although antypsychotics do tend to stabilise some symptoms such as described, you risk a whole host of other physical symptoms in the process of taking them, whether from typical or atypical drugs. Not only that but you can also retain some of those more serious symptoms even after you have withdrawn from taking them. The longer you are on them, the higher the risks are for this.

You must not suddenly stop taking antipsychotics without a doctor’s advice as you risk a severe psychotic episode or other severe withdrawl effects.

Whilst I know there is a risk of side-effects with almost any prescription medication, the particular side effects when taking antipsychotics, especially long term, can be devastating and in some cases life threatening! It has been found that the practice of administering antipsychotics to the elderly with dementia, particularly in care homes, has been proving fatal for some.

Shrinkage of the grey and white matter of the brain has also been noted after long term use of antipsychotic drugs.

A presentation of tardive dyskinesia in a child

Use of Antipsychotic Drugs in Children and Adolescents

In the past few years there has been an increase in children and adolescents being treated with antipsychotics. In the US, twice as many children are apparently put on these medications than in Europe! The most usual reason for the prescribing of these drugs for children is for a behavioural problem. Given the long list of side effects, some potentially dangerous and debilitating, have all other avenues really been explored before using such potent medications? Is this kind of medicating justified?

Antipsychotics have helped many people around the world to regain some quality of life when suffering with psychotic illness and even though we have a second and even a third generation of antipsychotic drugs, it is clear that they are still far from ideal medications. All antipsychotics have the potential to cause horrendous side effects. Only a small proportion will get the more serious side-effects, but should anyone have to suffer such life changing side-effects? The answer is that there is nothing to replace these drugs right now and that is a very worrying scenario. 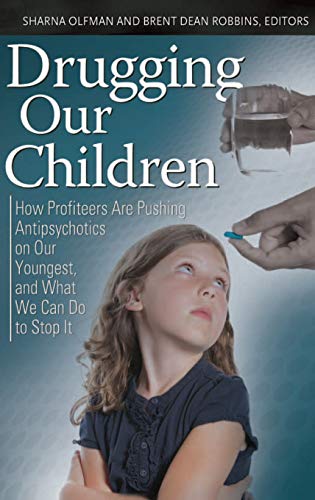 Drugging Our Children: How Profiteers Are Pushing Antipsychotics on Our Youngest, and What We Can Do to Stop It (Childhood in America)
Buy Now