BCAA Supplements: What Are BCAA Benefits and Side Effects?

Intense strength, endurance, or plyometric exercise on a regular basis puts the body under constant stress. Colds, infections, fatigue and muscle breakdown are conditions fairly common for the serious athlete. One way of preventing these issues is taking health supplements. Of the many available on the market, branched chain amino acids, or BCAAs, provide four major benefits:

There has been extensive research conducted on the benefits of BCAA supplementation indicating a positive correlation between BCAAs and improved health of athletes. Those studies also indicate that there are no serious side effects to BCAA supplementation.

BCAAs may helpful in increasing protein synthesis before or after strenuous exercise. Protein synthesis helps build non-fat mass and prevent muscle degeneration. BCAAs are metabolized in the muscles rather than the liver, so if there is enough protein in the diet to be burned as fuel while exercising, the rest is used to build new proteins, which may lead to muscle growth, or at least less muscle loss.

It’s well known that since high performance athletes are constantly taxing their entire body, they often have more colds and infections than the average person. This is because energy is directed away from the immune system in favor of physical recovery. BCAAs may increase plasma levels after working out, which thereby increase white blood cells and helps prevent infections and colds.

There is a growing body of evidence that points to BCAAs preventing central fatigue after workouts; central fatigue is a loss of power output from the central nervous system. In other words, overtrained athletes may generally experience more energy and fewer feelings of physical fatigue after strenuous exercise when taking BCAA supplements.

Additionally BCAAs have been used to prevent muscle deterioration in the elderly, to treat burn victims, aid in recovery after surgery, and treat patients with liver disease and kidney failure. The research on these benefits isn’t as well documented at this point in time but it does give further indication of the overall efficacy of branched chain amino acids.

A study in 2010 in that appeared Medicine and Science in Sports and Exercise tested 24 healthy but untrained males for post workout muscle recovery. The study found "when soreness measures were compared, the participants who supplemented with BCAA reported significantly less soreness." The researches concluded that supplementing with BCAAs before and after intense exercise can reduce the overall muscle recovery time. 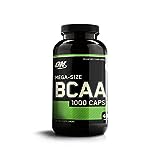 Dosage recommendations vary but I personally take 2 capsules of Optimum Nutrition BCAA in the morning and 4 capsules just before going to bed at night. This delivers 1500mg of L-Leucine, 750mg of L-Isoleucine, and 750mg of L-Valine absorbed over 24 hours.

A number of trainers recommend taking BCAA 30-45 minutes prior to working out and immediately following a strenuous workout. Because I take a pre-workout drink and a whey protein shake immediately following my workout, I prefer to take my BCAAs before and after the longest time period – sleeping – during the 24 hour day that I don’t have protein intake. I feel this is the best way to prevent any muscle loss. As with all nutritional/training recommendations it is best to try your own combinations and determine what works best for your individual body.