Believing In Good Or Bad Luck ~ All A Matter Of Perspective

Not The Best Solution For A Runny Nose!

Rod Stewart ~ Some Guys Have All The Luck ~

Good Luck Or Bad Luck, It's All A Matter Of Perspective...

I remember reading a story in the news a while back about a man who had a runny nose. This wasn't just any runny nose. This was a constant drip, drip, drip that went on for at least eighteen months. Nothing he did would stop it. He took medications and had to constantly keep tissues with him. It was not only annoying, at times it was embarrassing as well.

He found out through medical tests that this wasn't your run of the mill ... kind of like a pun... runny nose. Nope, this was his brain fluid leaking down into his nose and dripping. Constantly, non-stop. I remember when I saw this story, my first thought was "this is what probably would have happened to me, because 'I'm just lucky that way.'"

There was a happy ending for him, though. His doctors WERE able to do surgery and repair where the leak had been and the man is now free from his continuous runny nose. I bet he is VERY glad about that!

Anyway, after my initial reaction of ewwww and feeling a little nauseous at the very thought of what had been happening to that man for over a year... I thought of that phrase that first popped into my head "I'm just lucky that way." I thought about all the times I've carelessly used that phrase. It isn't that I've had any more of a share of bad luck than any other person in the world.

In fact, I bet I've had a lot more good luck than many people have had in life and not so much bad luck. It's just that the bad luck times are the ones that we are more prone to remember. They seem to stand out in our memories and become ingrained, making us think we surely must have more bad luck than others.

I think it's really all a matter of perspective. If you look at life in a grateful way, feeling as if you really have been lucky and try to take life with an attitude of thankfulness and gratitude, I believe things will seem to you as if you've had some very good luck in life after all.

This whole luck and life thing got me thinking and I began to do some research on the Internet, because I am a curious person by nature. I found one story that was mind blowing to me. It was about people who might just be some of the unluckiest people in the entire world. Bad luck just seems to follow them wherever they go, unrelenting and hounding them in a persistent way.

Three Of The Unluckiest People On The Planet! No, Seriously ~

I came across these articles about some of the unluckiest people in the world, and two of these unfortunate souls had stories that really stood out for me.

First, there was a man who once worked as a Park Ranger for the U.S. Park Service, in the Shenandoah National Park in Virginia. His name was Roy Sullivan and the reason he is so unlucky? He was struck by lightning seven times.

Now the chance of getting hit by lightning just one time in a person's life is about 3,000 to 1. Those are some pretty steep odds. Once you get to your SEVENTH time of lightning bolts landing somewhere on your body, I think it's time to play the lottery. Because you have just successfully overcome 22 SEPTILLION to 1 odds as if they are an everyday occurrence.

Scientists have tried to explain this guy's... unique... attractiveness to lightning bolts - without much success. They attempted to claim that it was because of his job, working in the forest where there is a tendency for thunderstorms to naturally occur. But they never could come up with an acceptable likely reason for him being struck seven times by lightning.

The first time he was hit was in 1942. He was working in a lookout tower, when suddenly a bolt of lightning hit his leg and exited through his big toe... and in the coolest thing ever to happen to a person, it shot his toenail into the air. OK, so maybe I'm the only one who thinks that cool... ehem. It's that bizarre sense of humor of mine again kicking in.

At one point, a lightning strike set Roy Sullivan's hair on fire, so he thought it would be a good idea to carry water around with him wherever he went. The next time lightning struck him, it hit his ankle, so the water did no good whatsoever.

I guess Roy Sullivan really could have said "I'm just lucky that way" and meant it!

Another atrociously unlucky person was a lady by the name of Violet Jessop. She was unlucky for quite a different reason. She was on-board THREE different ships in her lifetime, all of which sank. What are the odds of that? I don't even want to know!

The first ship she was on was a sister ship of Titanic, called the Olympic. This was in the year 1911, and she was a stewardess on-board the ship. In September of 2011, this ship collided with a British warship.

Feeling as if she should probably look for someplace else to work, she promptly found a new job ~ on the Titanic. We all know how that one ended. The captain of the Olympic was, coincidentally, also the captain of the Titanic, Edward J. Smith. You might think AHA, that HAD to be the reason for the two ships sinking!

Still, what could the chances have been that the same woman would be on both ships when they sank? Violet made it into one of the lifeboats on-board the Titanic, and found her way to safety. She watched incredulously from the lifeboat as the Titanic went under, first one end and then the other, kind of like in the movie. I can't begin to imagine what thoughts were going through her head as she watched the Titanic go down.

This isn't the end of her story, however. She decided to take a break from working jobs on the sea for a few years. Then, in 1916, she accepted a job on-board a third ship. This one was called The Britannic. There was no way this could happen again, right? Wrong. This unfortunate ship ran into a mine and sank. Violet made it onto another lifeboat, only this lifeboat didn't get far enough away from the ship.

Violet found herself having to JUMP into the water this time and thought, this is it. She hit her head on the boat's keel, and she miraculously survived... for the third time. She made it back to dry land.

She died in 1971 of heart failure. And guess what? She was buried at sea. A "fitting" or is that an "ironic" end to one especially unlucky person's life.

Last But Not Least ~ The Unluckiest, Luckiest Man!

Then there is the story of a music teacher from Croatia who escaped death while being involved in seven accidents in his lifetime. Yes, you read that right ~ seven different times he escaped being killed, while there were other casualties in some of these accidents.

The first one is said to have happened in the winter of 1962, when this music teacher, Frane Selak, was on a train going through a canyon. It was freezing cold and raining at the time, and the train ended up being derailed. Most of the train ended up in a river. Fortunately for Selak, however, someone was able to reach him and pull him to the shore and to safety. In that unfortunate accident, seventeen other people lost their lives.

In 1963, he decided to take a trip in a plane and it turned out to be the last time for him. One of the doors on the plane malfunctioned, and he was pulled through a hole in the plane door. He managed to land on a soft enough haystack and survived the ordeal. Unfortunately, nineteen other people lost their lives in this mishap.

Frane Selak's third brush with death came about in 1966, a mere three years later. It turned out that a bus that he was in careened off the road and into an icy river. Four people perished in this incident, while Mr. Selak was able to swim to the shore and suffered only bruises and cuts.

The fourth incident happened in 1970 when a car he was driving caught on fire. He managed to get free of the car before the fuel tank blew the car up. In 1973, a fuel pump in a car he was driving began to leak. A leak of oil caused fire to blow in through his air vents, causing him to be burned and have his hair badly singed, but he was fortunate not to have other injuries.

The next incident happened in 1995, when Frane Selak was hit by a bus in the town of Zagreb. Fortunately, he only had minor injuries in this mishap.

The last incident happened in 1996 when he was involved in a major head-on crash with a United Nations truck. It happened on the curve of a mountain where the accident caused his car to break through a guardrail. Because he wasn't wearing a seat belt, he was ejected from the vehicle, which ended up saving his life as he watched his car plunge down the mountainside.

In an even more bizarre twist of fate, he won the lottery, over a million dollars. This happened coincidentally just a couple days after his 73rd birthday. He married his fifth wife about this time and a few years later, he ended up giving most of the money away, opting for a more frugal way of life. He decided that money didn't matter. Because of all the experiences he had in his lifetime, he was lucky just to be alive and he wanted to share his winnings with others who could use the money.

There are definitely lessons to be learned from Frane Selak's fascinating, seemingly tandem unlucky and lucky life. It just takes a bit of thought to glean those lessons from his incredible story.

Not Even Close To Being So Unlucky

Now I think the next time I say to myself how unlucky I am... I will look back and remember these two unfortunate souls an think... I am NOT so unlucky after all, in fact, I am VERY lucky!

Yes I am! I am blessed beyond belief lucky. Geez, I feel my nose starting to drip... can it be? Nah, no way... there it went again. It can't be.... I need to go find a kleenex~ brain fluid? No way ~ I can't possibly be THAT unlucky!

Do You Believe In Luck?

Do You Believe In Good Luck And In Bad Luck? 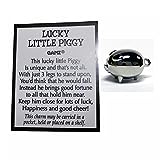