Bell peppers are native to Mexico, Central Northern South America though today you can find them growing in most parts of the world. China today is the leading producer of bell peppers followed by Mexico.

Available in a variety of vivid colours ranging from the common green colour it is available in white, yellow, orange, red, purple, brown and even black colours. They are all from the same plant Capsicum annuum and belong to the nightshade family of which potato, tomato and eggplant are members.

Also known as sweet peppers, capsicum or simply peppers, bell peppers are plump and bell-shaped with a thick, crunchy flesh. Compared to other cultivars of this species, bell peppers are almost sweet with pungency ranging from zero to minimally hot.

Green and purple peppers are slightly bitter while the red, yellow and orange ones are sweet in taste.

Bell peppers are not hot as capsaicin which accounts for the pepper's hotness is present in extremely small amounts in bell peppers depending on their colour.

All types of unripe bell peppers start off green in colour but depending on the cultivar its genetic colour is exhibited when it is allowed to mature fully.

The coloured bell peppers are more expensive than the green ones as they need a longer time to harvest.

Cooking bell peppers on low heat for a short time preserves the delicate phytonutrients it contains as studies have found that high heat destroys a high percentage of them.

Paprika is prepared from dried red bell peppers as well as from chilli peppers. 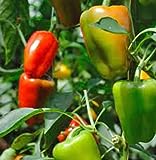 Depending on their colour, different coloured bell peppers have different nutrients predominant in them. For example:

Green peppers have an excess of chlorophyll, yellow ones have a higher amount of lutein and zeaxanthin, the orange ones more of alpha, beta and gamma carotene. Red bell peppers have more of lycopene and astaxanthin.

Bell peppers are an excellent source of over 30 carotenoids and along with tomato are the only 2 vegetables that contain at least 2/3 of the 8 nutrients like vitamin E & C, and the carotenoids, alpha-carotene, beta carotene, lycopene, lutein, cryptoxanthin and zeaxanthin.

Red bell peppers have the maximum amount of vitamin C, carotenoids and total antioxidant capacity among all coloured bell peppers.

They are low in calories and fat unlike chilli peppers and provide just 31 calories per 100 grams.

The red bell peppers provide more than double the amount of vitamin C than the green ones while their vitamin A content is almost 9 times higher and the beta carotene content almost 2 and one-half times more.

Bell peppers contain low levels of several B complex vitamins and many minerals. 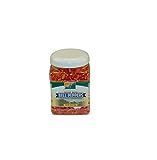 Bell peppers are rich in a variety of phytochemicals which give them excellent antioxidant properties. They thus help to neutralize free radicals and help in reducing the risk of heart disease and cancer.

They are an extremely rich source of vitamin A which makes them good for providing and maintaining eye health, protecting against cataracts, boosting immunity and lowering cancer risk. The lutein and zeaxanthin content also prevents the development of macular degeneration and cataracts.

The beta carotene in it protects against breast cancer in young women while lycopene lowers the risk of ovarian cancer.

The anti-inflammatory properties of bell pepper provided by beta carotene, zeaxanthin and vitamin C not only reduces inflammation of arthritis and rheumatism but also reduces the risk of cardiovascular disease and cancer.

The synergistic effect of lycopene and vitamin E both of which hare found in bell peppers reduces tumours of prostate cancer.

Apigenin and vitamin B6 reduce the risk of breast and lung cancer predominantly.

Bell peppers prevent the oxidation of cholesterol and thus prevent the deposition of plaque in arteries also due to its high levels of quercetin and luteolin.

The good folate content lowers the risk of heart attack as it improves blood flow and lowers blood pressure.

Bell pepper also protects against the development of type 2 diabetes due its vitamin C, dietary fibre and cryptoxanthin content. Even the caffeic acid found in them reduce diabetes risk.

As you can see many nutrients in bell pepper are multi-purpose in action preventing a number of diseases and health conditions.

Consume organically grown bell peppers as these have higher levels of carotenoids, phenolic compounds and vitamin C as has been found in a study.