Birthwort { past and present medicinal uses}

Birthwort, Aristolochia clematis belongs to the order of plants known as the Piperales and the family within that order known as the Aristolochiaceae. It is referred to as the European Birthwort.

Here we look at the species and its past and present medicinal uses. as always we start with a description of the subject under review.

The root of this species is perennial, long,cylindrical,slender, creeping and fibrous. The stems which arise from it are simple,upright, round and striated,growing in a zigzag manner about two feet high.

The foliage is arranged alternately .The leaves are heart shaped,obtuse,of a bright green colour above and paler and veined below they are borne on stalks.

The flowers are of a greenish-yellow colour and rise,several together from the axils of the leaves,they are borne on short stalks. The calyx {sepals etc} are monophyllous, tubular,swelling at the base,dilated on one side of the mouth and lengthened into a strap-like lobe. there are six anthers. The fruit that succeed the flower is an oval capsule with six corners and six cells,and as many valves.Each cell contains numerous triangular seeds.

The common birthwort occurs in most of the temperate regions of the world and may be encountered in woods,copses and near the ruins of Nunneries,{ especially in the south east of England. as far as the UK is concerned.} ,They produce flowers in July and August. 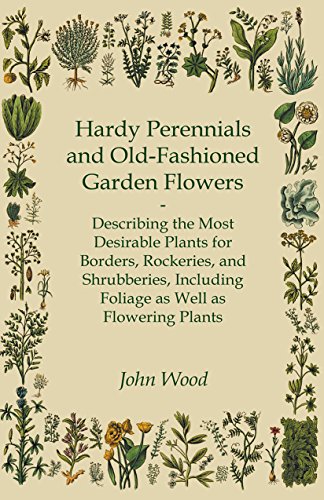 Hardy Perennials and Old-Fashioned Garden Flowers: Describing the Most Desirable Plants for Borders, Rockeries, and Shrubberies, Including Foliage as Well as Flowering Plants
Buy Now

Past medicinal uses and historical observations.

The root was said to have a slight aromatic smell and a warm ,bitterish taste. It was found that the juice gave a red tinge to blue paper,and the aqueous infusion was not altered by Sulphate of Iron. Spirit, it seems, was the best method of extracting the virtues of the roots, however, by distillation in water a small quantity of essential oil was obtained,having the odour and the taste of the root.

Orfila enumerates the plant among the narcotic-aerial, poisonous, but others decided that the quantity requisite to produce poisonous effects was so large, that accidents seldom occur! Hippocrates, Galen and other writers, both of remote and relatively more recent times highly extol the virtues of Aristolochia. The roots were used against uterine 'purges' and against gout.

Dr.Gilibert attributes to the infusion diuretic and as an emmenagogue {increases menstrual flow},properties and recommends the powder of the root in wine to be given in chlorosis { a disorder common at one time in adolescent girls characterized by a pale greenish yellow skin weakness caused by insufficient iron in the body} ,dropsical affections and intermittent fevers,and humid asthma. The dose of the infusion was half an ounce of the powder from a scruple to a drachm and a half. { Apothercary's measures}

Dr.Cullen { Materia.Medica.vol ii page 296} states-" In some cases of retention and chlorosis, as a warm and stimulating medicine ,I have found it useful. it makes a considerable part of the Portland powder, and has been employed in the same manner as that powder,to be taken every day for some time;but though it may prevent the recurrence of the gouty paroxysms , the long continued use of such medicines is extremely hurtful, and commonly brings on a state of disease more fatal than the original distemper.

By the late 1700's its use as a vulnerary , in common with many other plants was considered obsolete.There are many other species of Aristolochia which were claimed to have medicinal properties and the Aristolochia serpentaria -Virginian snake root was once considered a valuable stimulating diaphoretic and tonic,

Millspaugh in his book 'American medicinal Plants' {1887 page 138-2} states that A.serpentaria is indigenous to North America,ranging from the state of Connecticut to Indiana and thence southward. It grows in rich shady woods and blossoms in July. "The flowers of this plant, like those of the Asarum are usually hidden beneath the dry leaves and loose to mould of its chosen localities. "

Strange as it may seem almost all the species of this large genus are esteemed by the natives of the countries in which they grow,as remedies against poisonous effects of snake bites. Millspaugh,goes on to say that the parts used was the dried root, coarsely powdered is covered by five parts of weight of alcohol and kept eight days in a well-stoppered bottle in a dark ,cool place being shaken thoroughly twice a day. Millspaugh also alludes to its physiological action by stating " Jory{ Materiatien zu einer Kunftigen Heilmittellehre,1825} determined as a result of his experiments that serpentaria an excitation of the alimentary tract with subsequent determination of blood to all the abdominal viscera {intestines}, more frequently followed by flatulence than mucous secretion. The symptoms usually following doses of from 2.5 scruples of the root were- copious salivation,eructations, great nausea and vomiting;a sense of weight in the stomach;distention of the abdomenwith itching at the anus;a sensation of heat,and a weight in the head followed by Cephalagia;violent and frequent desire to urinate with greatly increased discharges of pale watery urine"

Jacob Bigelow 'American Botany',speaks of the Virginia snake-root-" It is probable that this root,like many other articles now used in medicine,was indebted to its sensible qualities,for its first introduction into use. As the name imp[lies its earliest medicinal character was founded on its supposed antidotal power against the bite of venemous serpents"

" Cornutus, at the end of his book on the plants of Canada,published in Paris in 1635,tells us that a root had been sent to him from 'Northa Anglia' which was called serpentaria,and in the vernacular tongue snagroel--The root was a very sure safeguard against the bite of a huge serpent in that country,which proved inevitably fatal within twelve hours,unless a good portion of the antidote was swallowed in a season; which being done,no one ever known to be in danger of his life from this cause"

Mr Bigelow goes on to say,--" Medicinally considered the serpentaria is a tonic,diaphoretic and in certain cases an anti-spasmodic and anodyne---it is peculiarly useful in supporting the strength,and in allaying the irregular actions which attend great febrile debility,such as subsultus tendinum,delirium and watchfulness It is most advantageous given in combination with bark,or with wine and opium.The compound tincture of the bark commonly referred to as Huxham's tincture,containing serpentaria as one of its ingredients"

Many species of Aristolochia were used in herbal medicine in India. Both A.clematitis and A.serpentaria are poisonous plants and should never be taken internally. The above information is for historical interest only and not meant in any way a guide to self medication.

All Aristolochia products are banned in the USA,having been connected to kidney failure. Arictolochic acid is poisonous and causes serious problems in the digestive tract,inflammation of the kidneys and miscarriage.

According to the Poison Garden website {the poisongarden.co.uk}, it is one of the best examples of the problems arising from the belief that the look of a plant determined the use in medicine, this belief was referred to as the Doctrine of Signatures were every plant gave a sign either by colour or form of what disease/affliction, it was meant to be useful against. In the case of this species the palnt produces flowers that were considered to be vagina shaped. This was a devine sign to our ancestors that the plant should be used to treat vaginal problems and also to aid childbirth {birthwort}.

It may have been responsible for thousands of deaths since ,at least the Roman times. Its poisonous component aristolochic acid,continues to kill as a result of upper urinary tract cancers resulting from its use in medicinal preparations.

It is quite possibly one of the most poisonous plants and almost certainly one of the most harmful,the acid has been shown to cause complete kidney failure. In 2001, the FDA,issued a warning to consumers to immediately stop taking herbal medicines containing aristolochic acid.

Just after the second World War,family doctors in north west Bulgaria noted a high incidence of kidney disease but only in some areas. in 1956, a study of 664 patients was published noting that the disease formed clusters in villages,and sometimes single households. Following the publication of the report other disease clusters were reported in what was then Yugoslavia and parts of Romania. As more was discovered about the disease it was noted that there was a raised incidence of urinary tract cancer.

Following two international conferences in the mid 1960,s the condition was designated the Balkan Endemic Nephropathy { BEN}. After a long investigation the cause was finally linked to wheat {hence the flour} being contaminated by Aristolochia.

A clinic in Belgium used herbal products based on another plant of the same genus as a diuretic. After a few months,some of the patients experienced kidney failure. The clinic was treating patients for Obesity.

The only conclusion from these facts is to keep well away from any products containing Aristolochia extracts.

That said there is no harm in growing the species for ornamental garden plants A.Clematitis being a favoured species because of its low growth,foliage and pretty yellow tubular flowers. Others of the genus are grown as climbing plants many of which can attain the height/length of seven metres { 23 feet }. Species such as A.grandiflora, also referred to as the Pelican or Swan flower and A.elegans are often chosen by gardeners to cover trees or unsightly buildings.