We all know it as Black Cohosh. Its scientific name is Actaea Racemosa and it's sometimes called bugbane. This herb is a member of the buttercup family. It is native to certain areas of North America.

Native Americans figured out its medicinal properties a couple hundred years ago. They shared it with Europeans who took it back home. Still, it wasn't until the 1950s that non-Native Americans really started to take it seriously.

The root and rhizomes (the branches that grow underground from the root) are used for medicinal purposes. It is said to be made up of several different chemical compounds that can heal different types of ailments. It is widely used for perimenopause and menopause symptoms--especially for hot flashes.

While it has an effect on estrogen, it seems those affects are different in different parts of the body. WebMD.com states that it is not an “herbal estrogen” but acts like estrogen for some women. 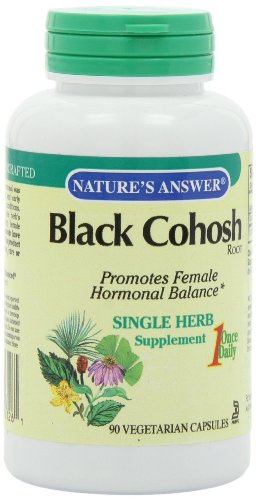 Natures Answer Black Cohosh Root 50 mg Capsule - 90 per pack - 2 packs per case.
These capsules are taken once daily. They are organic and vegetarian.
Buy Now

How much should you take?

When I first looked into trying Black Cohosh I found it in doses of 200 mg and more. There weren't any guidelines for use at these online stores, so I decided to see what the experts suggested. Scientific research into the medicinal plant is relatively new and standards for usage are anything but settled.

For example, WebMD.com lists the dosage for menopausal symptoms between 20-80 mg. The National Institute of Health recommends 40-80 mg. The Mayo Clinic had completely different guidelines. Their recommended dose was 6.5-160 mg daily. That's a huge variation from three sources.

I went with 50 mg because it was somewhere in the middle. Frankly, it was the smallest dose that I could find in capsule form. Before Black Cohosh I experienced several hot flashes a day. After 4 weeks on Black Cohosh, my hot flashes were down to one a week.

Women of a Certain Age

Do you experience hot flashes?

It takes time to work

I started taking 50 mg a day about two months after my first hot flash. At first, I saw no change. The hot flashes came with the same ferocity for a couple of weeks. It took about 4 weeks before I felt like they were lessening in intensity, but I wasn't sure if it was just a fluctuation in my hormones.

Then, at 6 weeks I was sure that it was working. I was no longer being hammered several times a day. My hot flashes were coming maybe once or twice a week, if that.

Eight months into my usage I took a break. I went off of it for two weeks. I started taking it every other day to see if I could go with a smaller dose. By the end of the third week, I began getting hot flashes in the evening. A week later, I was having them multiple times a day again. When I returned to my regular daily dose, the hot flashes diminished.

While I've had good results, others have not. A relative saw no change after several weeks on a higher dose. It's not really clear why it works for some but not others. But, that's the way it is. I guess it's like most medicine. Different people have different experiences.

How do you know if you've taken too much?

As I mentioned, dosage varies depending on who you ask. Most companies sell it in larger dosages than recommended. Some as high as 500 mg per capsule.

So, how do you know if you've taken too much? Some of the symptoms include diarrhea, nausea, vomiting, headaches, and abdominal cramps. If you experience any of these symptoms discontinue usage and seek medical help.

It is always best to consult with a physician before starting any alternative medicine. This is even more important if you are taken medication for other health conditions. Drug interactions need to be addressed.

Are you really having hot flashes?

I remember when mine started. I'd be watching TV in the afternoon when my face would get very hot. It would start somewhere around my nose, radiate across my face. Then, it would move down my neck and end up somewhere around my elbows. It was the strangest thing.

My first thought was that my arthritis was attacking my nose. It has a tendency to pick a joint, attack it for several weeks, then move on. Something told me this was different.

It took a couple of weeks before it dawned on me. I was having hot flashes! I had just turned 50 and was already experiencing other perimenopausal symptoms. I got confirmation from my doctor. Since I already suffered from an auto-immune related disorder, I needed to be sure I wasn't developing something new.

When I was younger, I would scoff at those who had hot flashes. Thyroid problems and arthritis had left me with periodic night sweats, fever like symptoms, and flaming joints. I figured since I'd gone through all that hot flashes would be a piece of cake.

Yeah, right. They started coming more frequently, sometimes one after another in the afternoon. Then, they started hitting me in the evening during dinner. The house would suddenly seem too hot. It would overwhelm me. It could be 50 degrees outside and I wanted to turn on the air conditioning.

Because I don't tolerate medication very well, I was leery about taking another prescription drug. My doctor recommended Black Cohosh and I figured “Why not?”

Our ancestors had many uses for Black Cohosh. It was a staple in their medicine bag. Not only was it use to alleviate the problems associated with menopause but it was known as an effective insect repellant (hence, the alternative name bugbane).

In the last few years, researchers have become more interested in its properties. While only preliminary studies have been done, there is some hope that one compound, isoferulic acid, which reduces inflammation might be helpful to arthritis sufferers. It also contains phytoestrogen which may help inhibit bone loss for those suffering from osteoporosis. There was hope that it might reduce the hot flashes caused by the breast cancer treatment tamoxifen, but studies show that it has not been effective.

Try it as Tea 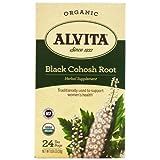 Alvita Black Cohosh Root Tea Bags Organic - 24 Tea Bags
Have trouble with capsules? You might prefer it as a tea.
Buy Now