I developed adult-onset asthma two years ago. I'm still trying to get it under control with the help of my doctors.

The Harvard Medical School Guide to Healing Your Sinuses

After being diagnosed with Chronic Sinusitis, I decided to do a little research to find some sinus relief. I found a book called '

The Harvard Medical School Guide to Healing Your Sinuses'.

I have found this book to be easy to read and full of the most helpful information out of all the other sinus and allergy books I have read. It was broken down into short, easy to read and understand sections. Since I have read this book and put the principles into practice, I have calm some of my sinusitis symptoms and get some relief.

The Sinuses In Health And Disease

Part one covers the sinuses in health and disease.

Some topics that the authors cover are:

What is sinusitis? Sinusitis is the inflammation of sinuses. 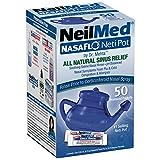 NeilMed NasaFlo Unbreakable Neti Pot with 50 Premixed Packets
I use the NetiPot on days when the pollen count is high or I have been gardening or if I have a cold or congestion or if I was near someone who was sick. It helps to flush out pollen, mucous and bacteria. Remember to add the premixed packet in or it will be painful.
Buy Now

The list of sinus treatments from simplest to most complicated include:

There are three main symptoms for sinusitis.

1. Pain and pressure. Headaches, pressure behind the eyes and even pain in the upper jaw and teeth can be a symptom of sinusitis. People have had teeth pulled thinking that the problem was their tooth and later found out that the problem was sinusitis and they never needed to pull the tooth. If an upper tooth is in pain, have a Dr check your sinuses to see if it may be a sinus issue.

2. Difficulty Breathing and Congestion. Swollen nasal membranes and excess mucus make it difficult to breath through the nose.

3. Postnasal Drip. During an infection, the volume of mucous in your sinuses increases. The mucus can become thick and turn either yellow or green. You may also feel like you have a tickle in your throat from all the excess mucous draining down the throat.

Some other symptoms of sinusitis include:

Some things you can do to alleviate the symptoms of sinusitis include:

1. Take a painkiller. Acetaminophen (Tylenol), ibuprofen (Advil & Motrin) and aspirin all can help by relieving the pain from sinus pressure and headaches.

2. Don't dry out. Drink lots of water! This will thin the mucous so it can drain from your sinuses. If you are dehydrated, your mucous will be thicker and it will not move out of your sinuses as easily. Mucous trapped in your sinuses can cause sinus infections.

3. Irrigate your nose. Use a Neti-pot regularly. I like the NeilMed Neti-Pot. It's cheap, natural and very effective.

4. Seek steam. Breathing in steam can help loosen mucous which helps it to drain from your sinuses.

5. Use ice. Put ice or a cold compress on any area that you feel sinus pain.

Part Two covers nonsurgical treatments for sinusitis. Most of the sinusitis remedies in this section can be done at home. Part two covers everything from sinus irrigation to steroids for your sinusitis.

Alkalol Solution Original Nasal Wash, 3 Count -16 fl oz
I add a little Alkalol to my Neti Pot to help clear out my sinuses. It also adds a refreshing scent to my sinuses and gets rid of the awful smell that I smell in my sinuses when they are infected. Start slowly with a few drops when you first start using it. Once your sinuses get used to it, you can start adding a few more drops at a time.
Buy Now

Nasal irrigation or nasal rinsing is inexpensive, easy and natural. This book recommends that you rinse your sinuses two times a day if you have sinusitis. It washes out excess mucous and other unwanted debris like bacteria, mold, dust and pollen. Nasal irrigation opens up your sinuses and gets debris out that could cause sinus infections.

If you do have thick mucous, a product called Alkalol can thin mucous while you irrigate your sinuses. I have tried it and it works wonders. I do not recommend putting much in your nasal irrigator, maybe only a few drops the first time and work your way up over time. It is very strong and stings at high concentrations. You can buy it at the drugstore on online. It is a great natural supplement for thinning mucous! 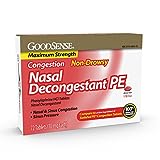 GoodSense Maximum Strength Nasal Decongestant PE, Phenylephrine HCl, 10 mg Tablets. Nasal and Sinus Congestion, Sinus Pressure, 72 Count
When my sinuses feel swollen, I use a nasal decongestant to open them up. If they are swollen too long, they can trap bacteria and become infected. You can buy actual Sudafed from the pharmacy since it is a controlled drug or you can buy an equivalent online or in-store.
Buy Now

Cold And Allergy Medications That Are Recommended For Sinusitis

1. Decongestants help relieve congestion. Sudafed is a decongestant. The active ingredient in Sudafed is Pseudoephedrine. I would recommend buying the generic form since it is much cheaper.

2. Mucus-thinning agents help alleviate thick mucous and postnasal drip. Mucinex and Humibid LA are two mucous thinning agents that you can find at your drugstore. The active ingredient is Guaifenesin.

3. Antihistamines help to alleviate allergy symptoms, such as drainage, itchy eyes and nose, and sneezing. Antihistamines can be broken down into three categories: sedating, non sedating and other.

a. Sedating antihistamines include: Benadryl (Diphenhydramine), Chlor-Trimeton (Chlorpheniramine), Dimetane (Brompheniramine), and Tavist (Clemastine). Take these before you go to bed since they may cause drowsiness.

c. Other antihistamines include: Zyrtec (Cetirizine)

Steroids: A Way To Reduce Inflammation, Congestion, and Polyps

The steroids that this book is talking about are not the same as body-builders use. Steroids can be taken orally or by spray. They have powerful anti-inflammatory agents that reduce nasal swelling and the size of nasal polyps.

Nasal steroid sprays normally take 4-5 days to start working. Flonase is the most well-known nasal steroid. They are safe to use daily and are non-addicting.

Oral steroids are prescribed by the Doctor to block inflammation in the nose and sinuses. They normally start working within 24 hours of the first dose. They are highly effective and can even shrink some large nasal polyps. There is a draw-back though.

Long-term use of oral steroids can cause osteoporosis with weakened bones, thinning of the skin with easy bruising, and a compromised immune system with susceptibility to infection, as well as cataracts, stomach ulcers, fluid retention, and a host of other serious side effects.

I had to wait two weeks after my last steroid pill before I could get the flu shot since my immune system was compromised because of the oral steroids I was taking for my latest round of sinus infections and bronchitis.

Antibiotics: The Mainstay of Sinusitis Treatment

Sometimes antibiotics and steroids are used in conjunction to knock out an infection. The steroid gets rid of inflammation so the mucous can drain out of your sinuses and the antibiotics kill the bacteria in the mucous.

Diet And Lifestyle: How Everyday Decisions Can Affect your Sinuses

Some things that can irritate sinuses causing sinusitis issues to worsen are: food allergies (Milk & Wheat), alcohol and smoking. If you have sinusitis, you can try to avoid these triggers to see if you get any better.

1. Food allergies: Try an avoidance diet for 2-4 weeks. Try avoiding milk during one period and wheat during another. See if there is any improvement when you do avoid these foods. If there is, you may have food allergies.

3. Smoking: It damages the lungs and impairs function of the cilia in your nasal passages and sinuses that sweep our mucus and debris, which can lead to infection. The best thing to do is to stop smoking and stay away from others while they are smoking.

Shorten The Duration Of Colds

Zicam Cold Remedy Citrus RapidMelts, 25 Quick Dissolve Tablets, Clinically Proven to shorten colds when taken at the first sign, homeopathic, 25 Count (Pack of 1)
Zicam helps by giving you the vitamins and minerals needed to fight a cold, which in turn helps to shorten the length of the cold. The RapidMelts are easy to take on the go if you don't have anything to drink nearby.
Buy Now

Some alternative therapies for sinusitis include: acupuncture, herbs, vitamins, and homeotherapy.

1. Acupuncture: Most of the patients who have tried acupuncture to cure their sinusitis have reported that it helped relieve their headaches and pain associated with sinusitis.

2. Herbal Therapy: Among the herbs most frequently claimed to alleviate sinus symptoms are the following: echinacea, goldenseal and bromelain.

3. Vitamins: Vitamin C and Zinc are the two supplements most often claimed to prevent infections. Zicam, a zinc-containing nasal gel, has been shown to reduce a cold's duration if you start using it within the first twenty-four hours of the onset of symptoms, but you have to use it every 4 hours for one to two weeks for it to be effective.

Do you suffer from Sinusitis?