Boston at Dusk: A Story to Help Heal Bereavement

Author's Note: The characters and events in this story are purely fictional, and resemblance to any real persons is unintentional and coincidental.

Amanda Zinni, Lucy's 71-year-old mother, had been detained for shoplifting. During Lucy's entire twelve-year practice as a criminal law attorney, she never had to face the personal embarrassment or potential loss of integrity that taunted her now. Amanda Zinni had never stolen so much as a pen in her life, so the call from Sergeant Brown took Lucy quite unexpectedly. Sunlight, interrupted by occasional leafy shadows, reflected off Lucy's windshield as she drove, bewildered, down Cambridge Street. She parked her car and entered the police station.

“Hello, Miss Zinni,” Sergeant Brown greeted from the reception desk. Lucy had prosecuted hundreds of Sergeant Brown’s arrests over the years. The station smelled rather stale and musty today, as though Lucy had entered the Bruins’ locker room. Certainly no one, especially Lucy’s mother, would want to spend any time locked up here when there was such a beautiful, late summer day waiting outside the station walls.

“Take your hands off me,” the elderly woman scolded. “I don’t belong here—my daughter’s an attorney. Just wait until she hears about this!"

Sergeant Brown assured Lucy that there would be no record today. Lerner’s store manager had reported the old lady walking out with a dozen lingerie items bulging out of her tote bag. The manager had decided not to press charges against Amanda because all garments had been recovered without damage. Besides, she had been a good, long-standing customer and was elderly.

“Thank you, Sergeant,” Lucy said. “I’m sure this won’t happen again—will it, Mama?”

“It had better not!” snapped Amanda.

Lucy’s face flushed slightly as she smiled to the sergeant. Would it do any good to lecture her mother about “right and wrong” at this stage of her life? Probably not. Yet, something was amiss. Lucy just didn’t know what to make of the situation.

“Come on Mama, let’s pick up a couple of nice sandwiches from Luigi’s Deli and head for the gardens at the Commons. We’ll have a nice picnic lunch, hmm?

“Not the Commons—let’s go to the mall.”

The wondrous smells of garlic and basil saturated the air around the deli, and the minestrone soup with bread and salad richly satisfied the palate and appetite of both women. In spite of the success of the meal, and shortly following, Lucy forcibly pried a sterling silver teapot from her mother’s grasp that she tried to confiscate from the Brass and Silver shop, kitty-corner from the luncheon deli. Lucy now recognized the seriousness of her mother’s problem. She couldn’t watch her mother all afternoon, and suddenly Lucy’s career seemed jeopardized—the Griffin case, a manslaughter issue was soon due. The trial was just two weeks away, and Lucy had barely begun to review it. Judge Heatherton had already granted one Motion to Extend, so asking him for additional time was out of the question.

Lucy took her mother home to 12 Exeter Street where they had resided since Oliver Zinni’s death in 1966 when Lucy was only four. Amanda never remarried. A generous supply in the family estate allowed the woman to raise her daughter and perform charitable works for the community. Lucy felt obligated to return her mother’s devotion, yet she didn’t want to break Everett Johnson’s trust, since they had been law partners since Lucy began her practice. Lucy decided to call the office.

“Ronnie, it’s Lucy. I won’t be able to make it back to the office this afternoon. I’m taking my mother to the hospital. Please make sure Everett knows.”

“Yes, ma’am.” With that, the phone conversation ended.

“I don’t want to go to the hospital. I’m staying here.”

“You have to come, Mama. You need a checkup.”

“I don’t know, Mama, but you’re not yourself today.”

“That’s nonsense! Of course, I’m myself—who do you think I am?"

“Mama, you normally don’t go around picking up lingerie and sterling silver without paying.”

“What are you talking about?”

“Please, Mama, let’s see if the doctors can find something—do this for me.”

“No, you ungrateful child!” Amanda screamed.

Lucy tried to guide her mother’s shoulders toward the door only to struggle with the woman’s incessant resistance.

The hour at the hospital went slowly for Lucy. Her mother was admitted at 4:30 p.m. and had been given a mild sedative. Lucy was both saddened by her mother’s condition and partially relieved. She waited to talk to the doctor. After about forty minutes, the attending physician appeared.

“I’m Dr. Stephen Rushford.” The doctor’s hand felt warm as Lucy shook it. “I would like your mother to stay at the hospital for observation and testing. Is that all right?”

“We’ll be doing blood tests and a full neurological workup. Results probably won’t be known until early Monday. I’ll have the nurse go over the necessary papers and answer any questions you may have.”

Lucy slept restlessly that night. Childhood memories with her mother filled her dreams, intermittently interrupted by the harsh reality that the bed where her mother normally slept was empty, and that the wholesome woman she had known as mother was now a frail remnant, far removed and hollowed out by life’s cyclical changes. Even a middle-aged, successful professional could cry, and Lucy briefly allowed hot tears to purge her feelings of abandonment and despair.

Although she awoke to a sunny morning, Lucy felt a gripping emptiness as she drove to the office. She stoically picked up her mail and messages from Ronnie, who respectfully kept silent. Lucy’s feelings lightened ever so slightly when she saw Everett.

“Is your mother all right?” Everett asked.

“Come into my office.”

Everett had the stability of a twenty-year marriage and a large family with good relationships to confidently direct the conversation. Lucy sat down. Everett waited a moment for her to breathe. Then, “What do the doctors say?” he ventured to ask.

“Are you sure you can prepare the Griffin case?”

“Do I have a choice?” Lucy asked, wrenching her hands together.

“Oh, Everett, we’ve been good partners for how long now?”

Lucy sighed. “When I went to pick up my mother from the police station yesterday, I didn’t know what to think—and then, after lunch, she grabbed a silver pot that I knew she had no intention of buying—like some kind of crazy kleptomaniac.”

“Let’s see if the doctors find anything.”

Silence. Lucy gazed at the statuette of the Goddess of Justice, blindfolded and holding the scales of balance, on Everett’s bookshelf. The figurine reminded Lucy of her commitment to the legal profession.

“Do you need to take the day off?” asked Everett.

She thought a moment “I think it will actually help me to focus on some work,” she finally said.

“Good enough. I’m preparing for a deposition on the Dreymore case. Let me know if you need anything later. I’ll be in the office most of the day.”

Lucy had Ronnie hold her phone calls, except from Faulkner Hospital, and she prepared herself a cup of chamomile tea that she took into her office. After closing the door, which she normally only did during client conferences, Lucy opened the Griffin file and began to read. At first, the words on the pages seemed to blur in her mind, but, slowly, she was able to concentrate. By lunchtime, she had finished her summary, and she decided to return to Luigi’s Deli in an effort to put yesterday’s event with her mother into perspective.

At the hospital seven o’clock that evening, Lucy visited her mother, who had slipped into a comatose sleep. The head nurse advised a short stay.

Lucy recalled from her religious upbringing that a loved one could often hear and feel a visitor’s intent, especially if that person were a child or someone who cared deeply. She looked at her mother’s withered face, framed by gray hair.

Lucy could say no more. If she tried, she knew her voice would crack. Memories of happier moments with her mother flashed through her mind—picnics at the park, trips to the museums, and the carefree train rides to Salem and Nantasket. Then Lucy kissed her mother’s cheek and left the hospital.

Two days, including evening visits with her mother at the hospital, similarly passed. Lucy began to handle a few in-coming calls at work and continued to prepare for the Griffin trial. She was at home Saturday morning when the announcement came from Faulkner Hospital. The soul of Amanda Scafari Zinni had passed from the screen of life. A small brain tumor of the frontal lobe showed on Amanda’s CT scan, partially explaining the erratic behavior at Lerner’s that day, but it made little difference now. Lucy dutifully made arrangements for a cremation.

She took the full, three-day allotted bereavement away from the office and repeatedly visited places where she had spent time with her mother—the town’s square, the art museum, shops, restaurants, and the movie theater. At dusk on the third evening, she decided to sit on the park bench in the Common where they had often fed breadcrumbs to the pigeons and told jokes. She could almost hear her mother’s soft laughter—gone now. And the fleeting memories failed to fill the void in Lucy’s aching heart.

At a celebration lunch after the Griffin trial, Everett made a suggestion. “You know, Lucy,” he said, “I know of a nursing home program that you might want to check out. It’s sponsored by the George Faulkner Nursing Home near the hospital and connects people with the elderly who have no one to visit them.”

“I never thought of that,” admitted Lucy, stirring her tea and slowly sipping. “Thanks, Everett, I’ll check it out.”

The following weekend, Lucy made a visit to the nursing home. Cheri, the nursing home’s receptionist was more than happy to explain the Adopt-a-Companion program. Lucy learned that she could not only visit an elderly companion at the home, but even take the companion on outings. Currently, a dozen or so elderly persons qualified and were enrolled in the program. Lucy suddenly felt the first bit of hope after her mother’s passing and decided to fill out the necessary papers, which only took about twelve minutes to complete.

“Wonderful!” Cheri commented when she accepted Lucy’s application. “It’ll take just a few days to process this, and we’ll be in touch right away.”

Lucy carried a new demeanor as she went into the office the next day.

“Good morning,” she said brightly as she walked through the door. Everett gave her a smile and a wink as he took his coffee into his office.

Lucy’s companion turned out to be Georgette Simynski, a brown-eyes woman seven years older than Lucy’s mother. Lucy found the woman not only to be warm and friendly, but someone who had a keen interest in literature and fine arts.

“Would you like to help me feed the pigeons at the Common?” asked Lucy, wondering whether such an activity was out of bounds.

“This is the nicest time of the evening, just as the sun’s going down.” ***

Author's note: The following video contains a poem with accompanying music. The presentation ends at 3:58, then repeats with the original images, but without music. If you wish, you may use the silent part for deeper reflection.

Did You Know? The Boston Common is the Oldest City Park in the U.S. 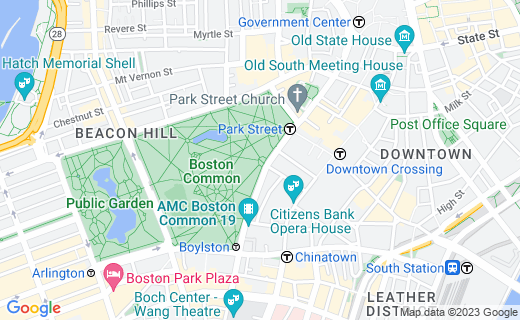 How Much Do You Remember About the Story?