Do Clexane Injections Leave A Mark?

I've had experience with soft tissue hematomas as a result of regular injections I received for a medical condition.

One of the questions I get asked all the time is "Do Clexane Injections Leave A Mark Or Scar"? The short answer is yes, the injections do leave marks and since I have to administer Clexane injections on a daily basis I deal with this type of "injury" very frequently. As you can see in the photo my tummy is often bruised and has lots of little white marks on it: tiny scars.

This article is going to take a look at why Clexane, also known as Enoxaparin, injections are prone to creating scars and what it is we can do about it.

What Is Clexane and When Is It Used?

Clexane is an injectable form of Heparin which is used to thin the blood and lower platelets. These injections are used for many types of medical conditions but the most common time it is used is during pregnancy. Other conditions that require you to take Clexane include blood disorders such as Factor V Leiden, heart patients, those who have recently had a stroke, blood clot patients and others needing to reduce their platelet counts.

How To Use Clexane

Since Clexane is an injection it is fairly simple to use. Just clean the area, pinch the skin, inject the Clexane and if you catch a blood vessel just wipe the blood away after a few moments. If you are fairly lean and don't have a lot of fat on your stomach you might find going into your thigh, or even under your arm (with some help) a lot more comfortable. Injecting Clexane into the muscle can be very painful so you want to find a nice little pocket of fat so that the body can take its time absorbing it.

If you need some more detailed instructions you can find them in my Side Effects of Clexane article. 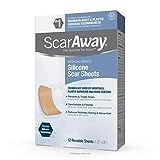 ScarAway Silicone Scar Sheets shrink, flatten and fade scars, 12 Reusable Sheets
ScarAway is a great way to get rid of stubborn scars. It can be used on newly formed scars to drastically reduce their appearance. If you have the patience you can even improve the look of older scars too, just give it a couple of months and the older scars will flatten, narrow and even lose their redness.
Buy Now

In answer to the question "Does Clexane Leave A Mark?" the answer is yes, it does leave a mark. However, it's probably not as bad as you were expecting. Whenever you pierce the skin you are damaging it, thus creating a healing response from the surrounding cells. However, depending on how your body reacts to these types of wounds will depend on how big the final mark is.

If a Clexane injection has gone well you will go straight in and out without any pain or pressure and the small hole in your skin will heal within a few minutes.

On the other hand if a Clexane injection was tough or went wrong for some reason you may find yourself with a hematoma, bleeding, pain, and the entry hole quite large compared to normal. If this does happen then you'll need to treat the area and care for it as you would any other injury.

It is very important to get the needle in right the first time because if you badly hit a blood vessel then the Clexane will be onsite straight away, which is bad. Since Clexane works at thinning the blood and reducing the platelet count your body is going to have a very hard time with clotting. To create a clot your body makes the surrounding area sticky so that platelets will catch forming a plug to stop the bleeding which then turns into a scab, which in turn falls off once the vessel is healed. If your body can't do that then you'll just keep bleeding, however, eventually it will stop but you'll be left with a pool of blood in the nearby tissue which is called a hematoma.

For the hematoma you may develop a lump called a subcutaneous hematoma and I have written a separate article on how to care for them: How To Treat a Soft Tissue Hematoma.

For general skin care you can moisturize the area to keep the skin nice and supple and avoid drying out the skin: Top 5 Moisturizers For Dry Skin.

5 stars for Scarring From Clexane Injections

In the last year my medical condition has leveled out so that my doctors have put me onto Warfarin (an oral anti-coagulant). I just wanted to give you an update about the scars, bruising and hematoma left by the Clexane injections.

I found that by following my own advice as stated above I was able to keep these problems to a minimum.

So, for those of you who are on Clexane as a temporary measure don't worry about the short-term problems as they will go away you just have to be patient with your body and it will heal in it's own due time.