Empty Womb - When a Pregnant Mother Suffers a Miscarriage

Miscarraige is Often a Sad Ending for an Excited Mother

It was my son's fifth birthday party. My middle sister was there, glowing with the excitement of her first pregnancy. She had waited a long time. First, she had to convince her husband it was a good time to start a family. They were married for five years before they finally started trying.

After a year of infertility, they discovered the problem: thyroid disease. Treatment took another 6 months, but then they quickly got pregnant afterwards. The new baby would be due in late June, close to my sister's birthday. She circulated darling homemade announcements and we squealed with delight together at the news. I was expecting too (twins!), and my youngest sister was also expecting. All around exciting times for our family.

Halfway through the party, before we even sang "Happy Birthday," my sister emerged from the bathroom, pale. She whispered to me that she was spotting. I assured her that this was normal for early pregnancy, but she could not relax. She was worried she was suffering a miscarriage. She and her husband soon left for the hospital, and I prayed that her 10 1/2 week pregnancy would be just fine. Three hours later, I received the phone call that I will never forget. The baby was lost - she had miscarried.

No one had an answer.

We tried to go out to cheer my sister up, but what can you say to someone who has suffered such a loss? I sat in her car for hours afterwards, sobbing with her, holding her hand and basically just listening to her grief.

Signs of a Potential Miscarriage

In general, the highest risk of a miscarriage is in the first trimester of pregnancy (weeks 1-13). Given that a woman does not even know she is pregnant until at least week 4 or 5, there is an approximate 2 month window that is particularly important to watch. While miscarriages can, and do occur after week 13, they are much more rare.

The statistics are interesting, but not necessarily comforting. It is estimated that up to 40-50% of pregnancies end in miscarriage, but many of these are not even known by the mother. Further, more than 60% of fertile couples will suffer a miscarriage at some time. Many are lost before implantation, and others are "pregnancies" that occur without a fetus accompanying the sac or placenta. Once a fetal heartbeat is detected (usually around week 10), only 5% of these pregnancies end in miscarriage.

The symptoms of a potential miscarriage include:

Note that you may have these symptoms with a perfectly normal pregnancy. 90% of pregnancies with bleeding at 7-11 weeks go on to full term! However, you should definitely call your doctor if you notice any of these signs. While it will not be of comfort to the mother who could lose a baby, many miscarriages during the first trimester are nature's way of aborting those with chromosomal defects that either would not survive outside of the womb, or would be severely impaired. 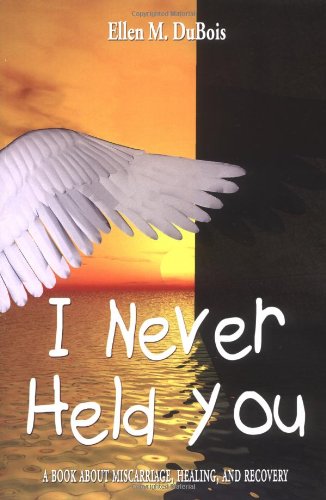 I Never Held You: A book about miscarriage, healing, and recovery
Buy Now

You may be more at risk of a miscarriage if you are over the age of 35, or have a history of miscarriages. If your mother's side of the family has had miscarriages, that may also increase your chances of having one. If you have had a previous baby with a birth defect, let your doctor know, as well.

Chronic diseases such as uncontrolled diabetes may also increase your risk. Consider whether your uterus is mis-shaped or if you have fibroid tumors, too, as these may be factors. Certain bacterial or viral infections during pregnancy (measles, herpes, hand and foot disease and other bacterial infections that can be contracted from ingesting soft cheeses) can also result in miscarriage. Sometimes, hormonal factors are involved, such as Cushing's Syndrome, thyroid disease or polycystic ovary syndrome. Be sure to have a complete screening before trying to conceive.

The good news is that there are factors that you can control to reduce your chances of miscarriage:

More good news is the fact that using laptop computers and electric blankets will not cause miscarriages. Nor will exercise or having sex (except in very rare circumstances). So enjoy life!

The bottom line is that you should be in excellent health to have a baby. Obviously, being younger helps (but not too young, of course). It helps to stop ingesting potentially toxic substances at least 6 months before you plan on trying to get pregnant, and to take at least 400 milligrams of folic acid every day. Even if you not trying to get pregnant, the FDA recommends that every woman of childbearing age take folic acid to reduce the risk of birth defects, given the fact of "accidental" pregnancies!

Things Not to Say to a Parent Who has Miscarried

How Do I Know if I Miscarried?

A doctor will perform an exam. First, he or she will examine the cervix to see if it is dilated and/or if the uterus is enlarged to an appropriate size for the weeks of gestation. An ultrasound may be performed. Sometimes an HGC test, which measures the level of the pregnancy hormone in the blood is also run. My sister's doctor determined that her cervix was dilated and ran an HGC test. The baby was gone and her HGC levels were dropping, showing that the pregnancy had been lost.

Depending on how far along your pregnancy is, and other factors, you may need to have a D&C (dilatation and curettage) to remove the extra tissue in your womb and prevent the possibility of infection or hemorrhage.

At times, the baby was never even viable from the start. These pregnancies are sometimes called "chemical pregnancies." At conception, some of the information that is required to be transferred from sperm to egg gets "lost." The fertilized egg begins to die at that point, but the actual miscarriage does not happen until weeks later. Bleeding is usually the first sign that something is not right. Fortunately, these circumstances are rare and should not recur with the same parents.

Depending on the causes of a miscarriage, ovulation can occur again within 4-6 weeks following a pregnancy loss. Most doctors will recommend that you wait until you go through at least one more menstrual cycle before trying to conceive again. More importantly, you should wait to make sure you are emotionally ready before trying again. This will vary between individuals; some should wait 2-3 months, or more. Doctors may even advise you to wait up to 9-12 months.

The exciting news is that the chances of conceiving subsequent to a miscarriage is 80-90%. Even if you have had two miscarriages, you can still have a 75% chance of a successful pregnancy afterwards.

My sister's very next pregnancy was a success. She had a baby boy in September (just 3 months after her first baby would have been due). Between her first and second children, she suffered an ectopic pregnancy, but fortunately for her, did not lose the tube.

You never know what your chances truly are. Personally, I had a brief period of infertility between my second child and my twins (my last pregnancy). My middle sister had 2 miscarriages. My youngest sister had a surprise pregnancy (uneventful) and then 5 years of infertility, going through IUI, and in vitro to conceive her second child, due to endometriosis. As of the date of publishing this Hub, she is due in 2 weeks with another boy!

No matter what, try not to despair. Talk to your doctor and determine if there are factors that you can change to improve your chances the next time around. If odds are against you due to age or health conditions, you may want to consider alternatives now, such as donor eggs, surrogacy, or adoption. Personally, I know many people who started these processes only to find out that they finally conceived and successfully brought a baby to term! Even if that is not in the cards, however, you can rejoice in the excitement of bringing a new family member into your life in other ways. It is a very exciting time!

I Would Die for That