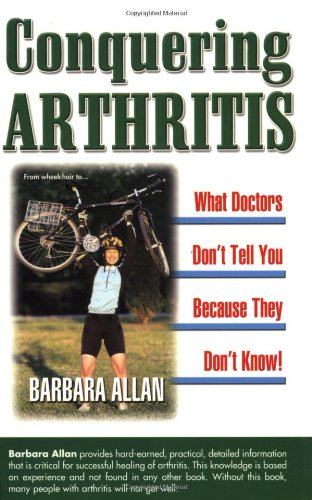 Conquering Arthritis: What Doctors Don't Tell You Because They Don't Know: 9 Secrets I Learned the Hard Way
Buy Now

Diet may play a major role on stiffness and pain

While information on arthritis highly abounds over the Internet, not many arthiritis sufferers today are aware of the fact that food may play a major role in causing or preventing their all too well known, arthritic flare ups.

The most common foods an athritis sufferer ahould avoid are those that we commonly already label as "bad" such as: sugar, caffeine, red meats, and fatty foods to just name a few.

Avoiding these foods may prove challenging as you will have to read all prepared food labels carefully. Potato starch, tomato paste, flakes of pepper can easily be found in many common prepared foods. Also, it is challenging to figure out if you are sensitive to any of these vegetables or other foods, since their effects may be felt from 48 hours up to 6 months!

Other arthritis sufferers have noticed that foods that are affected by mold have played a good role in worsening symptoms. Foods that are particularly vulnerable to mold are:

Always check these foods carefully for mold or avoid them all together.

Some sufferers have noticed improvements by reducing their gluten intake. It appears that gluten increases the inflammatory state of joints that causes much pain in artitis sufferers. Cutting on gluten would mean you would have to avoid foods containing gluten such as:

Arthritis sufferers have noticed their symptoms aggravated after using dairy products, they have seen improvement after banning:

There are a couple of beverages as well you may want to stay away from:

Soft drinks are too high in phosphoric acid and coffee causes loss of minerals and important nutrients.

Rhubarb especially when eaten in excess can create arthritis problems. It's oxalic acid content causes improper absorption of calcium and iron that may be found from other foods.

Citrus fruits have a bit of a contradiction. As a fruit it should help arthritis sufferers but some say their acidic content actually worsens symptoms. To avoid citrus fruit take away from your diet:

Many arthritis sufferers have found good results once they altered their diet. Banning certain foods may turn out though the most challenging part.

If you feel overwhelmed by the varieties of foods you must avoid try to think of it in a lighter, positive note, rather than focusing on all the foods that need banned, focus on all the good healthy foods available to eat!