When this review was originally published in early 2011, the findings were mostly positive. However, the treadmill is now less that a year old, and the controller board has failed. This part is only covered for 90 days under the manufacturer's warranty. The replacement cost, including shipping, is over $180.00, and is only warranted for another 90 days. In doing a little research on-line, I've found many others have reported the same problem. This is anecdotal evidence, but for this product to have such a high rate of controller failure means that I can not in good conscience continue to recommend it. Note, I found a less expensive replacement controller from Treadmill Doctor, which at least carries a 1 year warranty.

I've also added a link to the Gold's Gym Trainer 480 owner's manual page. The exact manual will depend on the last digit of the model number, 0 through 8.

At a Glance: Features of the Trainer 480

There are a lot of features in this low-cost, lightweight treadmill available from Walmart and various on-line retailers. Manufactured by Icon, known for such brands as NordicTrack, Pro-Form, and others, this treadmill offers one-touch speed and incline adjustments, a heart rate monitor, 4 pre-set weight loss workouts, and 4 cardio workouts. It does not have any upper-body resistance attachments, but comes with a set of 1 pound hand weights which are incorporated into the weight loss workouts.

Features missing that some more expensive models offer are an mp3 player port for playing music through the treadmill, and an Internet connection for downloadable workouts from i fit and similar organizations.  You also cannot store your own workout programs. 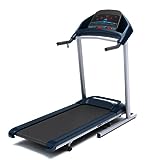 Specifications of the Trainer 480

Real World Observations of the Trainer 480

Assembly: The manual says that assembly requires 2 people, but I took my time and put it together myself. It took about 90 minutes.

The unit appears to be well made, but consisting of fairly lightweight components. It is best suited to light-to-medium use, and may not withstand rigorous daily use by multiple people. It is intended for home use only. My wife and I have been using ours on average 3 times per week each for about 6 weeks, with no problems so far. I did have to adjust the belt tracking slightly, using the provided hex tool.

The Display - The console features an LCD display in the center, which provides feedback such as distance, approximate calories burned, speed, incline, and heart rate. During normal operation (not using one of the pre-set workouts), the display presents a 1/4 mile oval track, and shows where one is during the course of a session. It is supposed to be "motivational," and I suppose it is, as I find myself not wanting to quit without completing the current 1/4 mile lap.

The heart rate monitor seems a bit inconsistent. Holding onto the grips loosely, the heart rate varies widely moment to moment, by dozens of beats per minute. Gripping the sensors firmly and with as little movement as possible yields better results, but ocassionally there are still fluctuations of 8-10 beats per minute. Use it for general trend analysis only.

There are 3 other areas of the display, the main one, and two smaller ones side by side under the large one. The main one alternates between elapsing time, distance, and calories. The smaller ones also alternate, showing incline, speed, heart rate, and again, calories. The displayed values can be changed by pressing the "Display" button, which will cycle through the various readings in the large display.

During the pre-set workouts, the displays are slightly different. Instead of the track representation, you're shown a bar graph of up-coming speed changes. Instead of elapsed time, you're shown time remaining in the workout. All workouts are 30 minutes in length.

The belt is a bit smaller than some we've evaluated. At 6'1"" with a fairly long stride, I have to focus some attention on staying centered and forward on the belt. This gets easier the more I use the treadmill, and isn't a problem at all for the other members of the family.

Thinking that I needed to work on cardio more than I needed to lose weight, I tried starting out on workout #5, the easiest of the cardio (ie; "performance") workouts. At 51 years old and in mediocre condition, I petered out about 1/2 way through and had to revert to manual mode. Reality now firmly in check, the next time I went with #1, the easiest of the weight-loss workouts. This was no challenge. A few days later #2 was only slightly more difficult. #3 proved somewhat challenging but no problem. #4 - well, workout #4 kicked my butt. At least I could complete it. I'd found my level of training, and completed the next month training primarily on workout #4.

Results: After about 10 days and 4 workouts at #4, I found noticeable improvement. It was still extremely hard, but didn't completely wipe me out anymore. Another month averaging 3 sessions per week, and I can complete the workout and have quite a bit of steam left over, so I've been adding some time and speed at the end. With no other conscientious change in either diet or lifestyle, I've lost about 5 pounds, but your mileage may vary.

Other reviewers have remarked that the 1 pound dumb-bells are too light to do any good. I disagree. I definitely feel I've had more of a full-body workout when I've used them. Also, while I realize 1 pound weights will not help anyone "bulk up," I've noticed a marked improvement in upper-body tone, and less flab and sag in my arms and shoulders. One could always get heavier dumb-bells if desired, but these do make a difference.

Rating: For value, at $377.00 (Walmart) I'd give this unit 3 out of 4 stars.  Had the warranty on parts and labor aside from the motor been longer than 90 days, or if one could store one's own workout programs, this would have been higher.