What is Turmeric Oil? And where does turmeric oil come from?

Turmeric is a rhizome that belongs to the same family as another powerful medicinal healer, ginger. Originating in Madagascar, turmeric is a bright yellow root that gets its intense colour from a compound called curcumin, which itself has been researched upon to reveal a wide variety of health benefits. Turmeric also contains more than 400 documented compounds and substances, with many other substances that have still not yet been recognized in the medical field. It is a powerful healer with incredible potency and has been used since ancient times for food and healing.

Turmeric root is dried and cured, as well as powdered before sale and usage for common daily consumption. It has a bitter, pungent taste. For the extraction of turmeric oil, steam distillation of the roots is carried out from a solvent such as hexane. This process extracts the oils from turmeric, which contain the potent compounds that make turmeric oil highly valuable.

Here are just some of the many benefits of turmeric oil;

Where to Buy Turmeric Essential Oil: 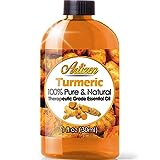 Turmeric oil is used in many skin creams and lotions for its cosmetic benefits. Here are some of the properties of turmeric that make it highly beneficial for skin:

Various studies have been conducted to provide evidence that turmeric is good for arthritis and inflamed muscles and joints. Research shows that compounds in turmeric oil show significant improvements in patients with osteoarthritis, pararllel to other widely used artificial drugs such as iboprofen, which may have unpleasant side effects. Turmeric oil is an all natural medicine to heal inflamed joints. Research also supports that turmeric is good for preventing and reducing inflammation in the eyes.

Turmeric oil is rich in many compounds such as zingeriberene and 6-gingerol, which are highly effective against digestive disorders and complaints. It helps fight gas and bloating in the digestive system. It also prevents ulcers in the stomach. Research also shows that turmeric can reduce diarrheoa, stomach pains and other symptomes of those suffering with Irritable Bowel Syndrome (IBS).

A commonly used spice in continental cooking, turmeric is often used in soups, curries and even rice to give a subtle pungent flavor as well as for its bright, popping yellow colour. It is also used in the food industry for natural food colouring, among others.

Turmeric oil is particularly beneficial for liver health as it is rich in a compound called A-Tumerone that supports healthy functioning of the liver.

Popularly known for its anti-cancer properties, turmeric and turmeric oil are used in both conventional and traditional medicine for its potency against tumors and cancer. Applying turmeric oil on topical wounds caused by cancer has also found to be relieving and useful in cancer patients. Turmeric oil is high in many anti-oxidants that fight free radicles and therefore prevent cancer.

Please ensure that you are not allergic to turmeric oil before use. Always dilute turmeric oil with a carrier oil before application on skin. Make sure you have organic turmeric oil for internal consumption. Never take turmeric oil directly, but dilute it with other substances such as water or milk. Do not take more than 3 – 5 small drops of turmeric oil per day. Turmeric oil is very potent, always discuss with your doctor before usage during pregnancy, breastfeeding and for babies. All rules and precautionary measures taken for any other essential oils apply for turmeric oil as well.