This article on luo han guo is mainly for my non-Asian readers. Luo han guo or monk fruit is very well-known and popular with Asians especially the Chinese and the peoples of Southeast Asia. Luo han guo is prepared as a therapeutic drink, which has many health benefits. The name luo han guo is from the Chinese name 羅漢果 (traditional, Pinyin luóhànguǒ). The term “Luo han” is equivalent to the English term “saint”. The Chinese term “luo han” was derived from the Sanskrit word “arahat”, meaning, a very advanced spiritual person, in the Buddhist context. For the lack of a better English term, “saint” would be the closest meaning. The word “guo” means “fruit” in Mandarin Chinese. So the correct literal meaning of “luo han guo” is “saint fruit”. So the common name of “monk fruit” is actually a mistranslation.

The name “luo han guo” most probably was derived from the monks using the fruit as early as the 13th century. Historical records showed that Buddhist monks had been brewing the fruit as a medicinal drink more than 800 years ago. Luo han guo only grew in the southern regions of China, with some in neighboring northern Thailand.

Inside Of The Luo Han Guo Fruit

Description Of The Luo Han Guo Plant And Fruit

The scientific name of luo han guo is siraitia grosvenorii, named after Gilbert Grosvenor, who as president of the National Geographic Society helped to fund an expedition in the 1930s to locate the living plants where they were being cultivated. The other two scientific names are momordica grosvenorii and thladiantha grosvenorii.

The luo han guo fruit is yellowish-brown or greenish-brown in color and covered with minute hair around it. The fruit turns brown when dried. The luo han guo fruit is distinctly very sweet, especially when brewed, without adding any sugar to it. It is said to be 300 times sweeter than sugar. It is therefore, not a surprise to find the Chinese using the luo han guo fruit as a natural sweetener for food as well as for the usually bitter Chinese herbal medication. The sweet taste comes from the chemical compound called mogrosides.

The luo han guo fruits can be eaten fresh, but mostly are dried for later use. The fruits are usually harvested fresh and then dried. When dried they can be stored for a long time. The fresh fruit has a very sweet fleshy pulp with many elongated seeds in it. When eaten fresh, the bitter rind can be used to make tea. When dried, part of the pulp and the skin turned into a thin brittle shell about 1 mm in thickness. The dried luo han guo fruit is brownish in color, with the minute hair still intact. The inside of the dried fruit consists of mainly seeds and the shriveled pulp.

Most of the cultivated luo han guo fruits come from the mountains of Guilin in Guangxi province. Guilin is the most natural scenic city in China, and its natural and unpolluted surroundings boast of residents who live past 100 years! There is a mountainous county called Bama (pronounced : Pa Ma) where many residents are centenarians!

The town of Longjiang (Dragon River) is called the "home of Chinese luo han guo fruits". There are many luo han guo factories processing the fruits in this town, and the biggest and oldest being the Yongfu Pharmaceuticals Factory. 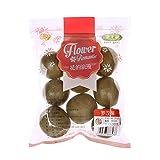 Traditionally, the Chinese use the fruit to prepare health drink, sometimes called “longevity herbal tea". The luo han guo fruit is used as an enhancer for food and soup, especially as a natural sweetener. This means, the fruit can be added to virtually any type of foods and drinks. This makes it a very versatile food condiment. In term of traditional Chinese medicine (TCM), luo han guo is a “cooling” fruit, meaning, it reduces “heatiness” and fever in the body. It is a good remedy for lung congestion, cough, phlegm and sore throat. It also promotes good bowel movements. It is also used as a sweetener substitute for sugar especially for people suffering from diabetes and obesity. Recent research has found that luo han guo has antioxidant and anticancer properties.

For the wider commercial market, luo han guo is available in numerous forms and with combination of other herbs and ingredients. In the market, there are luo han guo in crystal form, as a juice, lozenges, soluble cubes and the popular sachets. But nothing can beat the traditional whole dried luo han guo fruit, which is a guarantee that it is a genuine 100 pure luo han guo.

As I promised earlier, another article of mine will show you the simple recipe to prepare the traditional luo han guo health drink. Check this out: