Health Benefits and Dangers of Grounding or Earthing

What is grounding? It is where you punish your children and not let them go outside to enjoy themselves. Actually that is not the grounding that this is about. This article was written September 22, 2013.

The difference between plugs with 3 prongs and 2 prongs is that the extra prong is the ground. It is not needed for the device to work but to keep you from getting electrocuted and dying. It goes into the ground so that if there is extra electricity, it will go into the ground instead of going into you.

All other animals walk on the ground without shoes so any excess electricity in their body goes into the ground. With humans that are not grounded, static electricity can build and when they touch someone or something there is a spark and shock as that charge jumps. This means that excess charge can't wait to get out of you.

Also in attachment parenting the baby is held almost all of the time and this has a partial grounding effect on the baby or a full effect if the adult is grounded.

For example there is a grounding (earthing) device for a car where there is a mat on the floor and it is electrically connected to the body of the car to ground you somewhat.

Have you heard of PubMed Central (PMC)? They are part of the U.S. Library of Medicine that is one of the NIH (National Institutes of Health). They have an article called Earthing: Health Implications of Reconnecting the Human Body to the Earth's Surface Electrons. It says:

Conclusion: Emerging evidence shows that contact with the Earth—whether being outside barefoot or indoors connected to grounded conductive systems—may be a simple, natural, and yet profoundly effective environmental strategy against chronic stress, ANS [autonomic nervous system] dysfunction, inflammation, pain, poor sleep, disturbed HRV [heart rate variability], hypercoagulable blood, and many common health disorders, including cardiovascular disease. The research done to date supports the concept that grounding or earthing the human body may be an essential element in the health equation along with sunshine, clean air and water, nutritious food, and physical activity.

They have found that there are health benefits to the body being grounded a lot than when it is not. They can actually demonstrate the difference with a voltmeter. They say that they can test and see that the blood is thicker when someone is not grounded. Earthing is the new word for this science about being grounded.

Wellness Mama (picture on right) wrote an article on grounding called How to Get Healthy While You Sleep. It says:

Basically, there is a simple thing we can do each day that helps keep stress levels (and cortisol levels) in healthy ranges, can improve sleep and also reduce inflammation.

[cortisol-- A steroid hormone released by the cortex (outer portion) of the adrenal gland when a person is under stress. Cortisol levels are now considered a biological marker of suicide risk.]

I first encountered the idea of “Grounding” or "Earthing" when I read the book Earthing: The Most Important Health Discovery Ever [by Clinton Ober, Martin Zucker and Stephen Sinatra M.D.]. I’d seen information about this theory before but hadn’t looked into it.

According to emerging research, Earthing can be beneficial in:

Her article talks about how it is easier to sleep and you get better sleep by being grounded while you sleep. See device for this below. Research shows that abnormal cortisol levels are associated with sleep disorders, hypertension (high blood pressure), cardiovascular disease, decreased bone density, mood disturbances, abnormal glucose levels and autoimmune disease.

Can Earthing Help You with Weight Loss (Losing Weight)

I have not seen any mention of this in other articles. Maybe they are not aware of the latest on weight loss. The calories are not important. When people gain weight the body creates a hormone called leptin and this causes people to eat less and burn calories faster.

This is why my mother and I can eat as much as we possibly want and never gain weight. Many ballet dancers turn to bulimia to control their weight. My mother used to teach ballet at Jouliard's school of performing arts. Now inflammation causes people to become leptin resistant and they gain weight.

Dangers of Grounding or Earthing

Here is one danger. Now here is what the other articles on this are missing. Dr. Oz said the South lost the Civil War since they walked barefoot and got parasites. I looked this up and it said that there used to be a lot more parasites in the southeastern part of the U.S. In Africa they are looking for shoe donations so people can wear shoes there and not get parasites.

So I had to research this more. The main way that people get hookworm is walking barefoot on infected soil. The soil gets infected by the hookworm in the feces of people or animals. So wherever there are animals, there is a danger and animals are all over and they do not have bathrooms to use. The CDC (Centers for Disease Control and Prevention) says:

An estimated 576-740 million people in the world are infected with hookworm. Hookworm was once widespread in the United States, particularly in the southeastern region, but improvements in living conditions have greatly reduced hookworm infections.

Also from another page of CDC, Hookworm Infection and Animals:

Puppies and kittens are especially likely to have hookworm infections. Animals that are infected pass hookworm eggs in their stools.

For example, this can happen if a child is walking barefoot or playing in an area where dogs or cats have been (especially puppies or kittens).

But they are creating special sandals that you can wear so it is almost as good as walking barefoot as far as grounding is concerned. I saw a demonstration of this with a voltmeter. Also David Wolfe is an expert on raw foods and a millionaire so he can afford shoes. But he goes everywhere barefoot and has a device in his car to ground him when he drives.

He says he feels a difference being grounded so much. Note that both of his parents are medical doctors. I also saw a video where he said that he was juicing herbs that have anti-parasitic effect (hookworm is a parasite) like garlic, wormwood and black walnut hulls. He should have cancelled his date that evening but he did not.

He could smell the garlic coming out of his pores before the date. On the date the woman told him that he smells awful and that was the end of that. He could have canceled the date and told her why. Maybe honesty is the best policy in dating and relationships.

According to Dr. Sinatra if someone is on a blood thinner like Warfarin then they should talk to their doctor about lowering the dosage if they do earthing since otherwise it could make the blood too thin. Also this helps the thyroid gland so you should talk to your doctor about less thyroid medication.

More on Benefits of Earthing or Grounding

The fifth video below is a long video but on it Dr. Sinatra (M.D.) says that a study with rats showed that rats that were grounded had a lower blood sugar (diabetes causes blood sugar to be too high).

Dr. James Oschman (Ph.D. in Biological Sciences) says on that information page in the photos on this:

Inflammation in medicine is considered an important part of the healing process.

If you have your feet on the ground after an injury; If you fall down and hurt yourself, if you can put the injured area or put your feet on the ground, electrons will come in to your body and spread through your tissues. Any free radicals that leak into the healthy tissue will immediately by neutralized electrically. The electrons are negative, the free radicals are positive, they neutralize each other.

In addition to the above this webpage says that earthing or grounding reduces blood viscosity (thickness), improves cardiovascular health and improves the feeling of well-being.

A year ago I knew something about this and know about electrical grounding and was visiting Long Beach. For an hour I walked on the beach barefoot with the ocean water above my ankles and below my knees. Tons of people were there having a great time. Now some of that comes from being in the sunlight, the fresh air and being able to see the horizon but some of it could be from being barefoot in the sand and going in the ocean water.

I knew that being in the ocean water is grounding and is probably more effective than being barefoot on the sand. Now I felt great and wished I lived there so I could do that walk daily or at least a few times a week. Of course walking itself is also very good for heath and relieving stress.

Some people love gardening and this may be a big part of the reason why.

Children do not know about grounding but they love playing in the sand, digging holes in it building things with sand and even getting buried in sand. Maybe this is a big part of the reason why.

I know that when I do rock climbing I feel very good. I feel that my hands on the rocks may have a better grounding effect than than bare feet on the ground. Note that your feet can be on soil, grass, rocks or cement for it to work but it does not work with feet on asphalt. Also rock climbing provides resistance exercising helping to maintain muscles.

I know that it has a very powerful effect on making me feel good. So maybe people who love rock climbing love it partially because of the grounding effect. Also a couple of years ago I moved into a cabin in Southern Arizona. In the room where my desk is, there is a carpet and under that is cement. There is no basement. So I did not know much about earthing back then but I cut out the carpet below my desk so my feet could be on the cement and have a grounding effect hopefully.

Now I wondered if you had to sleep on metal foil for the grounding effect. But there is a cotton sheet that has silver threads in it. Then there is a wire that plugs into an outlet. They also have a grounding or earthing pad that you can put on your desk or on the floor under the desk. Below I will put a video of a demonstration of how it works with a voltmeter showing the difference.

Also I will put a video on how they use grounding to help competitors in the Tour de France race. They say that it is like doing 3 marathons a day for 22 days.

Quick 90 second message on what is earthing

If you can't sleep ... here's why! This goes into inflammation, free radicals, electrons, antioxidants, stress and cortisol in an easy to understand presentatio

Great video on Earthing / Grounding with Clint Ober and Dr. Christy Westen (D.C.) with testimonials from others including an N.D.

Earthing: The Most Important Health Discovery Ever!
Buy Now 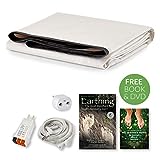