Himalayan crystal salt lamps are made from blocks of crystal salt rocks mined from the ancient dried-up lakes at the Himalayan foothills. They come in various shapes and sizes.

It was found that the miners doing the daily grind of mining of the Himalayan crystal salts from these ancient dried lakes though working deep down in the earth at depths of about 1500 meters surprisingly remained very healthy in spite of the extremely difficult working conditions there.

It was believed that the reason for their good health appeared to be their close association with these salt mines they were working in. Since times immemorial salt has been used as a preservative for food. It is also known that hot water springs are full of health-giving salts and rejuvenate one's body.

Since olden times people have been coming to get rejuvenated and destress themselves, in salt mines and caves and getting a natural salt therapy. It has been found that salt mines have an excess of negative ion environment. It is known now that salt ionises the air naturally with negative ions.

It has been established by way of published studies that negative ions have positive or healing effects on our body. They clean the air of pollutants and remove the positively charged ions. 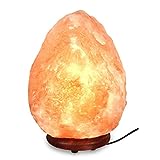 How Are Positive Ions Produced

Positively charged ions have been known to cause :

It has been found that if we happen to be near a waterfall, the seashore, on a mountain top or closer to nature, we breathe much easier and experience a release of stress. This also happens after natural phenomena like rainfall and thunderstorms. the reason being that the natural production of negative ions during these natural phenomena produces negative ions which neutralise the positive ions present leading to an excess of negative ions in the atmosphere and the consequent effects.

It is very easy to produce these beneficial negative ions by using Himalayan crystal salt lamps.

How The Crystal Salts Lamps Work

It is known that salt attracts moisture which condenses on the surface of the crystal salts lamp. Once the lamp is put on, the heated salt crystal causes moisture condensation on it which causes the electrically bound sodium and chloride to split into the positive sodium and negative ions. Simultaneously, the water evaporation causes it to split into 2 negative hydrogen ions and 1 positive oxygen ion.

What Are Himalayan crystal salts? Read My Article At The Link Below

These benefits can be obtained on a smaller scale in the house or office by the use of Himalayan crystal salt lamps, the natural lamps. These lamps are lit by small light bulbs that are pushed in through at the base. Fused bulbs can be replaced very easily. It is better to spread out a few small lamps evenly rather than have one big lamp in a large area.

Please Cast Your Vote. Thanks.

3.8 out of 5 stars from 10 ratings of Health Benefits Of Himalayan Crystal Salt Lamps

The information provided in this hub is not a substitute for professional medical advice. Please consult your physician, or healthcare provider before taking any home remedies, supplements or starting a new health regime.

Some of my other hubs on Health Topics

How Himalayan Crystal Salt Lamps Protect You From EMF's

How Electric Assembly Is Done On The Carved Lamps