What is Gestalt Therapy?

On beginning my research into how GT views depression, I found it quite difficult to gather much information on depression specifically (or any other DSM-IV categories). Perhaps this is/was due to the fact that in traditional Perlsian GT the person is viewed holistically and seen as more than a sum of their individual parts and hence, as such there has been a reluctance to diagnose patients least we view them as I-it rather than I-thou.

Modern Gestalt therapy argues that diagnosis works well in conjunction with GT, as the I-Thou, I-It relationship can change quite rapidly during a session and it is useful for the therapist to review the fixed gestalt patterns week-to-week as well as during the session. (McKeown, 1999)

The therapist can then come up with a plan of interventions and yet be ready to work with the client’s unfolding process in the here and now. Using field theory we can explore how being diagnosed with depression has effected the client’s relationship with significant others, in society, their job, both before they knew what was “wrong” with them (as one client puts it) and after they were diagnosed by the medical profession.

As with any interruptions in the Gestalt contact cycle, at one stage in our lives the creative adjustment served us, (or we would not of survived the traumatic experiences at that time) but now in our adult lives, they have become fixed rigid gestalts that hinder us, in contact with others and ourselves. Through assimilating, looking at and expressing our introjects, projections and then retroflections, we can evaluate what values we own for ourselves and those which no longer serve us and limit our way of contacting.

How Does Gestalt Therapy View Depression?

Depression is seen in Gestalt as unsatisfied needs. “When expression is overt, there normally is a release of pent up energy – for instance, the seeming lethargy of depression will if unblocked, be replaced by what it concealed and held in check: raging or the clonic movements of sobbing.” (PHG, )

Gesaltists would argue that depression has a meaning for the client and it often suppressed anger which the client flattens because of introjects or projections.

Depressing emotion is a retroflection, which Gestalt therapy would aim to work with gradually and carefully to undo as it is seen as a creative adjustment that became a depressive adjustment that has become a fixed Gestalt. Removing a fixed gestalt suddenly and without integration could lead to mobilizing the client into the action stage of the contact cycle, which in the case of depression may lead to suicide etc.

Retroflection is defined as an action that was once directed towards the environment but was turned back against oneself. (PHG, )

The Role of Retroflection

There are many contact styles in the clients’ process but the main way people block contact with depression is through retroflection. The contact style of retroflection is an economical mode of contact in energetic terms. A person does not give out his energy but turns it back to himself.

Many diagnoses of depression have been made when the person has been hiding abuse, etc. and the client has recovered once the abuse has been acknowledged and integrated. The client limits his ability to stay in conscious contact with his environment here-and-now. He is not able to react in accordance with his actual need but his behaviour and present experiencing are determined by fixed patterns. He follows a habit, not a conscious choice (Yontef, 1993). Depression is a fixed gestalt.

From a Gestalt perspective symptoms are products of a creative self and display human uniqueness (Perls, Hefferline & Goodman, 1990). Symptoms such as low mood, suicidal thoughts, increased tiredness etc. are phenomena that accompany depression. Gestalt therapy focuses more on the specific generating process of depression (Greenberg, Watson & Goldman, 1998). In Gestalt therapy the symptoms are viewed not as discrete items but as a narrowed spectrum of functions (Zinker, 1978).

Interruption of a contact cycle: Typical manifestations of depression

The loss of the creative adjustment manifests in a particular withdrawal of contact. A depressed person lacks the self-confidence, will and motivation to contact. We can watch the repeating pattern of an interruption in the contact cycle (Mackewn, 1999).

How does Gestalt therapy treat depression?

During therapy clients first learn how to accept support from their surroundings and then they create a system of self-support by themselves. The work centres on a primary task of creating a safe environment, a safe relational field, in which the patient’s self-healing powers can be activated.

In case or repeated experience of limiting, threatening or misusing environment the person cannot acquire the whole spectrum of self-functions. He needs to create them during the process of ongoing therapeutical relationship (Zinker, 1978).

Gestalt Therapy looks at the overall field of the client and views the client as a whole rather than just a sum of his parts. We would not say the client is depressed but is depressing in our contact with them within the therapeutic setting as well as outside the therapy room in his interactions with others. The therapist when treating depression as the presenting problem, can benefit greatly from knowing the medical diagnostics of the symptoms of depression but should be mindful not to label the client as being depressed and therefore, not seeing the person as a human being. In therapy, we would ask the client to explore what it means for them to be diagnosed with depression or to feel depressed.

In the starting stages, it is useful to take the client’s history to get an overall picture of their environmental field and the part society has played as well as psychological and biological factors. As in the case of x, whom after speaking of his sickness and the ‘bad’ part of him, he mentioned he found it beneficial to break from his old peer group as “they still occasionally took drugs”. This then led me to wonder if the drugs played their part in tipping the balance of his moods during withdrawal, as well as the many other influences in his life.

Working with Depression – Undoing the Retroflections

Interventions during the first session are to bring the clients awareness to how he interacts with me, as this can be a microcosm of how he relates to people outside the session, as in lack of eye contact, looking around the room and shifting about on the chair. Focusing on just one of the many retroflected behaviours or bringing some awareness to them, can get the client into some contact with his body and how limits his contact.

Even the breath can be held, swallowed or constrained in a retroflected way to avoid fully feeling or allowing excitement to rise and this leads to anxiety which is seen as excitement unsupported by breath. Retroflection is usually the result of doing to oneself that which one wanted to do to others but held it back and this is evident in the client’s musculature. Often when there wasn’t full expression or the movement was limited early on, there can be an equal force of antagonistic and agonistic forces holding the muscle equally in opposite directions. He abandons any attempts to influence his environment. He becomes a separate and self-sufficient unit. Energy becomes interpersonal and he limits traffic between himself and environment. Polster & Polster. Pg.70.

We would also look to bring the clients awareness to the introjects (messages they took in from youth, etc) on why they are unable let go of tensions, i.e., “women shouldn’t be angry”. Then over time, look at the projections, “they wont except me if I really tell them how I feel”, and then to notice the tensions in the client’s body as they say these things and bring their attention to their body. Dialoguing between the different body parts and describing them or getting the client to use ‘I’ statements can all help in experiencing this tension, or staying in the impasse and agitating it by staying in the not knowing for long enough will eventually create enough tension in the body (which cannot be held forever in awareness) until the body starts to implode and then explode, as a healthy organism will eventually return to homeostasis.

Attention to physical behaviour to see where the battle is taking place during the retroflected activity can be achieved by examining posture – gestures and movement. Polster & Polster.

After any experiment in raising awareness such as working on the body through dialogue, fantasy, or psychodrama, it is important to get the client to repeat key phrases or bring the client into awareness further by asking them what they learnt from the experiment and what it meant for them. The therapist’s task is to enable the client, even in the most incremental way, to express the energy, which he experiences within himself (Zinker, 1978). Work with developing expressive movement requires a base of awareness, relationship to the therapist, and a well-managed therapeutic context. (Mckeown, 1999)

Effectiveness of Gestalt Therapy When Working With Depression

The problems in working specifically with depression as a separate condition in Gestalt are listed below:

Gestalt therapy is finding its place in clinical practice. There is still little research into the Gestalt therapy of depression. It seems that the effectiveness of Gestalt therapy is comparable with the other therapeutical methods, for example with Cognitive Behavioural therapy (Rosner, Frick & Beutler, 1999, Beutler, Engle & Shoham-Salomon, 1991). The effect of a therapy based on a supportive therapeutic relationship may be increased by the use of specific interventions focused on emotions in ways that are typify Gestalt therapy (Greenberg, Watson & Goldman, 1998).

Other research indicates the Gestalt approach is especially effective in the therapies of internalizing clients who deal with depression in intrapunitive ways (Beutler, Engle & Shoham-Salomon, 1991).

I believe that by learning more about the DSM-IV diagnostic criteria of disorders, that Gestalt can work in tandem with the medical profession and this knowledge will actually assist the therapist in working with clients that are referred on by doctor’s etc with various mood disorders. 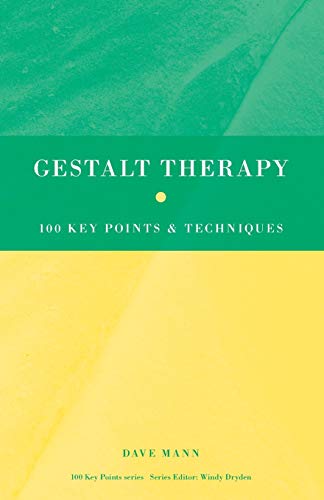