How I Lost Weight and Gained Health with Crossfit Workouts: Part 2, All About the Program

Aurelio has stuck with his three-times-a-week Crossfit regimen since 2010 and enjoys it for the workout variety and camaraderie.

This is part 2 of the series that began with How I Lost Weight and Gained Health with Crossfit Workouts: Part 1, Starting from the Bottom. You may want to read that part first, so you can understand this part thoroughly.

The email came from Darla, the wife of the Crossfit Brea owner. She expressed concern over my bad workout experience the previous day and asked how I was feeling. She said that not completing a workout was common for new clients, especially those who hadn’t exercised for most of their lives. There was no need to feel embarrassed because everyone knew what it was like to start and would be supportive. I could either see the workout as something impossible or something that could be conquered.

Her email impressed me because no gym had ever personally contacted me though I had joined a couple in my twenties. My partner had also earlier reminded me that my decades of inactivity could not be overcome in just one evening: I should be proud of even completing the warm-up. Both their acknowledgements made me feel good about my trying the previous day.

Darla talked about scalability, an important component of Crossfit. Though everyone performs the same exercises at the same time, the movements are normally adjusted for fitness level.

You can only participate in Crossfit as part of an organized one-hour class held several times a day unless you are highly experienced or training for a special event. The WOD or Workout of the Day uses the same exercises performed in the same sequence for a particular day. But then it changes completely the next day. You could be running for endurance one day; hauling weighted sleds and kettle bells the next day; and doing jumping jacks, pushups and pullups the next.

This variety keeps each workout fresh and stresses different parts of your body to encourage muscle growth and endurance. The training also emphasizes whole body fitness rather than specializing in any muscle. Unused parts are given the chance to recover from the previous day’s WOD as new body parts are used..

A list of exercises for a sample WOD can consist of the following:

The actual timed workout then consists of eight sets of the following exercises performed as quickly as possible:

The average time to complete this is about 20 minutes. Though you could write down your time in a notebook for record-keeping, there would be no point. You would probably never perform this sequence of exercises again.

You’re not allowed to participate in the regular WODs until you complete a week’s worth of learning workouts. These generally consist of three classes where you learn the fundamentals of Crossfit exercises such as Olympic weightlifting, kettle bell swings and calisthenics. Though the beginning sessions end with a light workout, they’re mostly about learning new techniques.

I’d started with such a beginner’s session but found that difficult. Darla said she could scale even the warm-ups down, perhaps starting me on one round of runs rather than three. With this assurance and my partner’s encouragement, I resolved to start at Crossfit again with the next beginning session.

You can continue this series in Part 3, Results. 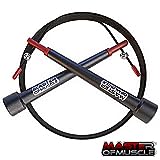